Aconcagua summit day: Why I decided to turn around

”Attempting Aconcagua was a pretty big leap out of my comfort zone compared to what I’d done before in terms of altitude but also and probably more noticeably the length of the expedition and the mental and physical stamina required. I’d been nervous beforehand, of course I had, but the 360 team had been there for plenty of encouragement, support and advice in the build up. Once the expedition got underway and I met the team and our guides those nerves switched to excitement pretty quickly. The team was great and our 360 guides were awesome. They were super supportive and encouraging, incredibly knowledgable and clearly highly respected by other climbers and guides on the mountain. I felt really confident and comfortable to be climbing with them I knew I would have the best shot at reaching the summit while having an awesome adventure and staying safe along the way. Another superb trip and amazing experience thanks to 360 Expeditions.”

I’ve started trying to write down some of my memories from Aconcagua, just for my own entertainment really. The thing lots of people seem to be particularly interested in is the summit day decision to turn around and assume that it must have been really difficult. So for anyone genuinely interested, and it’s a lengthy post, here’s that day as I remember it….

We pick up the story late morning after the stop at Independencia Hut where the crampons went on.

Now on ice, with extra weight on my feet I think I could tell within an hour or so of leaving the hut that I was struggling. I’d started getting clumsy, tripping over my own feet and snagging my trousers on my crampons. That wasn’t right, while I’m no expert I do know how to walk in crampons. I had, after all, done it for more than ten hours on Aneto last winter. I don’t really know how long we spent on that exposed traverse but it continued to get harder. However much food and drink I put in I couldn’t seem to get enough energy to my legs. My breathing was getting erratic, I remember grasping at the buff protecting my face with my huge down mitts in a slightly frenzied bid to get more oxygen in. But I kept going, one foot in front of the other. Mostly. Some time later, two or three hours perhaps or maybe less I genuinely have no idea, I’d literally just finished a conversation with main man Gianni about the fact that the cave where we would have a proper rest was only 15 minutes away when I had an absolutely overwhelming desire to sit down. My legs were giving up on the idea of moving uphill and my breathing was too fast and inefficient but I couldn’t control it. Exactly what happened next I’m not sure, but the next thing I knew I was sitting on the scree next to the path with Gianni perched downhill to ensure I wouldn’t slip down. I was definitely sitting and not lying, I hadn’t just keeled over sideways, but I’m not sure it was a move I had any real conscious control over. At 6,500m air pressure is just under half of that at sea level and hypoxia is normal so everything was definitely a little bit blurry around the edges for almost everyone other than regular mountain dwellers by then. A teammate told me later that he’d been asking me questions (surname, year etc.) and whether or not I knew the answers is barely relevant, the truth is I don’t remember that conversation even happening! It somehow surprised me when the guides first mentioned turning around, weirdly I don’t think I’d thought about it. Not because I wasn’t aware how I was feeling or because I was against the idea but somehow I had been so focused on walking and breathing that I’d not thought about much else for a while. 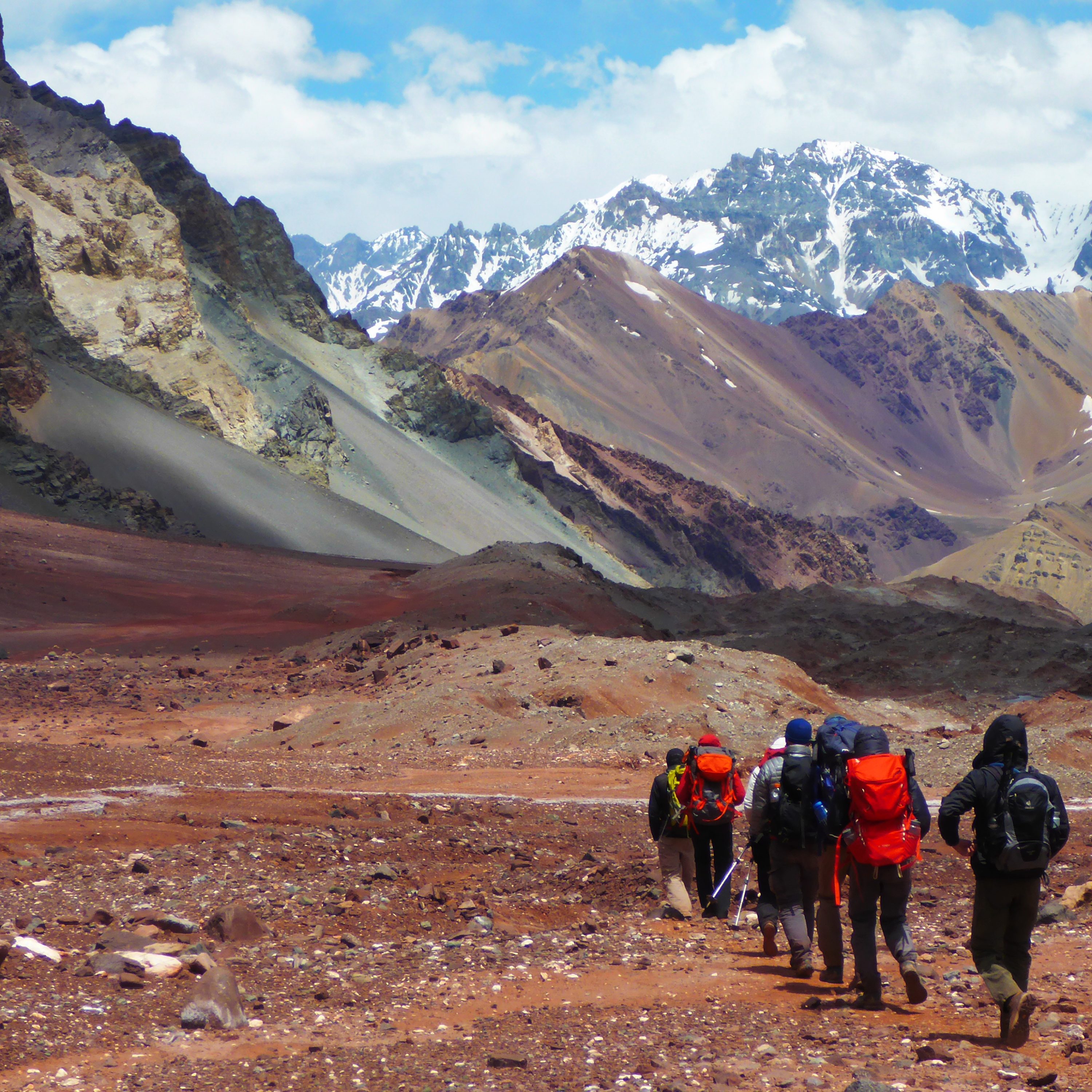 People keep asking me if it was a difficult decision to turn around and the truth is not really, it probably took two or three minutes. The first of which was spent arguing out loud with myself muttering ‘I’m not a quitter’ over and over again and attempting to negotiate with Gianni for ‘one more chance’ to see how much further I could get. Fairly quickly though, several things became increasingly clear to me. The first was that although I could probably get a bit further it was highly unlikely I could get to the top, and certainly not in a state to be capable of getting myself down again. Secondly I knew we had the canaletta, in many ways the crux of the ascent, still to come and that that would be a more dangerous place to pass out! Thirdly, I didn’t want to be a liability to the rest of the team in terms of safety or summit chances. A guide well known by ours happened to be passing with a client on the way down and offered for me to descend with them thus leaving both ours with the rest of the team. That seemed like a good plan. Fourthly, and in many ways the most simple and blindingly obvious was that I’d promised myself and a lot of people at home that I would listen to Gianni. He knew I wanted that summit and wouldn’t have turned me around lightly I’m sure, but I knew that if he said it was for the best then it was. I was still able to think clearly enough to recognise that I might not be thinking entirely clearly. It felt very much like my own decision when it really came down to it, he had agreed I could attempt to keep going and see if I could reach the cave if I really wanted to, but he was also fairly direct about the fact that he didn’t think it was the best plan. So that was it, decision made. 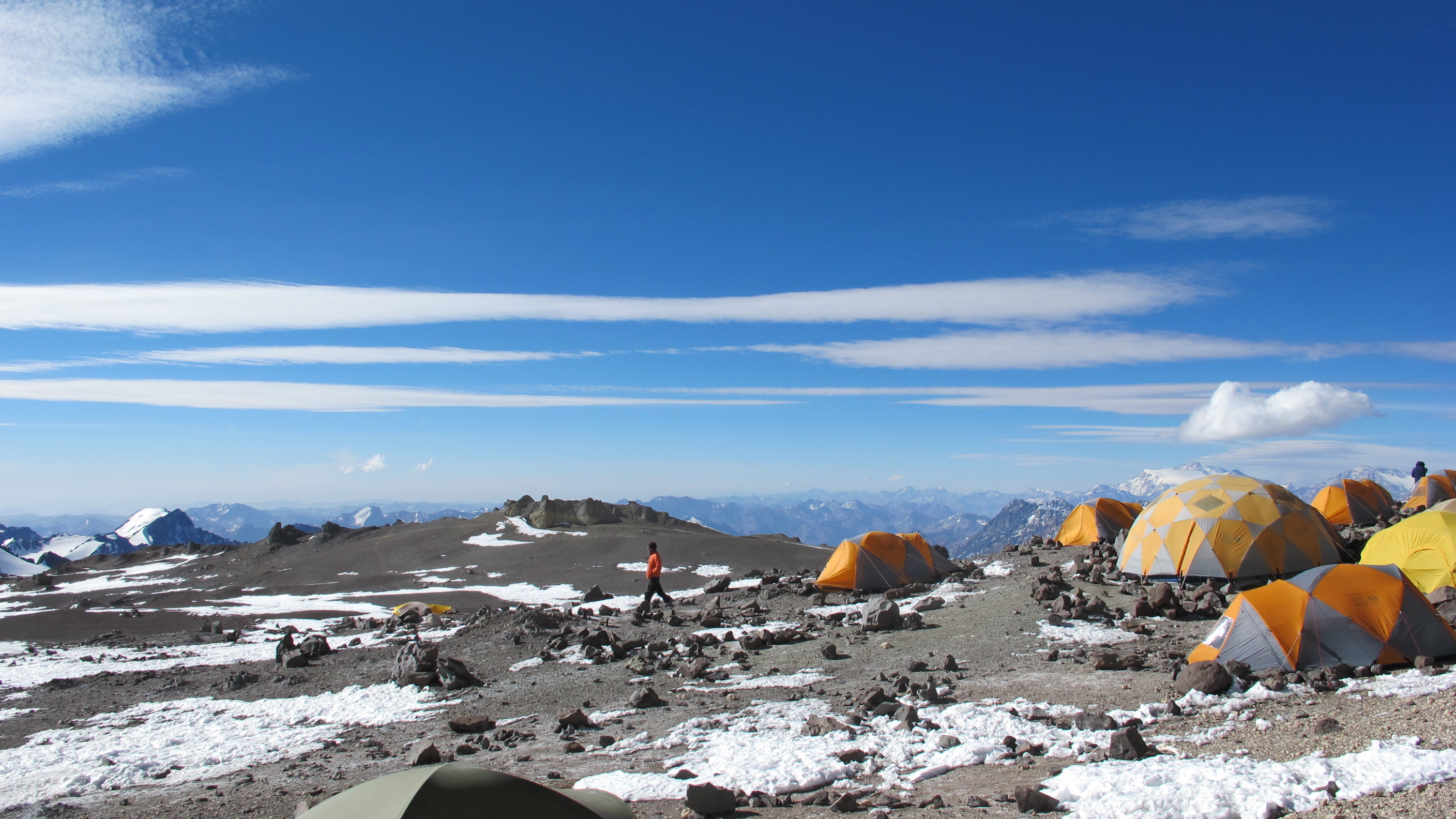 After a brief exchange of well wishes with the rest of the team they had to get moving, they couldn’t hang around losing time and getting cold. Nanika (our other guide) stayed with me until I’d had yet more to eat and drink and taken a few photos then shot back up to catch up with the team. I descended with the local guide, and his Austrian client. I actually really enjoyed the slow walk back down to camp. It was a relief on the legs to be going downhill, and I had chance to take in the amazing views in the afternoon sun. I was roped to the guide for safety initially (I think he was called Jeremiah or something similar but more Spanish sounding) but after a while he was obviously more confident I could walk and wasn’t going to fall off the mountain! We picked up another guy along the way who had dropped out of another team and we talked most of the way down about how we felt about not reaching the summit. The overriding consensus was that yes, it would have been fab to get to the top but for us it wasn’t meant to be that day, that we had all made the right decision and should all be really proud of that and that it was still a massive achievement to have survived two weeks on expedition and to have got as far as 6,500m. I felt super positive by the time we got to camp and was treated to the most amazing and beautifully peaceful sunset as I sat on the edge of camp 3 looking out across the mountains. I was delighted to hear via radio that four of the team had reached the summit with Gianni. Ace! 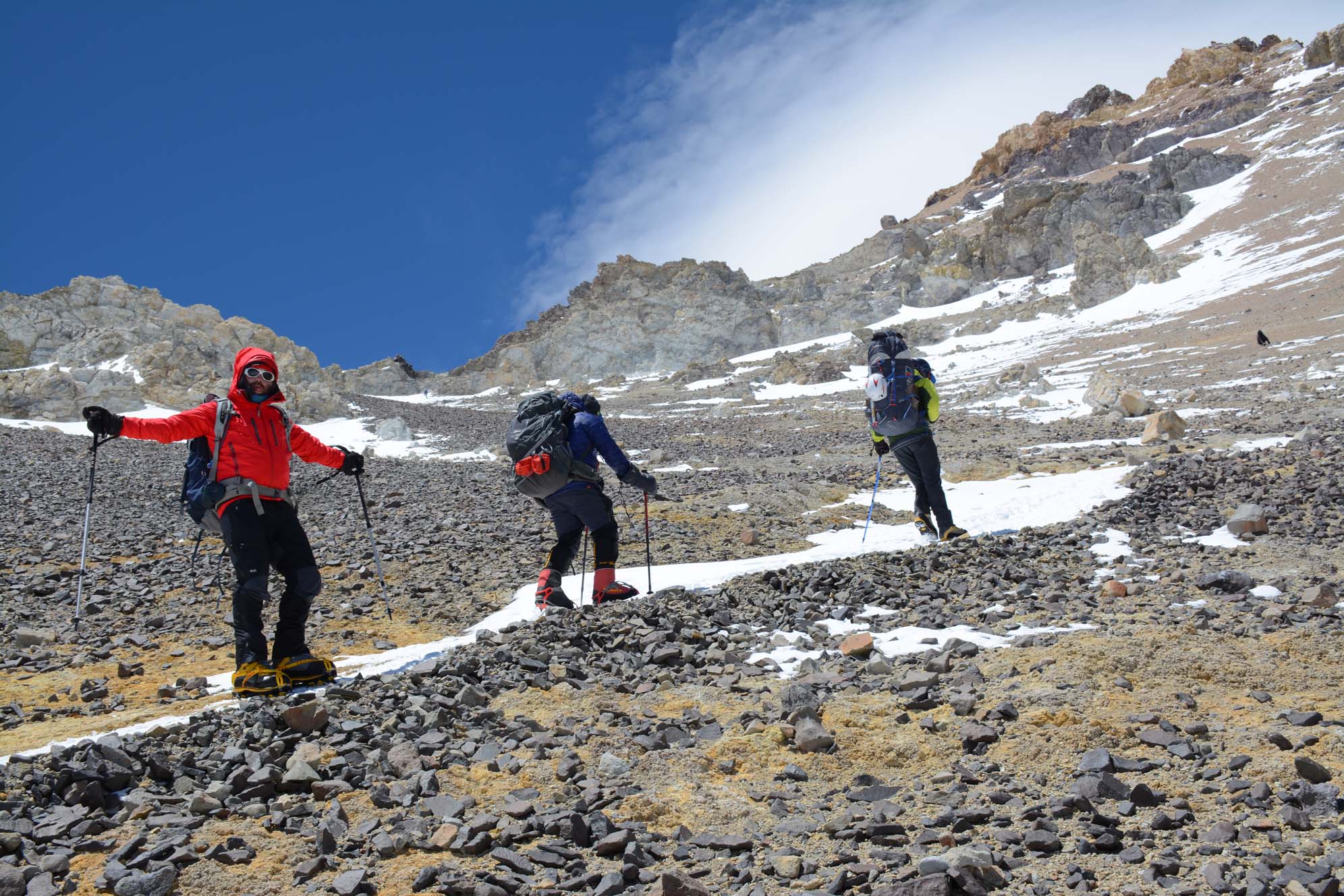 I think the most grumpy I felt at myself about the failed summit attempt was the first couple of hours the next day during the long descent from camp 3 to base camp. I’m generally a bit grumpy in the mornings anyway, really not a morning person, so I don’t think anyone else really noticed! I just kept my thoughts to myself and plodded on down. And actually it was basically impossible to stay feeling grumpy or negative for very long because it was sunny and I was in an awesome place surrounded by beautiful and inspirational mountains and in the end I just kept thinking how awesome it was that I’d even had the chance to try.

As I posted on facebook at the time, the failed summit doesn’t take away the awesomeness of the experience, the beauty of my surroundings, the stars and the sunrises and the sunsets and the condors! It doesn’t take away from the fact that I threw myself wholeheartedly at an expedition that when it was first suggested to me in the days after Kilimanjaro I had dismissed as ‘too hardcore for me.’ It doesn’t takeaway the fact that I got myself to 6,500m, higher than I’ve ever been before, and that I got myself safely back down again too. It doesn’t take away the fun we had playing Shithead for hours on rest days or the amazing steak and wine I enjoyed when back in the city. In some ways the summit doesn’t seem as important as all that compared to those things.

And yet, that mountain still calls to me! I will go back I feel sure of it, better prepared and physically stronger. Maybe soon or maybe years down the line, I haven’t decided yet. I may or may not get as far, or further, or not. But I’d give anything to live that experience again and to have another chance to try.