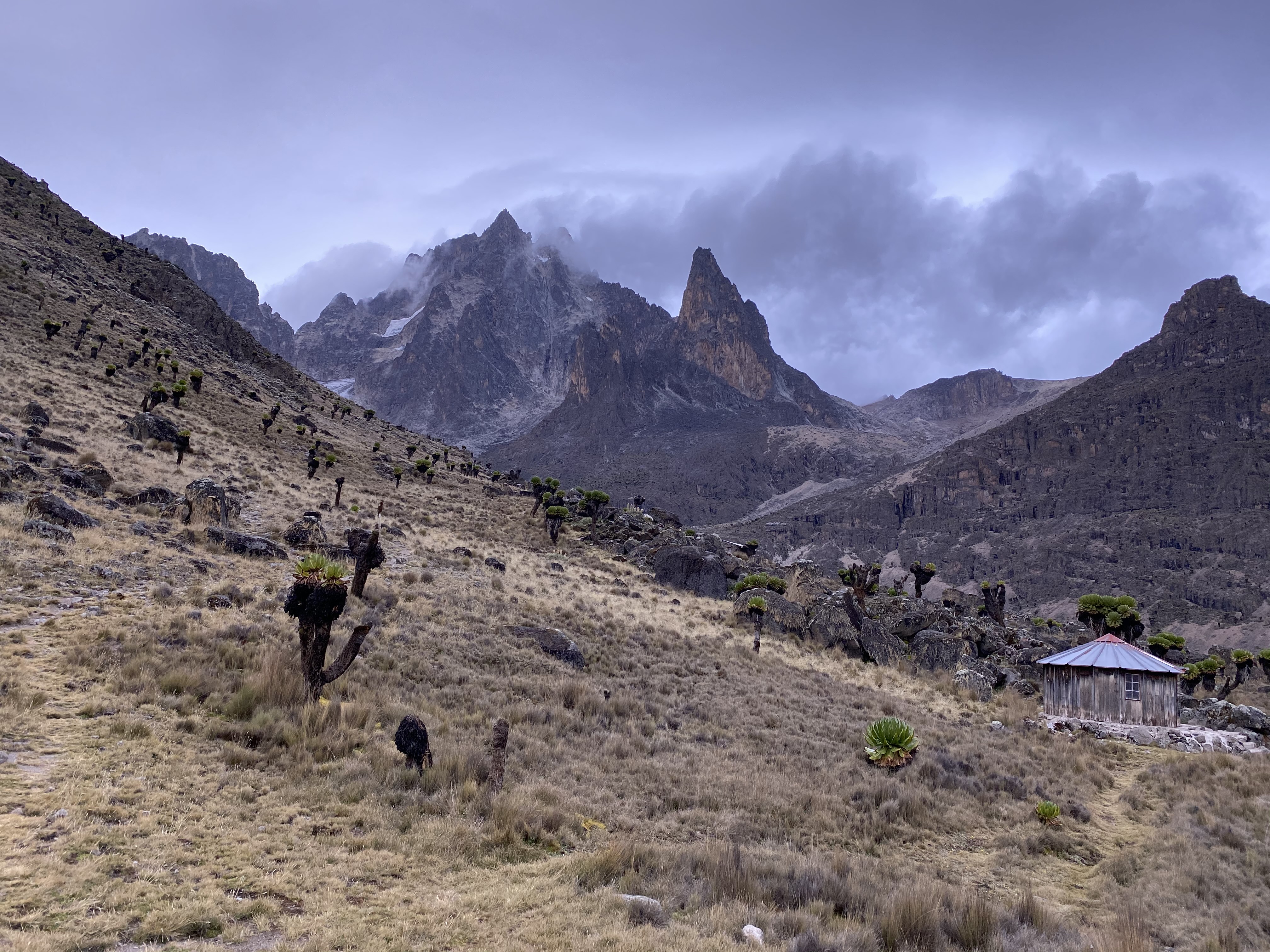 We started our trip by meeting at Nairobi airport, welcoming us was traditional Kenyan dancers which certainly set the mood for the trip and announced our arrival in Africa!

Our lead guide for the trip, Ken, met us with a warm broad smile and he introduced us to our other guides, and we head off for the hotel.  Rain had been forecast for the week and as we eat lunch, the heavens opened and more rain than I’ve ever seen deluged upon us, as we moved from sitting in the garden, to the terrace and finally being beaten back to the inside.  Nevertheless, a nice buffet style lunch was put on for us and a few tuskers were enjoyed as we got to know each other.  Our group comprised of 7 fellow adventurers, and it transpired from the group, 3 would be going for the trekking Summit of Point Lenana, (4985m) which 4 hardy adventurers would be going on to attempt the more technical climb off Bation. (5199m).

Our group included a mixed group, 4 guys and 3 girls, all with mixed experience, some were keen trekkers, others were keen climbers and it would be their first time at altitude.

We had been told off how beautiful the trek to the summit would be, that we may even see some wildlife in the national park as we made our way to Chogoria Gate.  We were a little disappointed not to see a few elephants, but we saw various monkeys as we wound our way through the rocky path towards the start off the trek.  A quick packed lunch of egg, chips and Ribena gave us all a good laugh and a retro start to the trip. 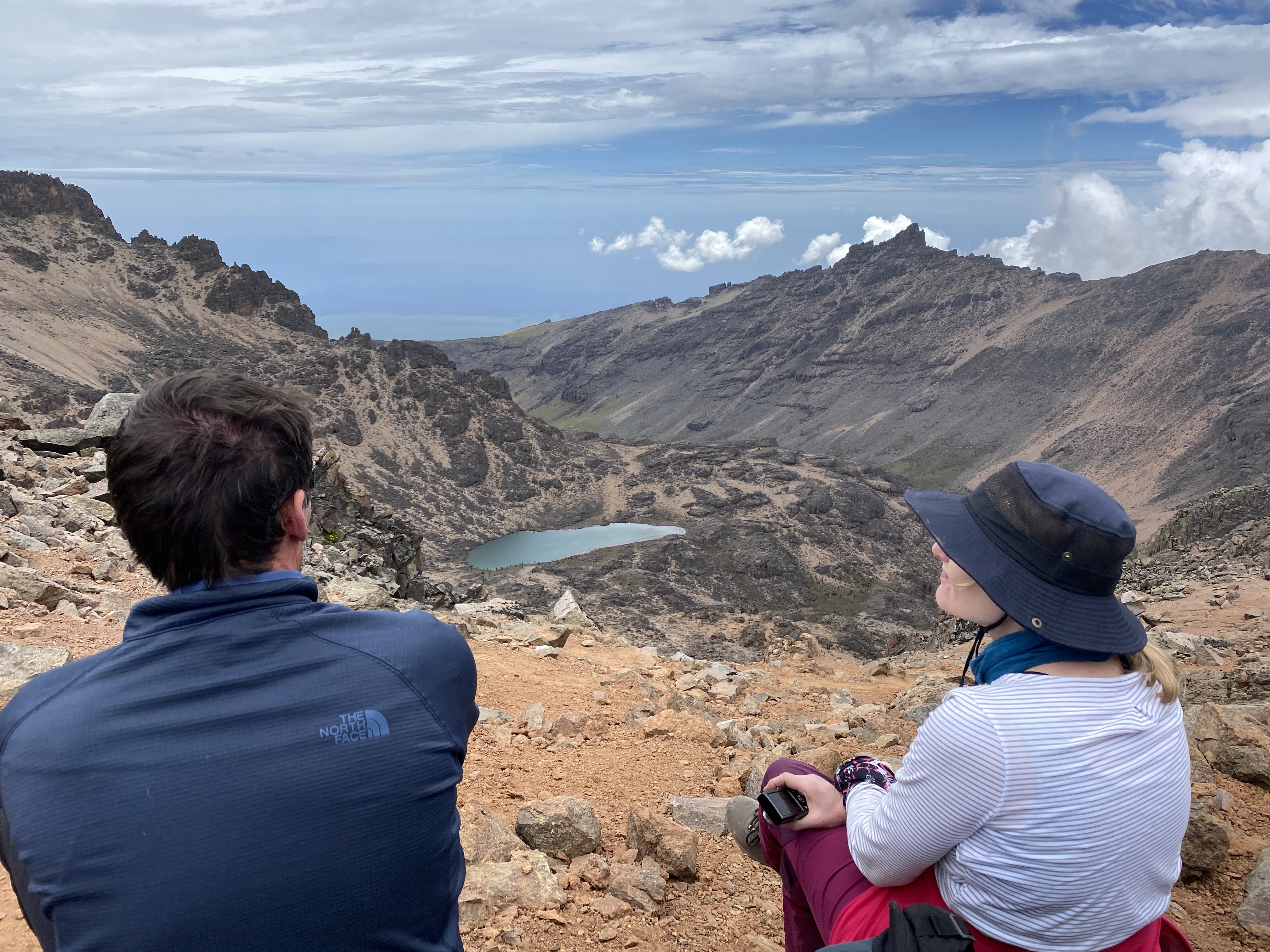 We set off for Lake Ellis, situated at 3600m, it would be our first campsite off the evening, the trek was easy going, only around 400m, we were informed off the wild herbs and wildlife, we could certainly see evidence that Elephants had been there not long before going by the poo on the trail!  The smell off lemongrass and heather made for a lovely calming first day off hiking.  The first site was beautiful, set on the lake, and we tucked into our dinner off fish and potatoes.  During the night the smell off camp brought some Hyena’s to near the camp and we heard their calls during the night.

The following day was some of the most stunning views I’ve seen in my years trekking, we climbed to 4200m and looked down at our camp for the night sitting in a large gorge, truly stunning views. we reached Lake Michaelson, a glacier lake, and marveled at the Rock Hyrax jumping all around the camp.   This is the camp that an old leopard used to prowl around picking off the poor Hyrax, but he has not been seen for many years.  Welcomed with popcorn and biscuits, we settled in for a relaxing afternoon, a few brave souls dipping various parts of their bodies into the icy cold lake!

An early start to day 5, our target was Austrian Hut at 4750m, we hiked through the gorge, and we really got to see the jagged peaks off Mount Kenya up close for the first time, as a trekker, they looked particularly gnarly and I wondered how we would even get up the trekking peak!  Our hike up the gorge took us through some stunning scenery, pictures won’t do it justice, the look back was as good as the mountain ahead and we made it to camp for around 2pm after passing over the ridge, clear views showed us mountains in Uganda off in the distance.  The altitude was taking its toll on a few people now, a few headaches had appeared in the group, so some retired to tents to relax.  Rolfe our guide who never sits still for more than 30 minutes had itchy feet, and he set off to the trekking summit with Danny, who was suffering a little to help him get a little higher hoping it would relieve his headache the next day for our morning summit, the weather was looking good, so on his return he asked if anyone else wanted to go up, and both Bill my tentmate and me head up for an afternoon summit, unfortunately the weather had clouded over but the trek to the top was certainly a memorable one.  A large metal rope had been put in as the trek is a little jagged going up, and i decided to put my trust in it, lungs bursting as I tried to keep pace with Bill and Rolfe who its fair to say are both slightly fitter than me!  Bill reached the summit about 10 minutes before i did, and I met him and Rolfe coming back down, Rolfe persuaded bill to come back up again and then rather than using the built in ladders to get to the summit, he challenged us to climb the last few meters, being a first introduction to scrambling for both of us, we were very nervous but it added to the feeling off achievement after thinking “there’s no way I can climb that” and then doing exactly that! It was great to summit and a day early too. 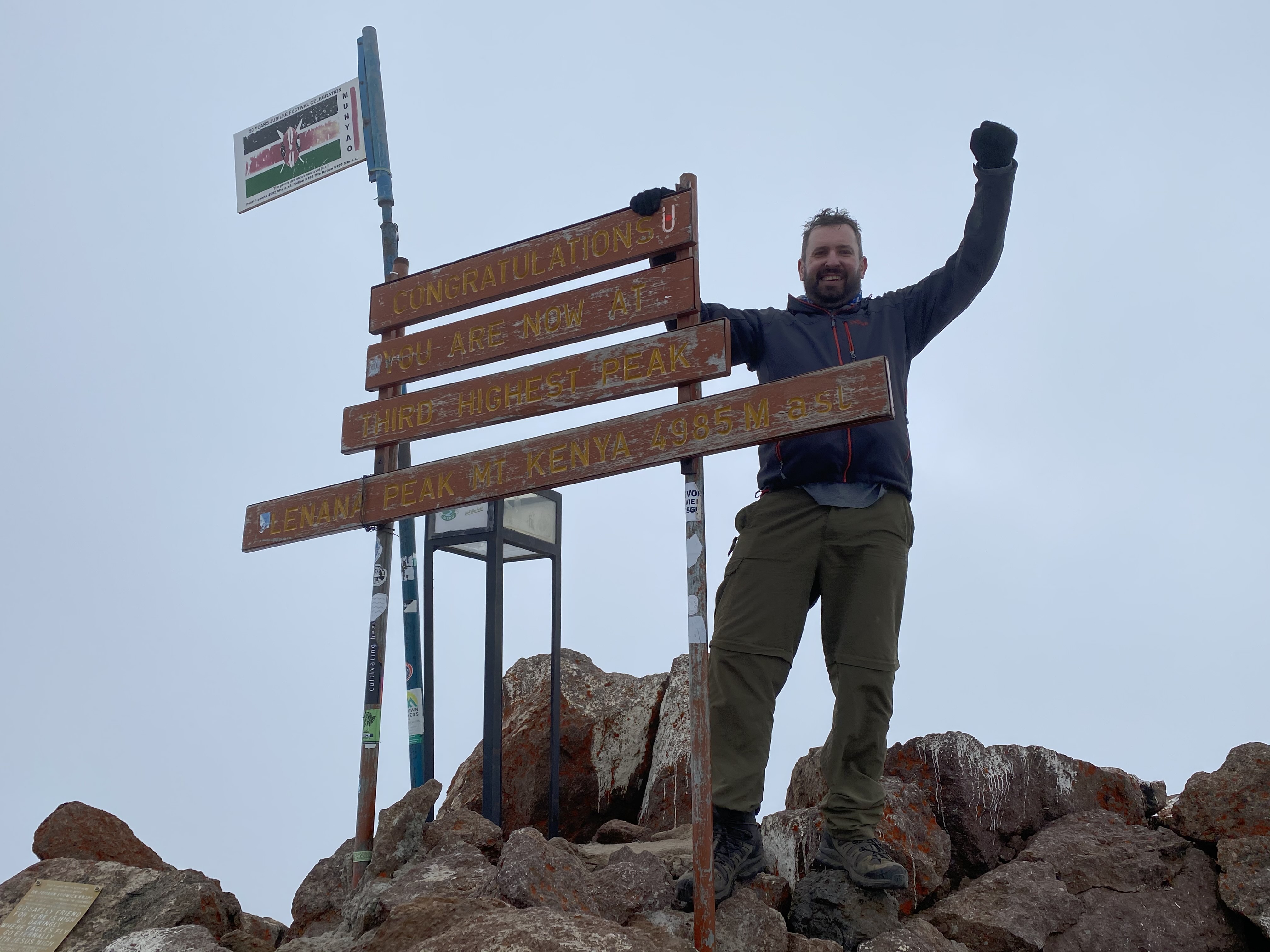 The next morning the rest of the team were up for the summit, altitude had finally hit me and a splitting headache (not to mention losing a tooth during the night by eating a well congealed sweet earlier that day) I decided not to go for a second summit, we headed down later that day to even more wonderful views, we could see the national park down below, and the iconic peaks off Mount Kenya behind us.

One final treat awaited us as our transport took us out the park, we saw more monkeys, a chameleon, Buffalo and a large horned deer (change to insert the name when I remember it or ask Rolf!) An evening to relax with a few beers, some of the team headed into town after dinner to a local nightclub which I’m told was quite an event, but exhausted, I went to my bed around 7.30 and slept for a solid 12 hours, our guide Ken taking a few of the group to church to experience something quite unique for the guys that were brave enough to be up and out at 6am the next morning!

The rest of the team arrived the following day, after most of us had enjoyed a relaxing massage to ease the sore legs, and we celebrated with our porters that evening, drinking out of their traditional cow horn with local home-made beer which didn’t actually taste too bad!  The following morning we headed back to Nairobi, stopping off at the equator on route, and we finished the trip with a group dinner at Carnivore, where I think every meat possible was offered to us, Pork, beef, chicken, rabbit, ostrich, testicles of some kind and alligator I wasn’t brave enough to try!  With full stomachs we headed back to the hotel before our early flight then next morning.

The people of Kenya were all incredibly friendly and humble, it was truly wonderful to meet our guides and porters, their big smiles and personalities will linger long in the memory.

Come and join on this stunning trekking expedition with 360 14 – 23 September 2020. Click here for trip info or contact the office, we’re here to help answer any questions you may have! 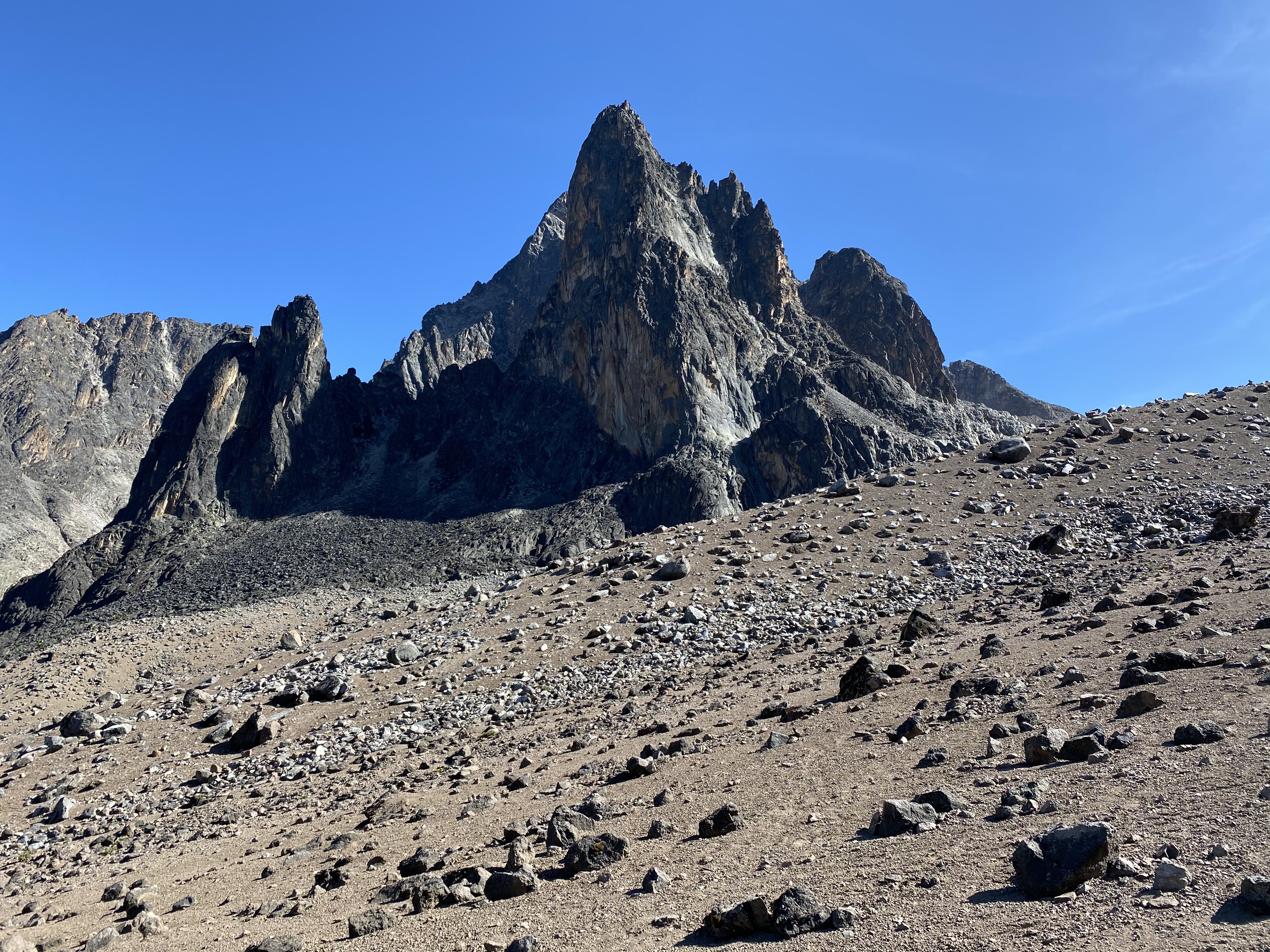