It’s been a year since our (Turner Twins) last expedition to the Greenland ice cap and the failure of that trip still holds strong. Although I’m excited there’s that thought in the back of my mind ‘what if we don’t make it’. How can I seriously carry on undertaking expeditions when I keep failing? This thought filled me with anxiety but also drove me to climb Mt Elbrus.

All the scientific testing had been conducted on us (with some rather intrusive testing and prodding) prior to departing with the 360 team from London.  We were being studied by King’s College London’s Department of Twin Research and GlaxoSmithKline’s Human Performance Lab, to better understand our physiological and psychological structure to help advance medical knowledge. We were also testing and comparing the clothing which mountaineers wore 100 years ago against today’s modern equivalent.

Lead by Rolfe we set out to complete the much harder North – South traverse. We’d have to take two flights over a 24hr period into the remote regions of Russia – the Caucasus Mountains. After arriving at the hotel and receiving a brief from Rolfe we set off on a long 5hr off road truck journey to Base Camp on the remote North side of Elbrus. It was an awakening experience (we literally couldn’t get to sleep because of the rough terrain) of huge vistas and steep sided terrain and valley walls which we subsequently discovered that our truck ran precariously along. It was heart in your mouth stuff but one which I look back on with laughs and actual enjoyment. 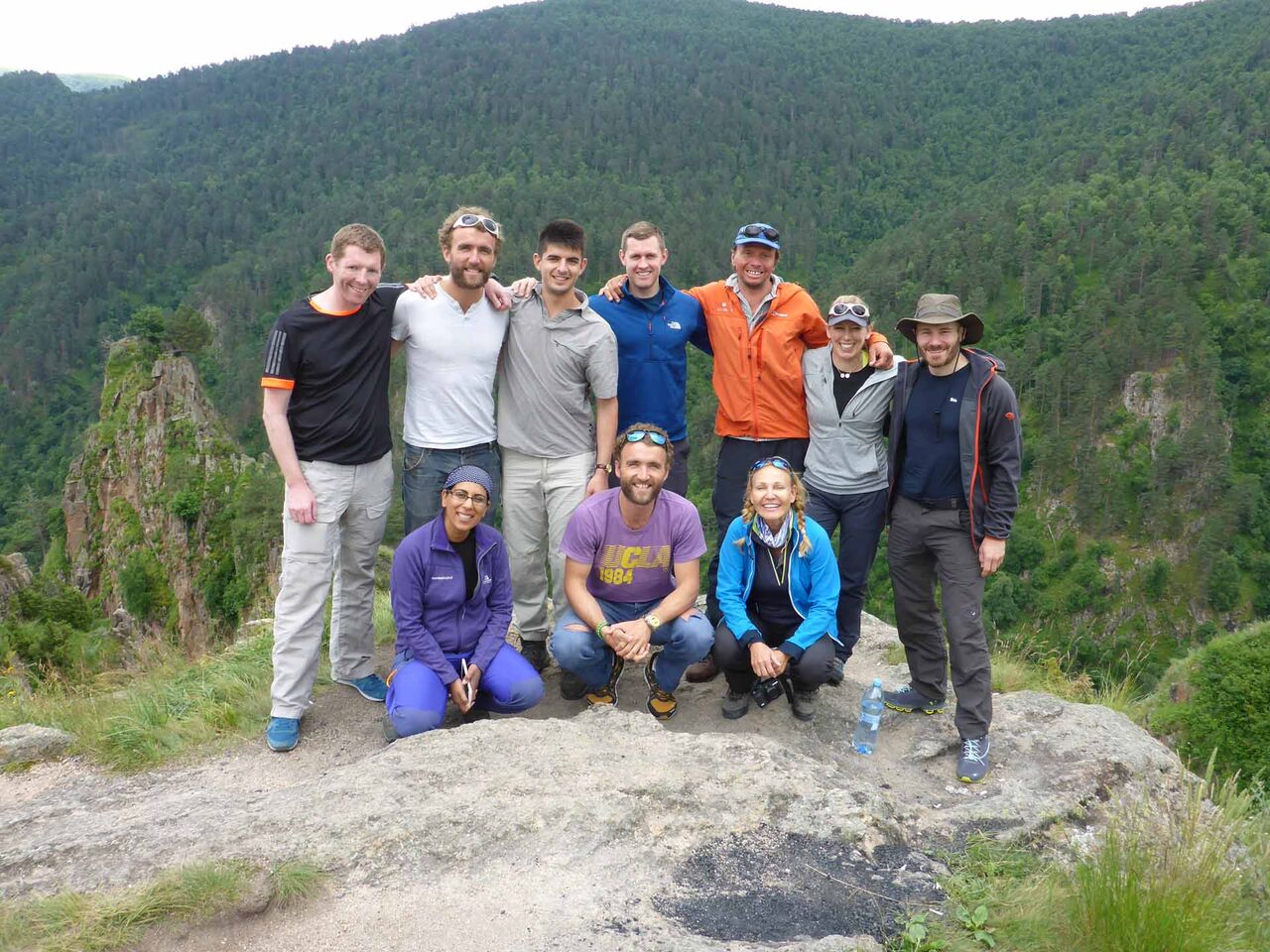 On arriving at Base Camp we sorted our kit out ready for our acclimatisation treks to High Camp the following day. We had regular scientific testing to do each day which started at Base Camp so we started organising all the tests and making sure we had everything at hand ready to get readings, samples or tests registered with the techy bits of kit provided to us. The rest of the team sorted out their own kit and tents ready for the expedition to begin.

Cloud obscured our view of Elbrus the first day but I shall never forget waking at 5am (sun shining) on the second day and laying my eyes on Elbrus – she was 10kms away but she look enormous and strangely familiar as I’d seen her so many times in pictures. After breakfast our acclimatization trek took us to 3,800m – not high but the highest I’d ever been so a few nerves still persisted. The trek offered every terrain imaginable – lush green pastures, moorland shrubbery, arid pastured, rocky lunar like rocky sections and snow. Our team really started bonding over the next few hours and indeed days and it created a really relaxed ‘get to know each other’ experience. We had a good mix of people – Ben, the youngest and most mature and funniest guy I’ve ever met (not), Jamie the more experienced climber (who loved a few vodkas!), Raz whose mental strength will always baffle me, Aggie and her love of a foot bath at High Camp and her love of Ben (not), Jo ‘The Bradders’ Bradshaw for her unofficial ‘guiding’, enthusiasm and her failed search for ‘Mr Russia’ (should have gone to Moscow!), Tom who actually knew why the local spring water was ‘fizzy’ and for actually managing to share a room with Ben (hats off to you) and Jon for providing endless deep and meaningful conversations and a good bottle of scotch. In summary, this trip would be a good one. 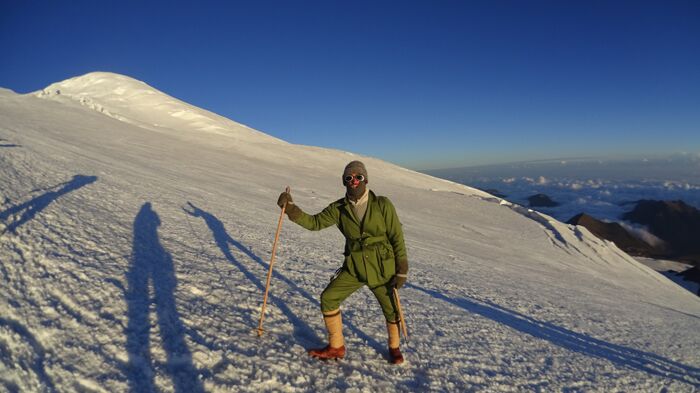 Once at High Camp we started our further acclimatization climbs, self-arresting techniques and some winter skills which would put us in good condition to tackle the west summit the following night. Games of S**t head were a regular appearance surrounding a meal along with the famous story time from Rolfe! The day before our summit attempt was particularly challenging as we had to sleep/ rest in the afternoon before our final climb which started at midnight that evening. My body was charged with adrenaline, anxiety and nerves so it was almost impossible to sleep. Ross and I stayed up chatting, admiring the views and playing cards until our ground crew told us to get some rest. 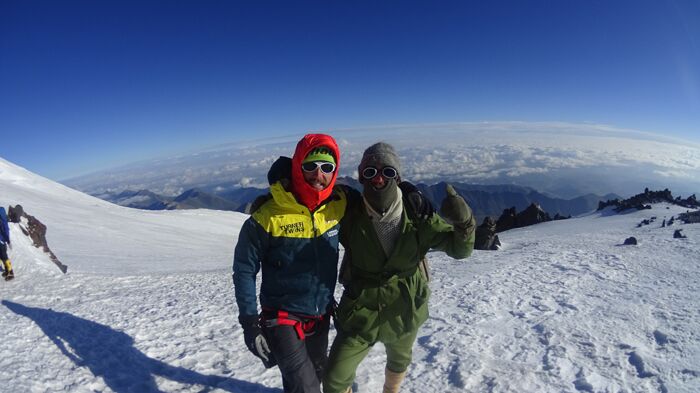 Midnight – let’s go. It was game time and the summit attempt was starting. It was a new experience for me and something I love about these expeditions – experiencing something which scares you (just enough) to become really exciting and learn about living outside your comfort zone. So many questions; what would it be like, how hard will it be, will there be any issues, will my knee flare up again? Ironically, in the pitch black of night at the start of our summit attempt, I found myself trying to avoid getting my feet wet (due to the leather boots) at the start of the glacier due to the melt water coming off the mountain. I laughed to myself as I didn’t think I’d be doing that. My traditional clothing had proved better than I’d ever imagined – it kept me cool when I was hot, and vice versa so I wasn’t concerned about it giving me issues further up the mountain which was a relief. Four hours later we were nearing Lenz rock at 4,800m and the wind started picking up. Time to put on some warm clothes. It was a wind which hit us head on and was howling and fierce but any worrying thoughts were suppressed by the ever rising sun. It gently but surely raised its head above the horizon to produce one of the most memorable sunrises of my life, as well as warming my face. 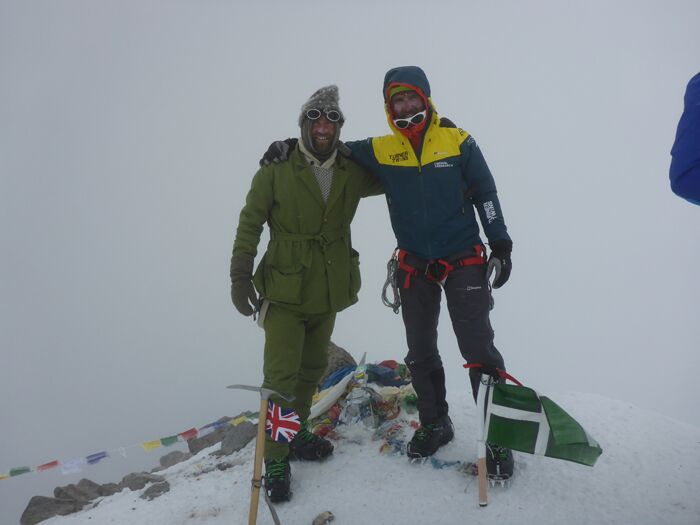 Up, up, up we went eventually crossing the saddle between the East and West peaks, until some 8 hrs later we found ourselves tackling the last ‘pitch’ to the summit. It was surprisingly hot, yet we still had this wind which we knew would only get stronger as the day went on. We were shattered, dehydrated and just wanted the pain (and climb) to end. It was a serious battle of the mind. As soon as we landed on the summit ridge the weather came in and we were in a white out, however it was all worth it as we stood on the summit of Mt Elbrus 5,642m (18,510ft) above Europe and finally bathed in success. It took 14 hrs to get to the summit, a tonne of comradery and team work, some laughs, tears and most of all a will to avoid failure. 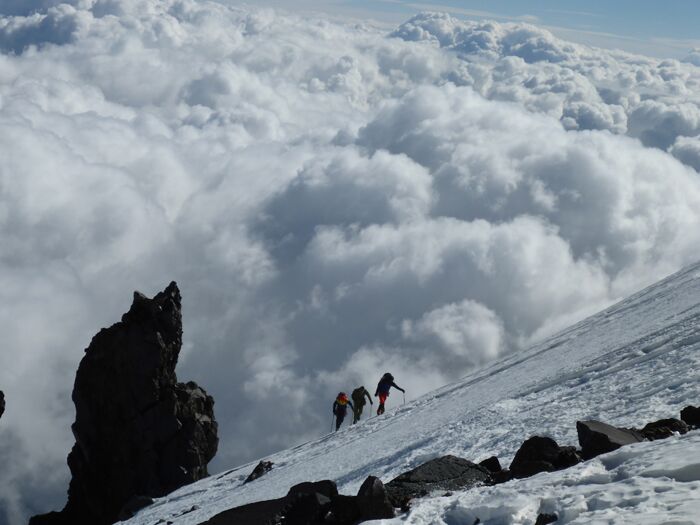 It’s an experience which will live with me for the rest of my life. Thanks to all for making what it was.