Antarctica. Five summits in a day…

The sun never sets during the austral summer of Antarctica.

Sure, as we climbed into the shade of the mountain it felt colder than the sunny side, but shade never constituted night, the stars never came out, there was no waxing or waning of the moon.

If we had left our watches at home, we would have experienced a never-ending day… 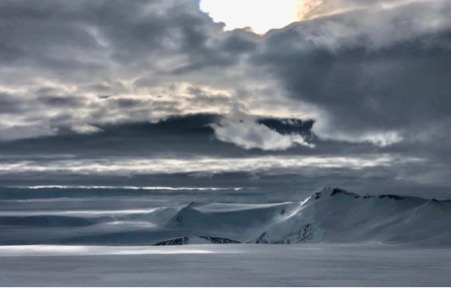 Life under Antarctica’s never-setting sun creates its own peculiar ways of being. We never got up until midday while at low camp, as the sun still hadn’t risen above the massive east face of Mount Vinson and it was simply too cold to get out of the sleeping bag. After breakfast, at 2pm, we’d clip into the kilometre-long fixed line and begin our ascent to the high camp, where we arrived at 10pm, just in time for lunch! It sounds bizarre, and it was; a climbing pattern the exact opposite of every other mountain I have been on.

High camp is on an exposed section of the ridge. Howling winds continuously batter it, but it can still be quite sunny and, at times, when the wind calms to a breeze, the tents warmed up enough for us to sleep on top of our sleeping bags instead of in them.

Being mostly pencilled in to guide Mount Vinson for the three month long season, I got to know the mountain and its quirky weather very well. When Larry, the Base Camp Manager, radioed the forecast up to us and said that there’d be winds rising to 18 knots on a proposed summit attempt, I would know exactly what that would feel like and whether or not the climbers in my charge that day were up to the task. Some were and some were not. 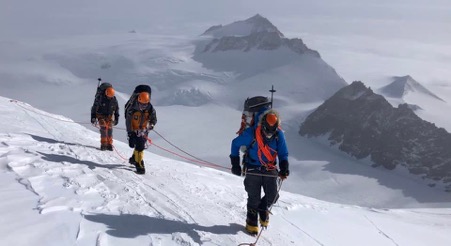 If my folk had been strong up to the high camp, were well rested, fed and hydrated, then we’d have a crack at the summit in those winds. If they had struggled the previous few days then we’d remain in the high camp and keep a vigilant eye on the summit ridge, waiting for the plumes of ice and lenticular clouds to dissipate before heading up.

Climbing Mount Vinson (4,892 metres) is all about having patience. My first team, a young Pakistani lady from Pakistan and a middle-aged American guy, were strong and we had no rest days between leaving the basecamp and reaching the summit in ideal conditions. Perfection on the roof of Antarctica is governed by the wind. The summit temperature never got above -20 degrees C whilst I was on the mountain, but this temperature (which has most of the world hunkering down in front of a fire and reaching for a glass of mulled wine!) is quite balmy on a windless day on Mount Vinson. We spent a full, incredible hour on the summit and even took our gloves off to work our cameras. Then, we descended in a day and waited (and waited!) for the winds to calm down at basecamp before the Twin Otter ski-planes arrived and took this team home. 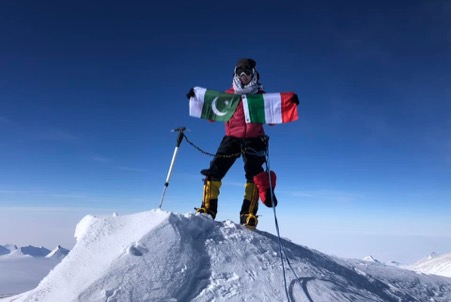 My next team of two American doctors were not quite as lucky. The weather was grim when they arrived at the high camp, and a 35 knot wind howled like a banshee outside our tents for 3 days, predicted to decrease to 15 knots for an eight-hour window, before rising again to hurricane force.  It was a ‘now or never’ moment. By continuously moving and taking only short breaks to eat a quick snack (tucked inside our down jackets to keep them from freezing) we managed to remain warm, and reached the summit in a very credible 6 hours from high camp. But, the combined windchill of 15 knot winds and -34 C ambient temperatures was ball-bustingly bitter. Our goggles froze solid, we were each covered by a sheet of rime-ice armour and sadly couldn’t take any summit photos as our cameras froze the second we took them out from our jackets.  We could linger no more than a minute. A fond memory, the only evidence of having reached this most precious of seven summits. 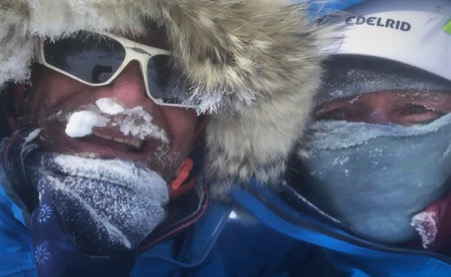 Tim, our team manager, asked me if I was up for guiding a speed ascent of Mount Vinson… My climber (a mountain runner from Italy) had set an incredibly fast time on Denali and had given Kilian Jornet a good run for his money on Mount Everest. Was I interested? Gulp!

As a warm up, we climbed from basecamp to the top of the fixed line in 6 1/2 hours. This would usually be a two-day mission for a team not taking a rest day at low camp: things were looking good. Then, after waiting out some bad weather, we began our summit bid from the basecamp of Mount Vinson. My Italian client travelling light. Me, not so much! We moved well together, set a cracking pace and ate up distance and altitude. But then came the wind and mountain conditions like I have never experienced before. The higher we climbed, the stronger the wind became. Soon, the 20-knot summit winds predicted by our weather service became 25-knot winds, then 30, then 35. When we hit the summit ridge the wind became a living entity; a malevolent, merciless and vicious monster. It roared and became painful as the combined windchill temperatures of 35-knot wind and -38 C ambient generated a vortex of other-worldly conditions.

(When, 2 months later, I returned to our base in Patagonia, I googled what we had experienced: -62 C, which came with this appropriate advice, “Outdoor conditions are hazardous. Exposed skin may freeze in less than two minutes. Stay indoors.”)

“Time to go down…?!” yelled my client, and the winds swept us down to high-camp in record time. A tent had been set up by my colleagues Sam and Seba, and we ducked inside and sat out the weather for a further 3 days before attempting to reach the summit again (successfully!).  The tent was well pegged down, tonnes of snow piled on its snow skirt. It had been tested in a wind-tunnel to withstand a hurricane, but still it wasn’t my safe warm bed back home. “Merry Christmas…” my Italian tent-buddy said from somewhere deep within his sleeping bag, as the tent bent down to slap my face… 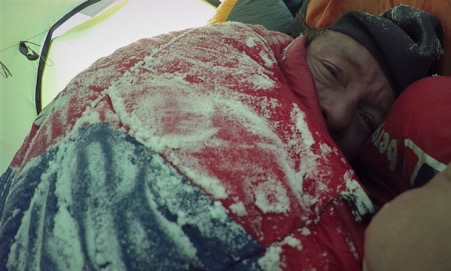 My last summit of the day was testimony to how incredibly varied the weather and mountain conditions on Mount Vinson can be in a singular season. Teaming up with my good friend Wes, from the USA, we guided a disabled British soldier (wounded in Afghanistan) and a renowned polar explorer (also British) to the summit of the bottom of the world. Like my first summit of the season, we opted out on rest days and swarmed to the top in three days of continuous climbing. Only a little wind stirred, the sun made our tents toasty warm and we enjoyed summit conditions that could (almost) have been Bahaman. It would have been easy to imagine that, as my long day on the ice came to an end, the mountain had finally decided to give me a well-deserved break.

After, the long wait at basecamp in thick pea-soup fog for the Twin Otters to land and take us home. Antarctica still ruled the roost. 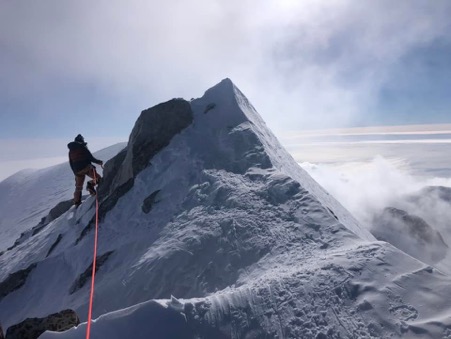 Want to join Rolfe and the awesome Antarctic Logistics & Expeditions team on Vinson next year?

More info here, or get in touch!