Lucky competition winner Tom Napper is off to Everest Base Camp with us this weekend. We chatted with Tom to hear how his training has gone, check out his mega artwork and what he is looking forward to most on his adventure!

360: Hey Tom! We’re excited for you to experience Nepal. How’s the training going?

Tom: Hahaha training? You must have me confused with someone else! I’ve been finding it really tricky because I’m house-sitting in Oxfordshire this Summer and the biggest hill I can find is only 186m! I recently had two years of stomping up and down mountains in New Zealand though so I’m hoping muscle memory will see me through!

360: We have no doubt your experiences will put you in good stead. What are you most looking forward to?

Tom: My happy place is watercolour painting my adventures and I’m hoping to make a name for myself as an Expedition Artist. This trek is such an incredible opportunity to get my creative teeth stuck into the Himalayas! 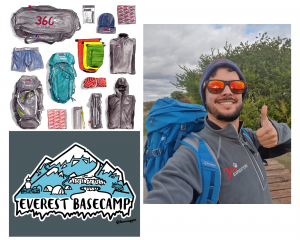 Tom has very kindly showcased his artwork with us, including this watercolour piece he has created of his EBC kit.

360: When you won the competition you were able to choose between Kilimanjaro and Everest Base camp. A tough call, indeed! What made you choose EBC?

Tom: Having to choose between two things that are a trip of a lifetime is totally bonkers! I eventually went with EBC because I’ve been to Tanzania on a previous bike tour and I’ve wanted to visit Nepal for about a decade.

360: Then it is about time we got you there! Let’s talk expedition snacks – what treats will you be taking along with you?

Tom: A heap of chocolate and jelly babies. Although I also want to keep my pack light! It’s a tricky predicament.

360: What’s the best bit of advice anyone’s given you in preparation for the trek?

Tom: I’m terrified of heights, and I’ve paid extra to do the Island Peak extension. I was told “Look at it this way. If you die, at least you’ll be roped together so you won’t be alone!” which I loved! I was also recommended to arrive a day early to help with the acclimatisation and jet lag. Hopefully that will pay off.

360: Any thoughts on what you’ll be spending your Cotswold Outdoors / Snow & Rock voucher on?

Tom: Last weekend I went bananas in Cotswold Outdoors and came out with £360 of kit for £2.45! I’ve treated myself to a Patagonia Nano-light Hoody, because I’d never normally get to spend that kind of money on a jacket. Lots of dry bags. Tech wash. Fancy hiking undies. And a small fold-up chair to make painting a bit comfier.

360: You are also armed with a PowerTraveller power bank, what is the best reason for having that in your kit?

Tom: I suspect I’ll be taking a million photos, so having a power bank that has enough juice for both my camera and phone for multiple days is super useful. I’ll probably rig it up to a solar panel when I’m next buying toys!

Wishing you all the luck and happiness on your upcoming trip, Tom! No doubt you’ll fall in love with Nepal as many do!