Welcome to my post climb update, with all it´s trials and tribulations as usual!!!

I have been back since Sunday and this is the first chance I have had to do this. Let´s start with a bit of background to this one. 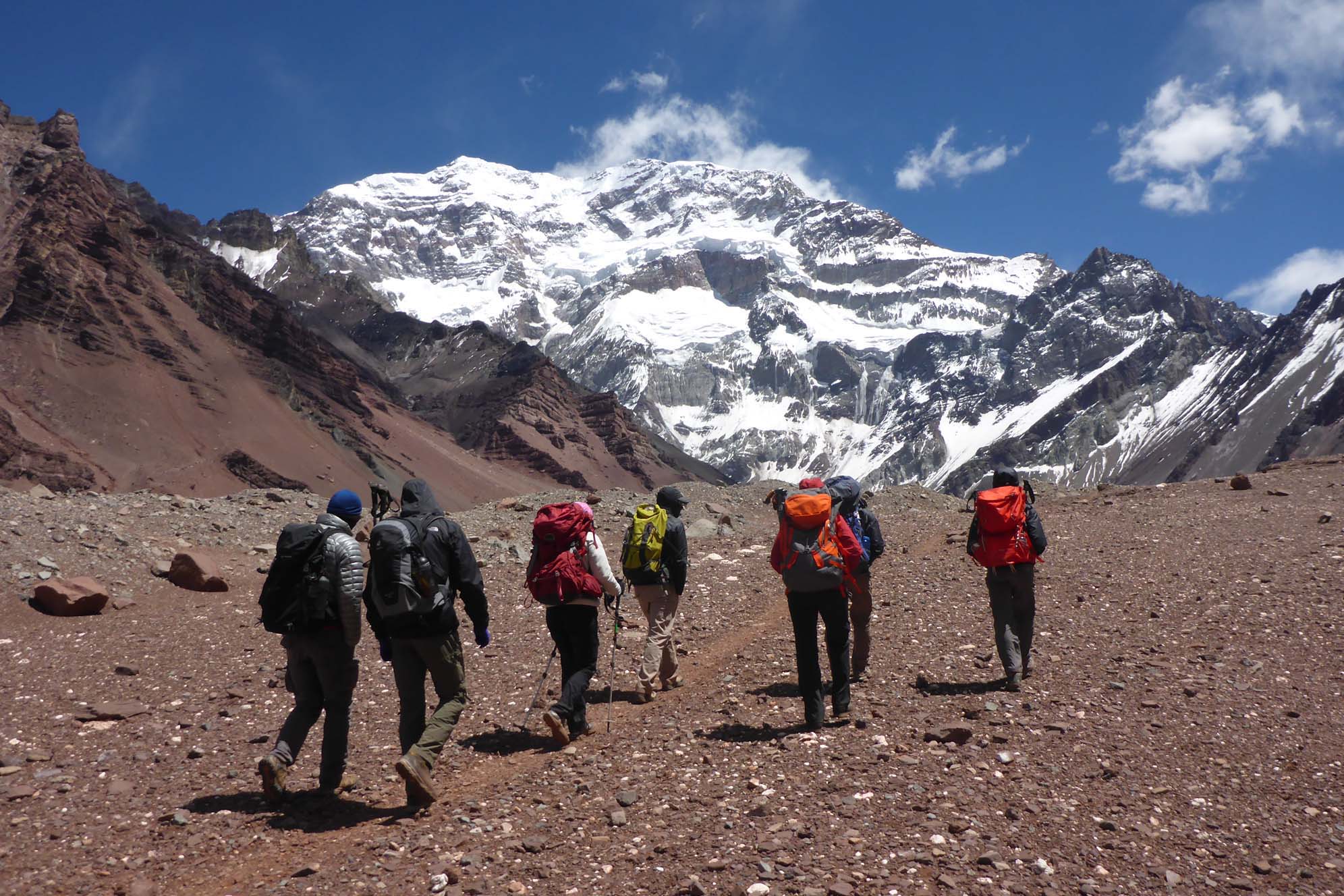 Aconcagua,the highest mountain outside the Himalayas was NEVER on my radar as its a very hard climb way above my pay grade HOWEVER, I returned home one day, opened my Trek and Mountain magazine subscription and there it was, a special deal in conjunction with 360Expeditions, I looked at the dates and thought “blimey” that would work….before I knew it, i was booked on.

So, my usual suspects fall into place, being dodgy legs and knackered feet so I completely changed my training regime to try to combat these factors. Enter “Crossfit” – my new best thing since sliced bread, so then fast forward to Jan 2015 and see me enter Argentina with the Team:

Shelagh – my tent buddy from Scotland

Stella – the climbing machine from Sweden (or Greece – take your pick!)

Chris – only THE Editor of Trek and Mountain magazine – no less

Evan – whipper-snapper Ultra runner from Wales AND only 19 years old!!!

Lee – returner to Aco after being blown off the mountain in 2012.

and then our Main Guide Rolfe Oostra of 360 Exped – its a beautiful thing!!

So after a 13 hour flight with NO entertainment, and a five hour wait in Santiago we arrive in steamy Mendoza. Problem one, 2 of the team´s bags did not arrive – so glad it wasnt mine (selfish or what).

This is pretty much how it went:

So, as a lot of you already know, I had a very short summit day and after 1 hour 38 minutes (yes 38 minutes) I flopped on the floor, poles thrown somewhere nearby, and said to Gerry (my guide) sooooo how much longer to the top – he said 6 hours, he then looked at me and said “or more…..”! Now, at that point I gave up (at White Rocks at approx 6150m I think). If I had my time again I would be having a serious chat with myself and saying – why did you give up? You didn’t even try? You threw in the towel. To say I am mad with myself is an understatement. I had suffered a panic attack inside the 5 layers of clothing, 2 hats, 2 buffs, down hood and goggles (I wonder why!). I was so damn hot AND I thought I couldn’t breath – which is simply poppy-cock and (as Rolfe would say) I was sweating the small stuff. Oh how I wish I had switched the panic button off and enjoyed my time instead. Another lesson learned BUT I am fed up of “learning my lesson” I want a bloody summit success – at this rate I’ll be the first UK women to successfully start and not make every 7 summit!!!

Now, as you also know, my trips never go without some sort of drama but the good news is that I had no Glacier or crevasse falls this time but we had our fair share of events as a group. First off, High Blood Pressure seemed to affect alot of the group – seriously – what do they expect to happen when everyone is sooooo excited!!! Dr Phil – our High Altitude junky doctor started the ball rolling by sparking a dramatic Med-Vac from base Camp after telling the doctor he felt like s**t for days (d’oh!) but had failed to aclimatise and was suffering from a dodgy ticker too (maybe) – exit stage left Phil – our very own FUD (not telling!). Editor Chris had an unfortunate injury – on top of not getting his suitcase/duffel and having to hire “less than up to date” kit in Mendoza – ironic as he probably had the best “on test” kit of all of us and ending up looking more like Mallory…. The unfortunate injury resulted in him being able to place his hands on his person with no questions asked when ordinarily he’d be arrested…. 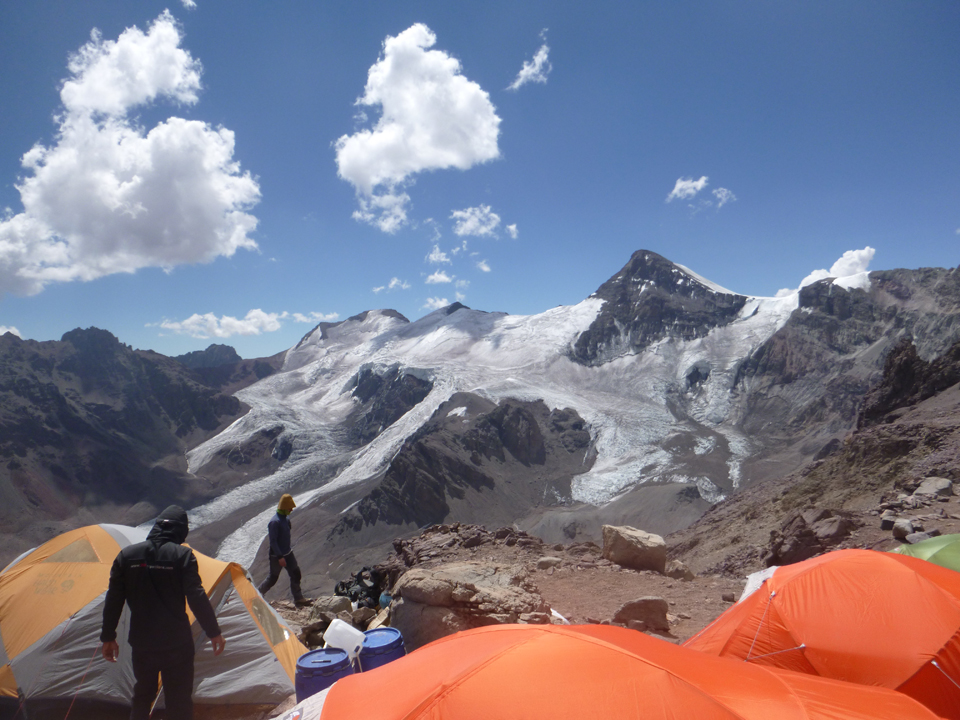 The most sobering moments had to be seeing Camp 3 in the cold light of day on summit day – from a busy buzzing camp to a devastated, flattened camp after the winds blew the entire camp away. The teams involved got pulled from their summit attempts early as they would have to desend down the mountain earlier than planned as they had no tents or kit left – poor buggers! On the plus side, we had been instructed “if you think you’ve put enough rocks on your tent – think again and put double the amount you think you need” – thank goodness – we were the only team not to lose our tents.

After all said and done, I had an amazing time and I laughed like i’ve never laughed before. Shelagh and I had a great time. We went from being shown how to put a tent up for the first time “ever” in Confluencia, to being tent queens. You’d be surprised how funny the instructions inside a tent are btw – private joke…

I also cant praise 360 Expeditions enough as the trip was super orgainised and they laid the ground work for having no excuses to summit (oops!) by doing so much for us and even still giving us home cooked food even at Camp 3 – amazing.

Currently I have very few photos because I left my camera charger behind – nightmare – I am attaching a pic of Camp 1 which has an awesome view and I will get some photos from Chris when he has uploaded his 5000 pictures. I am sure there are a hundred other stories I’d could tell you – and I will probably not shut up about this for a long time – sorry in advance.

But… until the next time…