It was clear to see the eagerness on the faces of the 18 Tesco staff as they entered into the cool morning air of Kenya out of the airport. A hassle free bag collection and with everybody accounted for we got straight on the bus for a 15 minute journey to our hotel. Or at least that was the plan, however Nairobi’s morning city traffic had something to say about that and morphed our journey time into almost 2 hours! An achievement that would pale to insignificance on the return to the airport at the end of the trip with a truly epic 7 hours!!! Nairobi, as one of the fastest growing cities in the world suffers the same fate with its roads as any rapidly developing city. Tough once at the hotel peace, serenity and relaxation was the order of the day, being quite a way out of the city, we enjoyed a buffet lunch in the gardens surrounded by trees and wildlife. Briefings on kit, equipment and Q and A’s were to follow, though an unexpected football match, an onsite bar and a desire for all to enter the holiday mood presented a little competition to getting this completed! 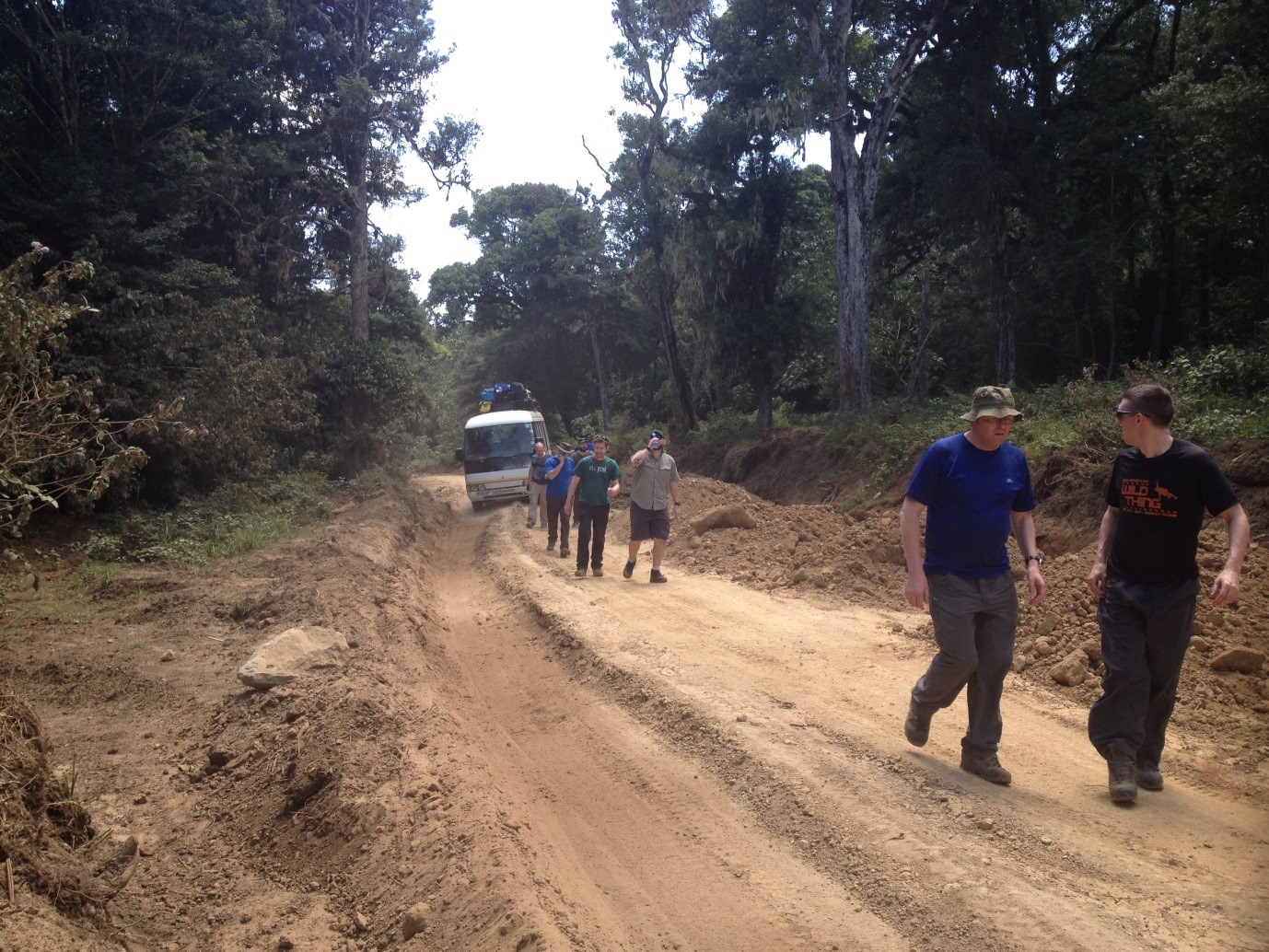 The next day all were showered and the adventures begun almost immediately with the bus finding it very difficult to make it up the “new” mountain road. Several times we had to get off the bus and walk sections, with the clutch smell and sometimes near constant scraping from the bottoming out of the bus on large ruts and dips in the road. An interesting start to an expedition and all handled it really well understating that Africa is very different to the uk, it was clear from the outset that people were ready for whatever this expedition could throw at them with a smile and go with the flow approach – absolutely the best way to be. Once at the star point and having walked past several other vehicles that Mt Kenya had broken we were met by a lunch of chicken and chips while being able to see for the first time what the landscape would be like made the effort worthwhile. Once fed and watered we set off walking through an area when elephants roam free towards a beautiful camp site by a lake which would provide us with an evening meal of fish. Heavy rain set in this day so all were happy to get to camp and settle in for the first night.  After plans, trains and automobile’s it was good to be on the mountain properly. 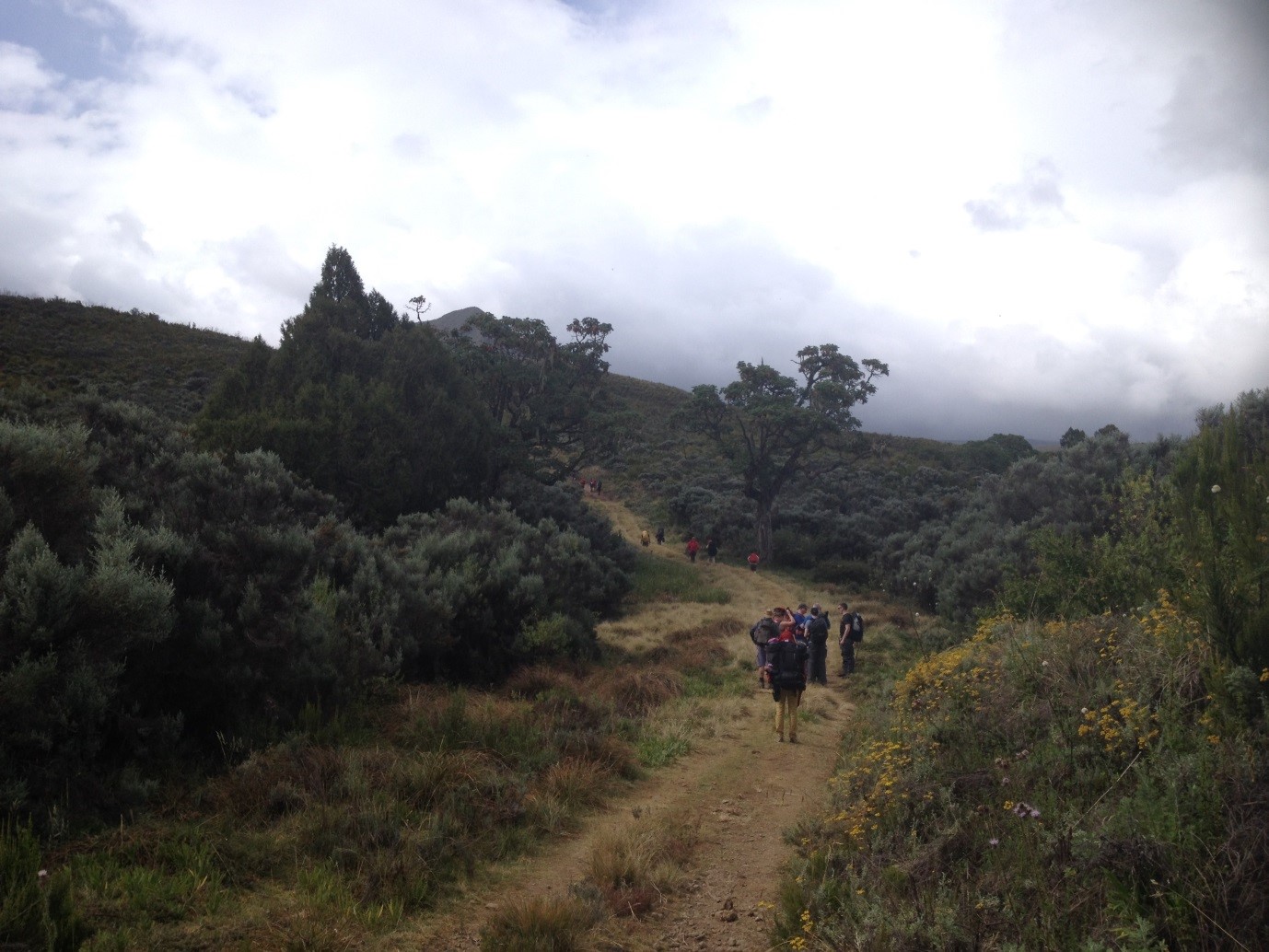 The next few days were spent trekking higher and higher into altitude and the unknown for many of the group, most of whom had never been this high. A routine of getting water, timings, sleeping and general life on the mountain was quickly established allowing all to adapt as quickly as possible to the challenges of this mountain in preparation of what lay ahead – summit night! A full days walking was completed with an overnight in tents in some incredibly idyllic campsites, over looked by snow capped mountains and jagged peaks, usually with a lake nearby just for good measure! As we trekked throughout the days getting higher and higher the transformation in the landscape was dramatic. Going from the hot, yet surprisingly green farming landscape of the lower levels of Mt Kenya to the far more jagged, barren and rocky mountainous terrain, with accompanying cold weather. 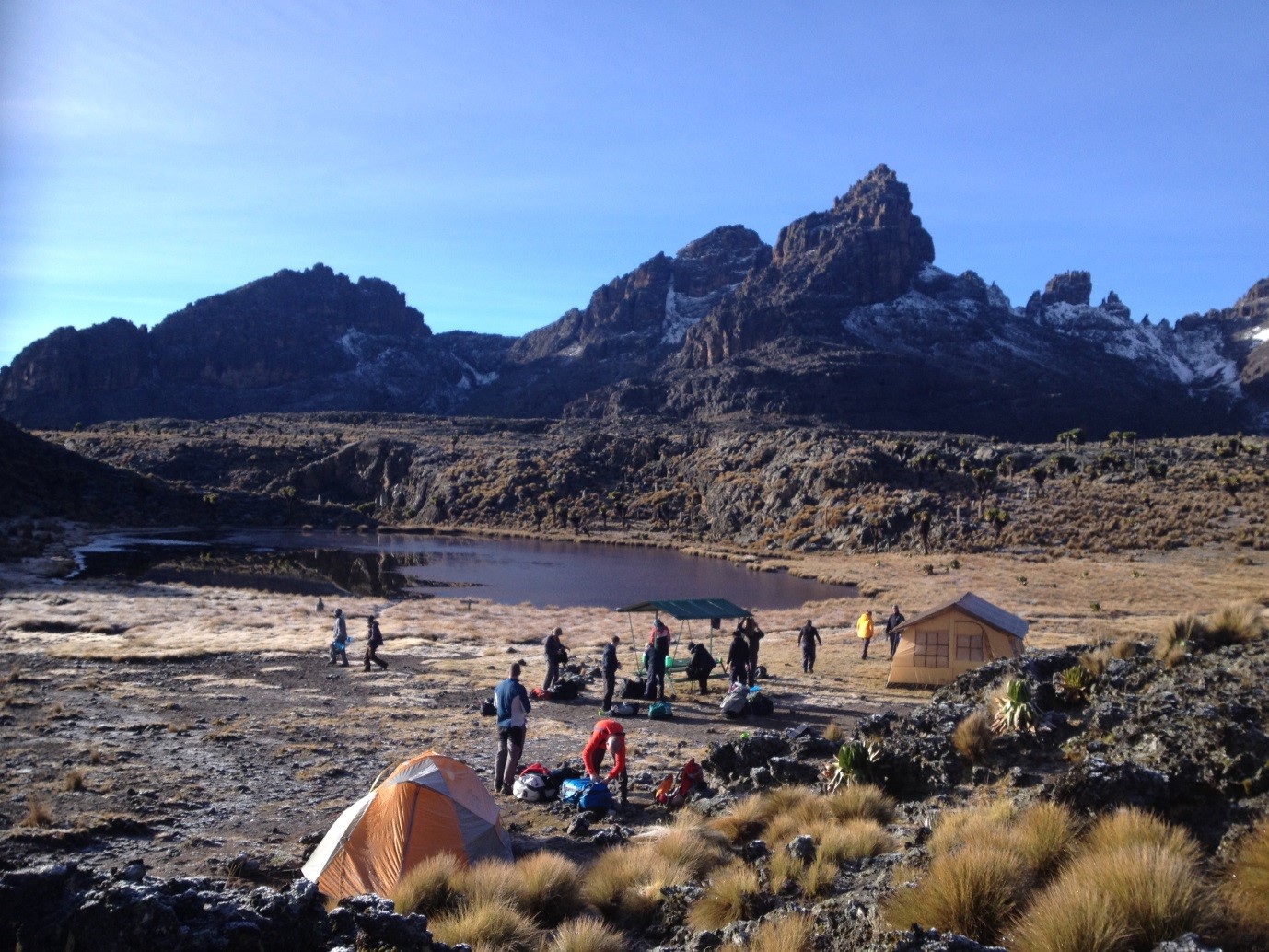 For most of our time we were practically the only ones on the mountain seeing only a few other people along the way made it feel like we had the whole mountain to ourselves. The modern life of the city was a world away from this – as was the relative human traffic jams you usually get on kili. A bit of sickness started to creep in due to the fast height gain but a sensible approach by all ensured we would all making the Austrian hut – the location for our summit attempt. Scenic, almost haughtily beautiful and serene landscape was uncovered on the way to the Austrain Hut. Trying to describe it is difficult; I guess it’s something that has to be experienced for one’s self to truly appreciate. Soup, rice, potato stew, mixed veg. A brief on our summit attempt in the mess tent was given after food, lit by headlights, and then all were straight to bed by 8pm as it was going to be an early start. 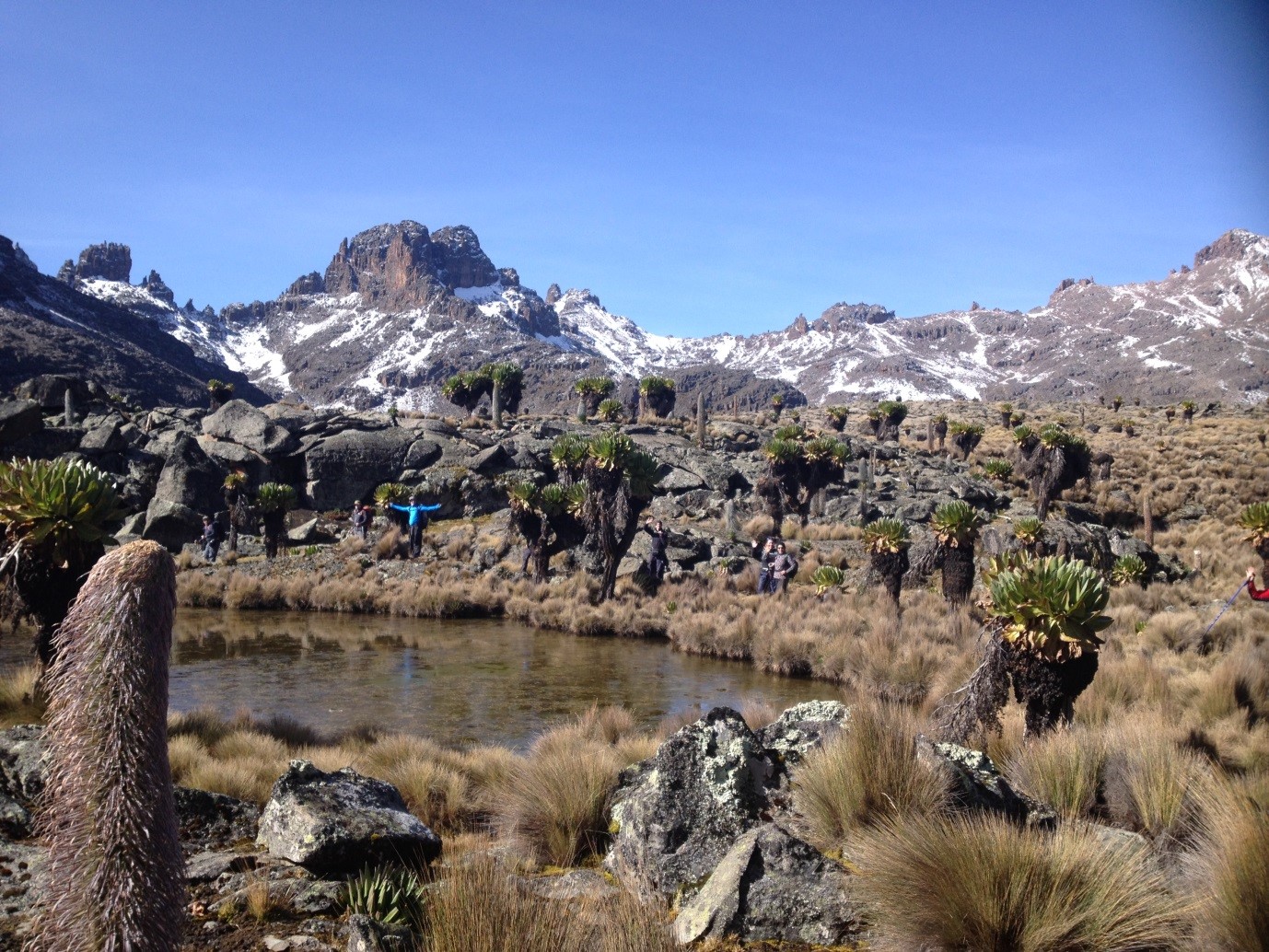 Here it was – summit night! It was decided to have 3 separate start times for the group based on their speed over the past few days. Having spent much of their time raising money and investing over a year of their time, all wanted to not only reach the top but celebrate that achievement together in recognition of the charities they support. We would set out around 4am with 20 minutes between each group with the fastest going first with the plan that everybody would get to the top for sunrise. An unexpectedly cold night, along with the nerves, emotions and anticipation of a summit meant that some people didn’t get much rest. 4 am came and it was time for action, first group, second group, then third group all leaving camp within 20 mins of each other. 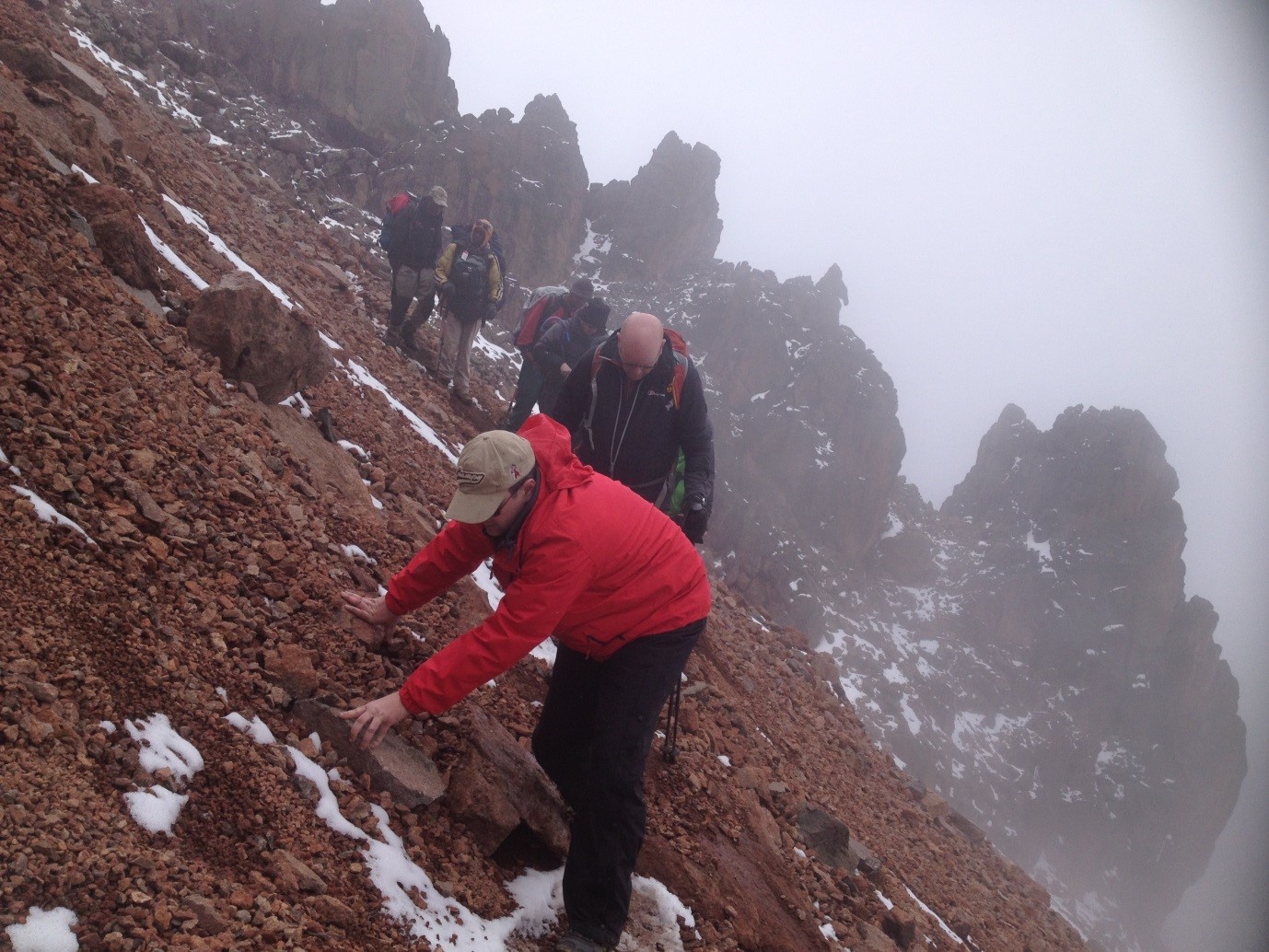 The whole way through we have had the mountain almost to ourselves and summit night was no different. With a full moon, clear sky and stars being the only company, Mt Kenya was providing us with that now incredibly rare sensation of being truly out in the wilderness away from all the hustle and bustle of the masses. With a summit night of only 200 meters and a determined team we walked, scrambled and climbed using the support wire attached to the rocks. A technical summit for any walker to be sure and a route that wouldn’t be out of place being described as an exciting basic scramble in a north wales guide book…just with African weather! As the rising sun lit up and warmed the mountain, the group had worked hard, work and helping each other along the way. Their efforts were not in vain, in an instant all the effort had paid off with 100% of the team reaching the top!!! 360 degree views, group pics, some soul searching and taking in our achievements….Well done Team Tesco!!!