Every little wrinkle on the man’s face tells a story

Every little wrinkle on the man’s face tells a story. Every shy smile that escapes holds back several life-times worth of experience. This is Bhola my friend and partner of many adventures.  What he will never reveal is how he thinks. How he really feels about the world as one dramatic event after another tumble like dominos in his wake will always be conjecture.

Right now he is at the Base Camp of Mount Everest; where I am heading with a group of trekkers. He has been there for a week already getting the camp sorted for the many clients that have signed up with him to attempt to climb the highest mountain on planet Earth. I will be climbing with my own single client but I will make it a point to hook up with him for a sneaky Chang when I get there. 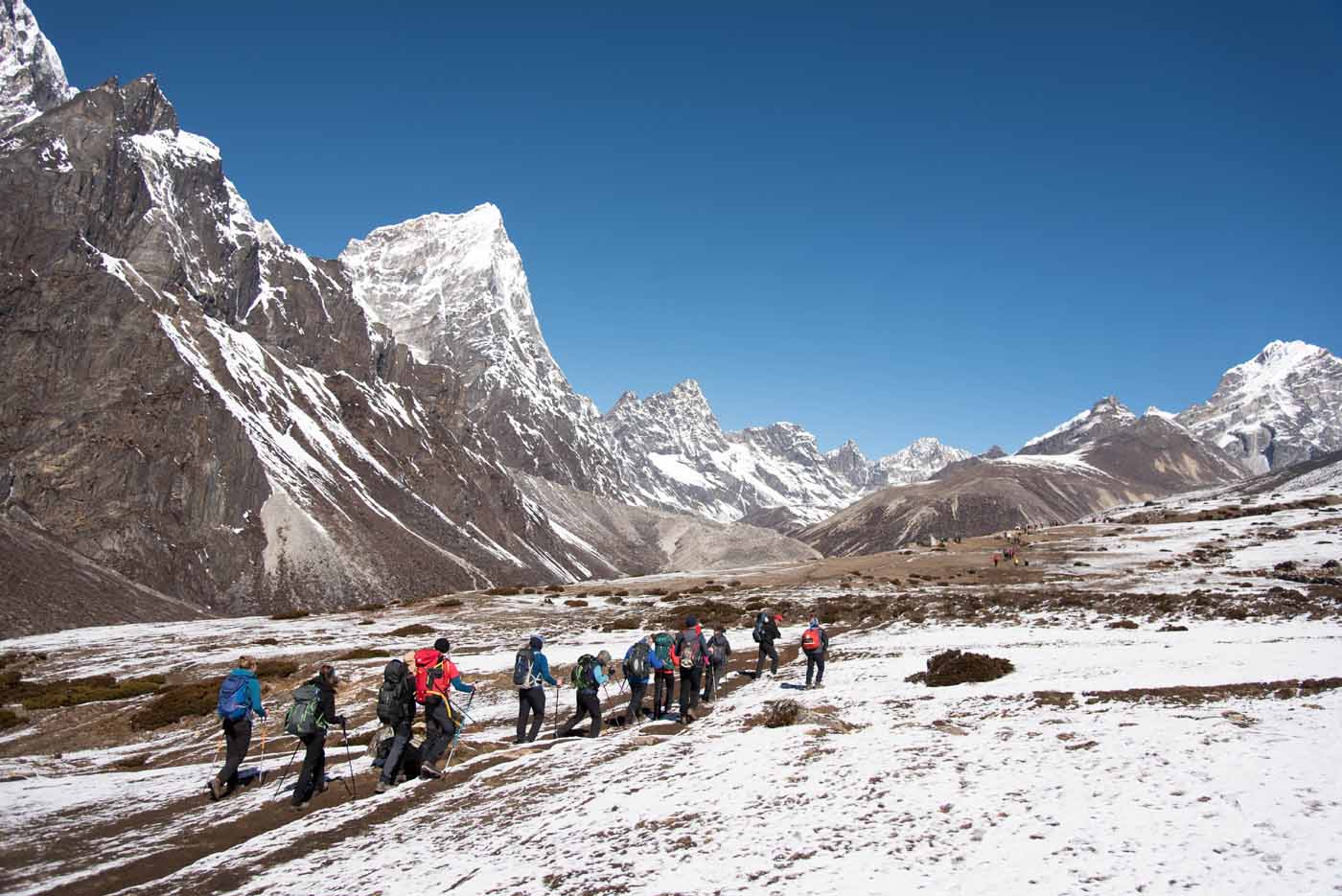 For now it is the job to trek to Base Camp. Like a great man once said a trekking group is only as good as the people who are in it. And from this point of view I couldn’t have been more lucky; every single team member was a either a good friend, a previous trekking partner or a hot babe! Win win all round and all an absolute pleasure to be with and introduce to the magnificent Khumbu valley; the showcase of some of the most jaw-dropping scenery on earth. 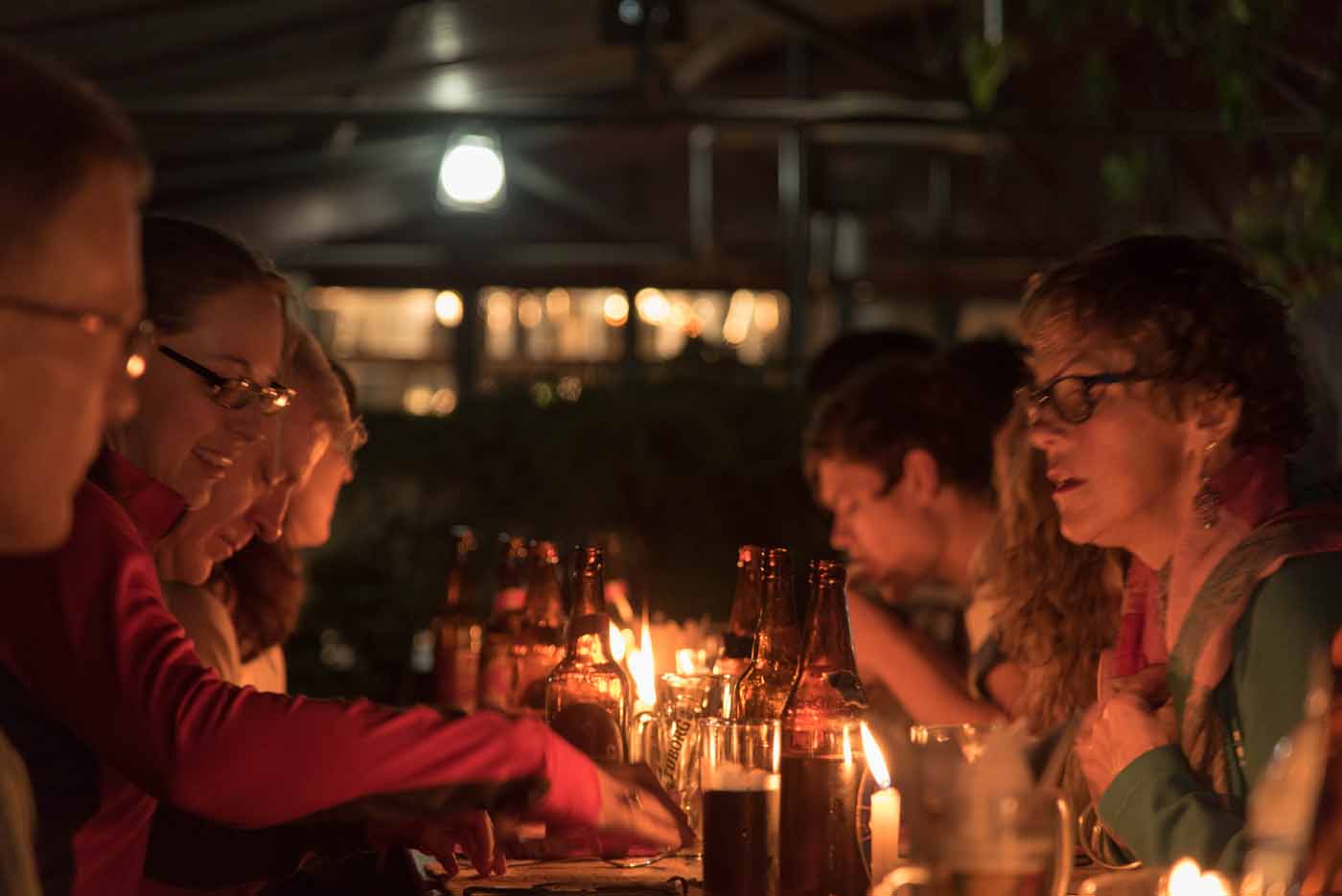 A lot of people have mentioned that mountains feature a lot in my blogs, stories and images but no apologies are made for this. It is who I am and these amazing natural features have totally overwhelmed my existence. I climb therefore it has been ingrained into me since my first fling with the vertical. But scenery aside, venturing into the Khumbu is much more than just striking topography. It’s the people and their enduring culture that have an equal impact on trekkers stepping into this amazing valley. The Sherpa are an ethnic group whose origin lies in Tibet. They settled in the Khumbu region many centuries ago and are the power behind every expedition that attempts Mount Everest. Their life-styles although enhanced by modern benefits, are largely unchanged and travelling through the Khumbu Valley one gets a sense of how life used to be hundreds of years ago before Westerners cluttered it with their bags of unessential essentials. 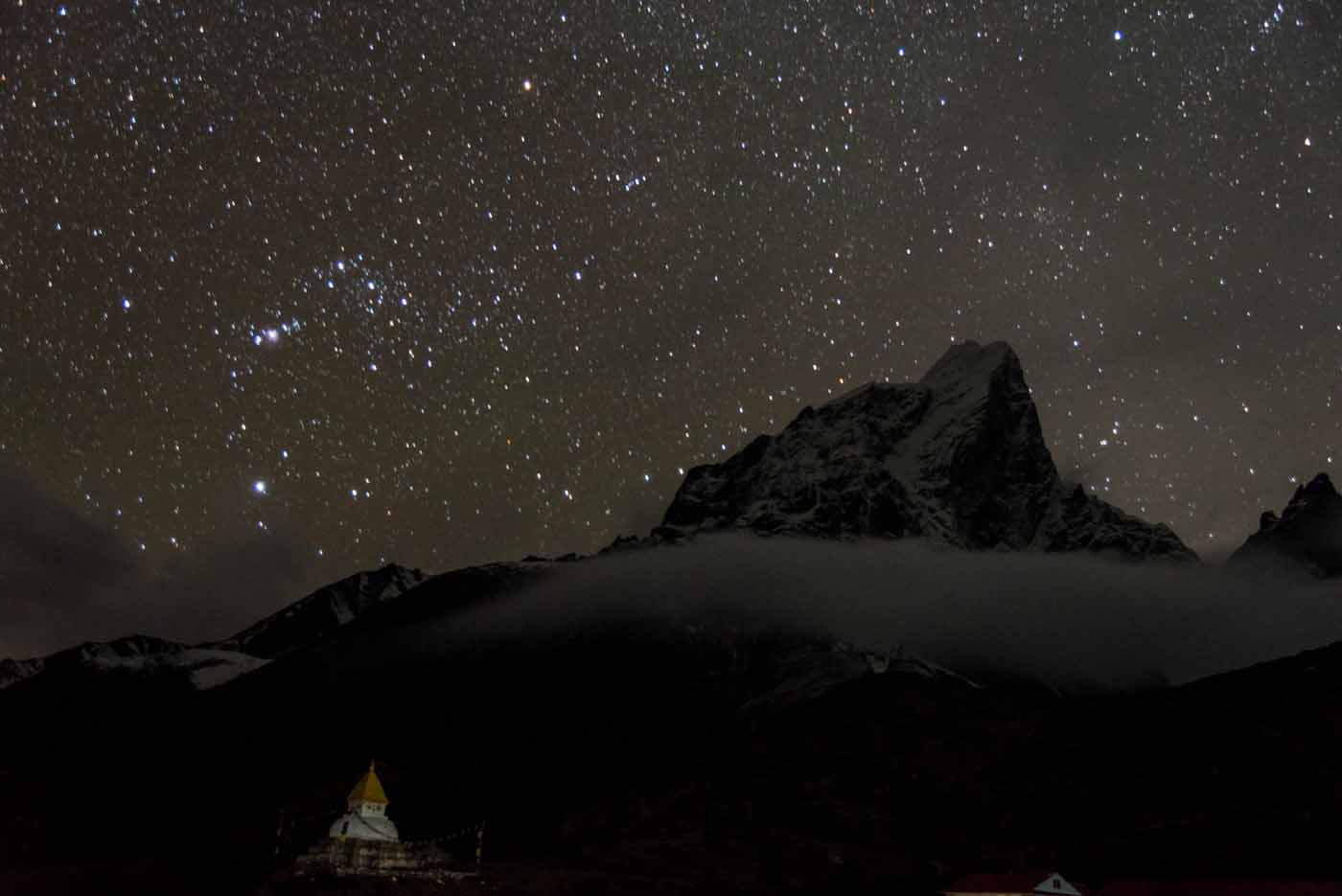 Stepping into your first Sherpa tea-house at the end of a day’s trek is an experience in itself; at first Sherpa hospitality made sure that no-one was left out in the cold; strangers, late arrivals and passing porters caught by nightfall could spend the night in these family homes and escape the elements outside by the heat of the yak-shit fired pot belly stove. The focus has shifted to Western trekkers but the hospitality remains. Every night each tea-house in every village becomes a hive of activity; Trekkers gather around tables for the welcome cup of tea, and the Sherpa crew get busy unloading Yaks, sorting out bags and run to help in the kitchen. Cast your eyes over the menu and Mo-Mo’s, Chilli Yak-steak and Dhal Bhat feature large as potential fare to keep hunger at bay and a simple bed is covered in a warm thick quilt  ready for you to dive into. What these people do for an expedition is nothing short of legendary and it was only natural for my trekking team to warm to them and form everlasting friendships. 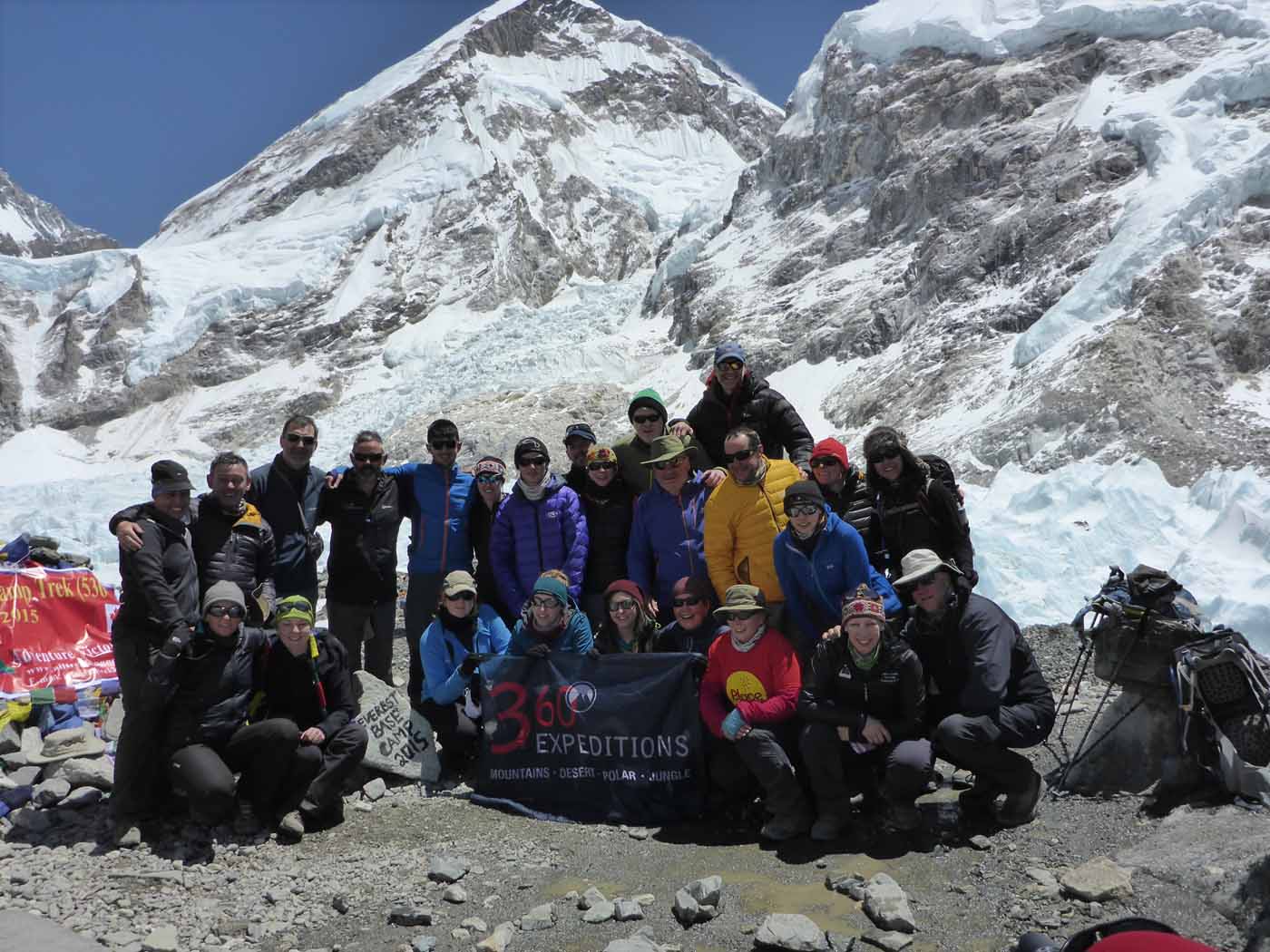 Eventually the trail reaches the Base Camp of Mount Everest; a boulder covered in prayer flags and Buddhist incantations marks the official entry. From here you look out on the hundreds of colourful tents which will be the home for nearly 2 months to the many climbers whose sights are set at the lofty summit beyond. Surrounding you are incredibly impressive peaks whose own characteristics remind you of fairy tale giants; some are menacing and some seem gentle. As an added extra I take the group into the Khumbu Icefall and everyone is enchanted by the surreal colours bouncing of the soaring ice-towers and the gnarly almost gothic ice-formations that high altitude elements have created. It is at this point that I know that the experience has reached its pinnacle and Nepal will not be forgotten in a hurry. 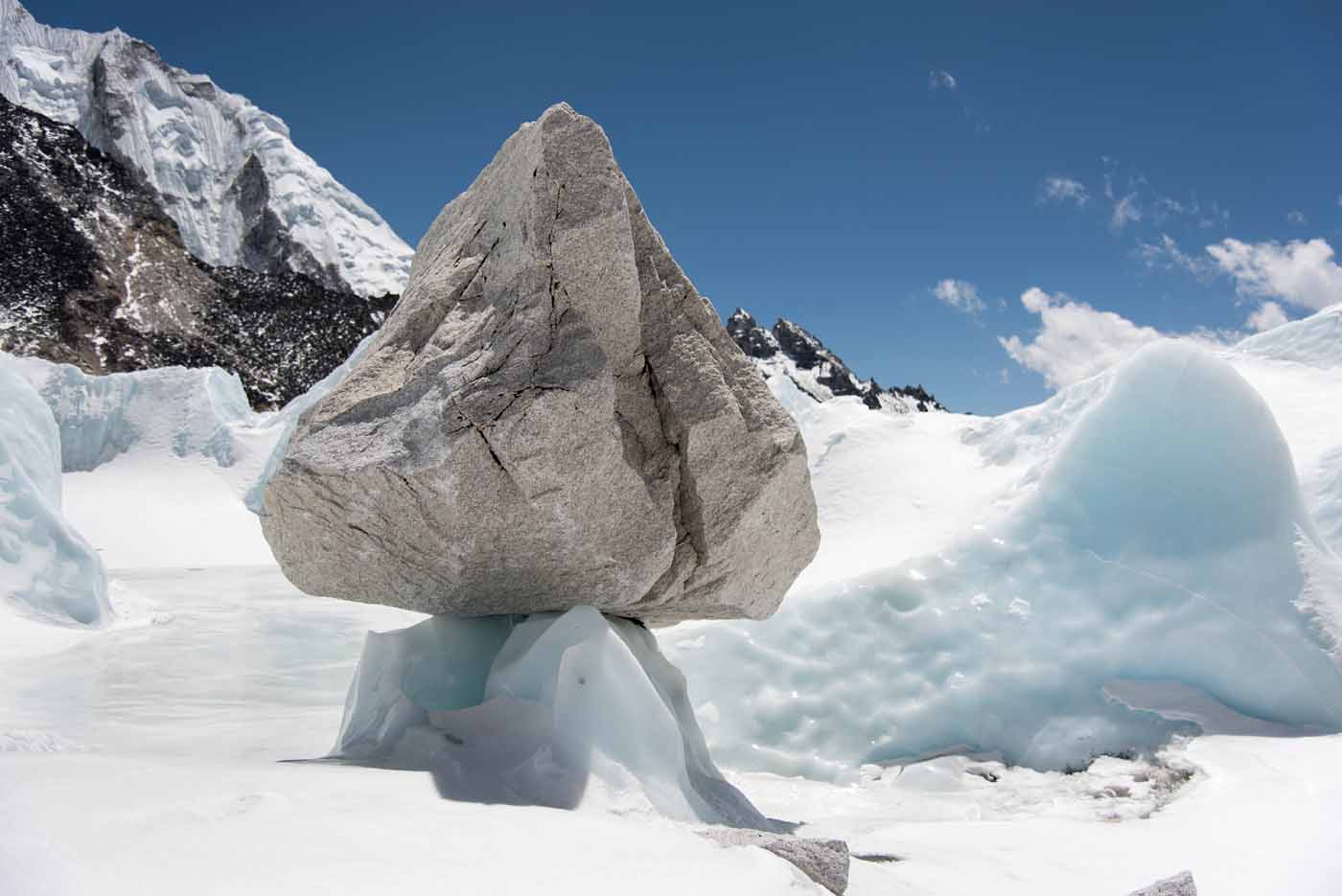 The impact of the combined elements of scenery, people and culture have on the fortunate trekking here is nothing short of life enhancing. An old brochure once said something along the lines of “Nepal, visit once and you’re sure to return” those words hold true, at least for me; like a pilgrim to a shrine needing yet another top-up of  Sherpa goodness and fill of adventure I have returned here every year for more than a decade. Despite the clutching at cliché Nepal is a magical place and every single one of my trekking groups is either still in touch with my Sherpa crew or is making plans to return. 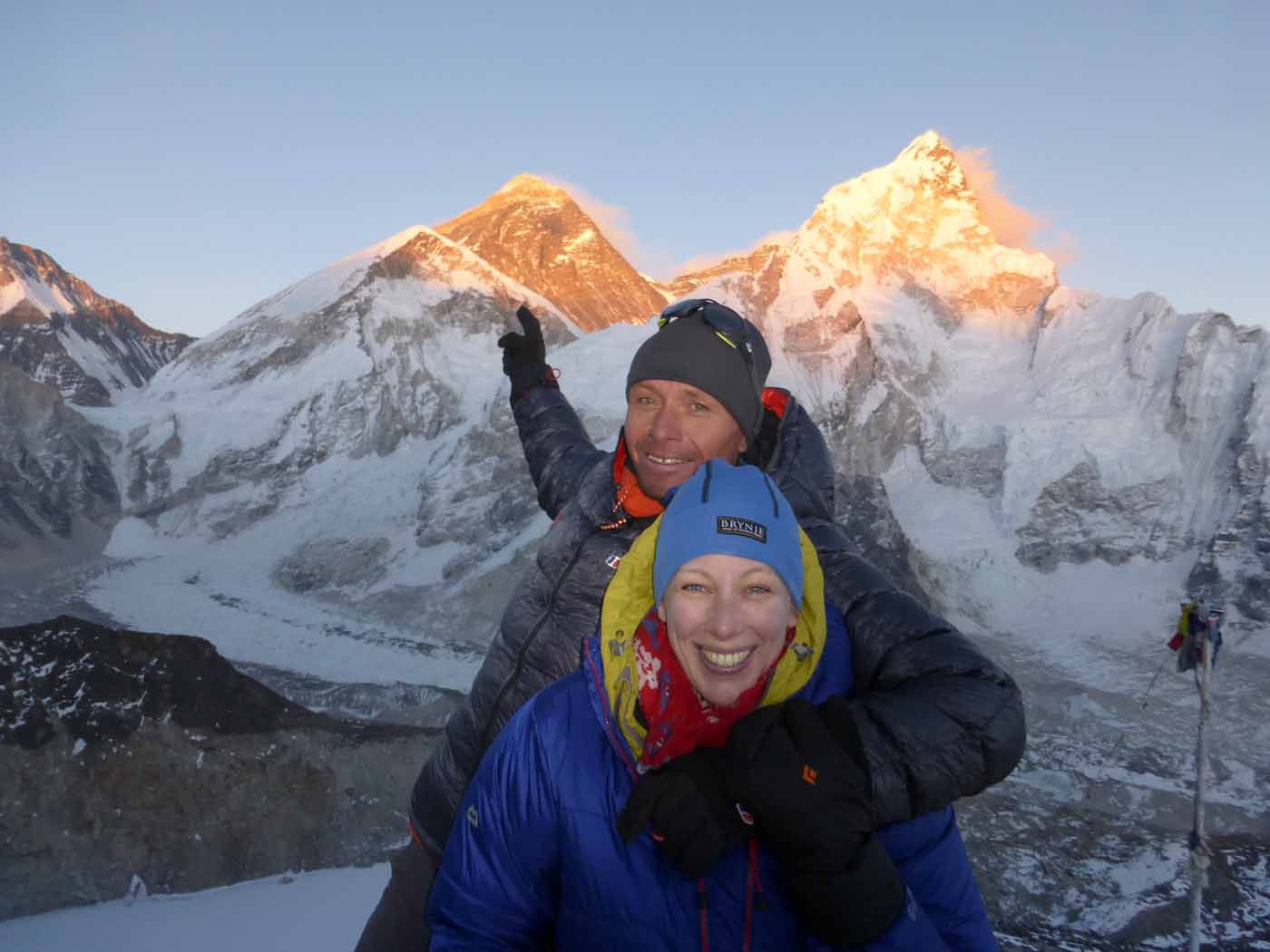 I hooked up with Bhola in less than ideal circumstances. An Earthquake had released enormous avalanches onto the base-camp of Mount Everest and his camp and many of his team had been hit hard. He’d been lucky and survived but many of his Sherpa crew had been less fortunate. Many other wrinkles had been added to his face as a wall of rock and ice had slammed into his camp killing people instantly and annihilating every tent standing. He’d been dragged off for 50 meters before coming to rest behind a large boulder. He met me off the chopper that had evacuated me and my client from Camp 1 where we’d been stranded for 2 nights unable to descend the ice fall we’d climbed through previously. His shy smile shone through his handsome worldly worn features; “Good to see you Rolfe Dai”, he said “I thought I’d lost you too…”