Updates from Antarctica. These are extracts from Rolfe's emails that give a great overview of what it’s like being a guide in the coldest place on Earth! It's not all about climbing .. seems more about digging!

12th November
Love it here!! Totally hectic setting up mode but working with cool people!! Tomorrow good chance I will be working at remote airstrip 4 hours flight from here at the coast!! Might see ? .. 4 guides flying out on tiny aircraft to make it ready so big aircraft can land here too!! Driving around on a skidoo’s v cold at night – 22 in tent!! But it is so stunning here!!

13th November
No flight today as big storm rolling in… boo!! Busy putting up enormous tent for snow machines to park under… 12+ meter high then make it stormproof plus working with Chinese film crew.. making film about Chinese record-breaker who is trying to ski whole continent… he took off in small plane to start of route but came back 30 minutes later because he left his skies behind!! Great footage !! Ha ha ha … now digging big trench around my tent to make it bomb proof .. it is getting seriously cold!!!

14th November
Time is -3 hrs gmt. So now 11 pm but still bright as day! Even 2 am is day!! The only time reference I have is when sun ☀️ goes behind mtn at 3 am and the camp is in the shade!! Then it is really cold! Now it is -21 c inside the ⛺️ ..everyone gone to sleep with buffs covering eyes.. day starts at 7 30 for guide meeting and we do all diff jobs!! Flight out to Vinson on the 18th and I swapped with another guide so I can guide Jo.. ? and looking forward to that. Very cool people here!! Learning a lot from the guides as you always say many ways to skin that cat …..!

14th November (later in the day)
Another tough day!! Stormy as hell but the guide team works outside in all weathers. today we skidoo’d to a remote runway to dig out all these fuel drums.. it was about an hour from camp and so vast and empty with a few distant mountains and spindrift blasting past.. this is what mars must be like!! Everyone has their own tent now.. a 3 man tent per person and they are pretty warm!! Only in punta did we have to share…. I am loving working with my American and Chilean colleagues they teach me a lot!! Where you are is so crazily different from here!! My work at the moment is totally weather dependent and changes all the time!! But love being here on mars!!

16th November
I was out and about yesterday with another guide and a Chinese cameraman filming a few remote mountains and the fossil sea creature footprints.. we also watched the giant Ilyushin aircraft land in a blizzard ? it’s been windy as hell here and total whiteout but not so cold ! 0nly -16 inside tent..but even this doesn’t seem to bad now.. the set up here at base is amazing! The kitchens super modern and the chefs are amazing.. buffet every meal with 4 choices of amazing main courses and deserts cheeses etc .. I am going to miss all this when I go to Vinson and the truly hard work begins.. the guides say nothing has been set up and we don’t know what condition any equipment that has been cached there over the winter is in.. so straight into camp building, in a place that’s a 2 hour flight from here.. All much more remote and much much colder as it is 2000 meter higher on the plateau.
I am enjoying the facilities here and the people (82 in all) who come from 22 different countries and all love working in Antarctica.. great fun for now!

18th November
Big day today with lots of specialised medical training and I was asked to take 18 of the hotel and kitchen crew on a day trip to a mountain about 2 hours drive away. I was driving a machine called Tucker 5 1600 series… google it.. it’s a monster. Just to leave base is a huge procedure.. lots of safety equipment to take.. forms to fill out and comms to establish.. then I drive this thing straight up a glacier into a whiteout! Following the occasional flag but running on gps! The mountains themselves were just ordinary glaciated hills with very limited views but once the guests come I will be expected to take them around in this machine and huge 6 wheel drive trucks all the time.
we have been on standby for the last few days to go to Vinson but everything has been put on hold because of blizzard.. very big winds.. 58 knots and v cold and zero vis most of the time.. made a huge wall around my tent and this is working. It is now midnight here but full light and tent rattling and snapping in huge gusts.. everything is frozen solid in tent.. still in standby for Vinson and could fly literally any time the metro guys give thumbs up ?..

19th November
I think ? super busy on the runway over last few days as they are desperately trying to get planes in but the storm still raging! Digging out approach barrels, hundreds of them which is cold and hard work.. you have to make sure you don’t sweat as this freezes straight away !! Back out there in 30 minutes and getting totally kitted up etc.. wishing I was in Thailand right now!!!

19th November again
This storm is causing havoc.. the Ilyushin landing recently was in a total blizzard. so now bosses are getting us guides to make runway again by digging up hundreds of barrels

20th November
We are being hit by what they say is the storm of the century.. the pic is of one of the dining tents being whacked. Last year a similar storm hit this camp and blew away 13 or so tents.. one had a person in it and she traveled a couple of hundred meters inside.. so I have been busy!! Digging digging and more digging .. built 16 walls around staff tents whilst the other guides reinforced the big mechanical tents with enormous belts.. so far the wind is hitting 48 knots around 90 kph but tomorrow it will build up to 65.. so haven’t had time to think or respond.. I collapse dead beat into my tent every night.. since we haven’t got supplies in the whole camp had begun rations .. we are having breakfast at 11 am and dinner at 7 before breakfast myself and Wes try to do 2 walls each..
After dinner we do a 2 hour rotation to check every tent.. camp is in a huge grid with around 60 tents in all and doing the rotation means about 30 minutes work wearing every layer etc.. overall everyone here is super cool.. everyone knuckling down and working hard to prepare for worst which should clear by Saturday when clients are due in when we probably get flown to Vinson where no one knows what we will find!

21st November
Alone in the kitchen today… guides have been tasked to do breakfast.. absolute blizzard today… I built a huge wall around my tent but it is still shaking like crazy! The snowdrift is carrying over my wall like a wave ? and I am out in the bitter cold digging like crazy every few hours. Not sure how the other guys are doing out there!! Some of the team like the cook who is from Borneo had never camped or seen snow before and now he is in this!!!!! He is a good guy though and can cook!! Everyone on standby for the big one!! Slowly but surely the weather is getting worse.. it sounds like an animal at the moment!! And we need to be in continuous radio contact if we move any distance from the tent.

22nd November
In theory, I should be going to Vinson tomorrow as bosses keen we start to set up VBC camp one, camp two, fix 1000 meters of rope plus gps and wand the entire route. The first Vinson clients come in 4 days and worst-case scenario is where clients and set up team fly out at the same time… whatever the scenario it looks like I am going to be plenty busy!!!
But also fun at camps.. some nights are movie nights and tonight is a quiz night.. most of the folk stay up late since they have nothing to do until clients arrive but guide team out and about securing camp for what is predicted to be some pretty crazy weather. At the moment things are clear.. the picture I sent was from camp and you can see the distant hills 20 kms away.. this photo is at 2 am!!

Hey! I am on storm patrol from 3 am to 8 am my time (gmt – 3 hours) so apart from dressing up for battle and heading out for 10 minutes to check every guy line and tent I will be sitting in front of a heater in the kitchen tent..

23rd November
Flying to Vinson now!! Could be a while out of contact

We reckon a winter ascent on Toubkal and climbing Mt Kenya will feel like a holiday for Rolfe after all this!

Shout out to our friends at Berghaus for kitting Rolfe out with their top notch gear.. the Extrem Ramche Down Jacket is keeping him toasty in Antarctica. Check out their amazing Cyber Week Offers! 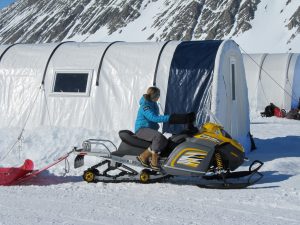 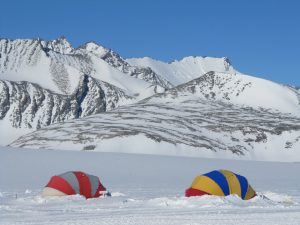 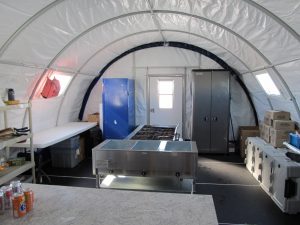 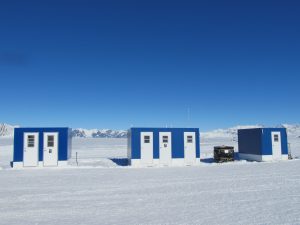 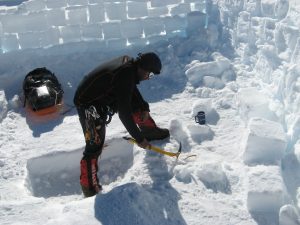