Expedition in my Homeland 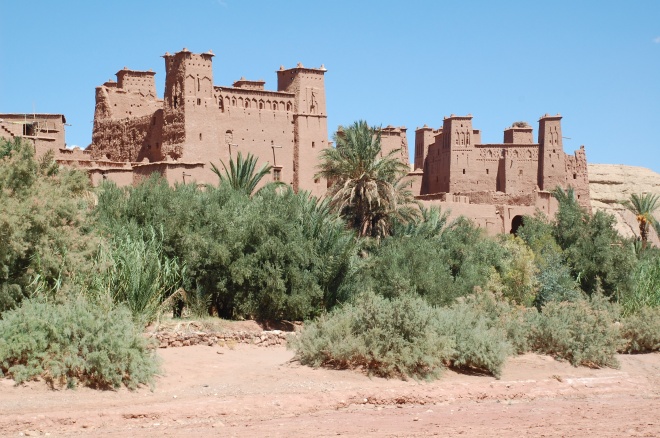 This expedition was a special one for me as it was in my homeland Morocco. As soon as I heard Rolf
was going to be the leader for the expedition I knew it would be a great and amazing one because
I have worked with Rolf many times In the Atlas mountains and the Sahara Desert with my Father’s
company and I consider him to be a great friend (my brother from another mother and father). I met
up with Rolf in Marrakech airport – he was on an earlier flight, which gave us lots of time to catch up
and discuss the expedition before the clients arrived. 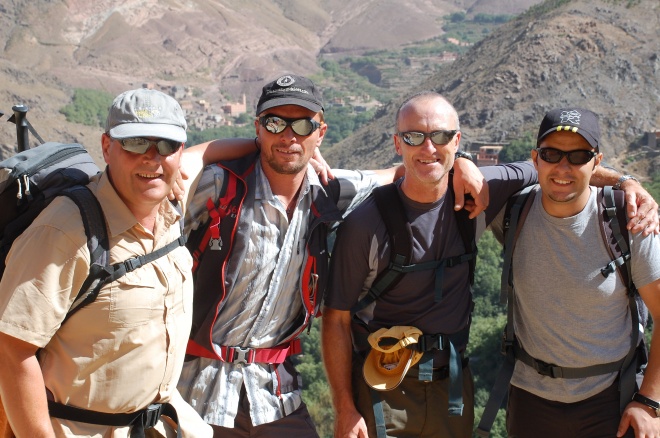 Early in the morning we had our breakfast at the hotel in Marrakech, then we drove to the High
Atlas Mountains to Imlil, the village where I was born and the start point of our expedition. We had
a warm welcome from our Berber crew at my Father’s hotel where we drank traditional mint tea, or
as we like to call it ‘Berber Whiskey’ before setting off up the mountain. 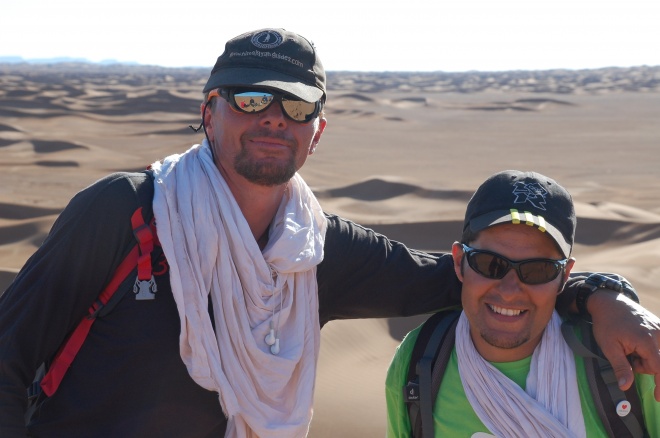 We start our adventure through my village, the clients immediately start to become excited as
the scenery in this area is stunning. As we climb higher the view becomes breathtaking and the
vegetation is sparse, we can feel the mountain welcoming us. We stop for our first lunch at Sidi
Chamharouch meaning ‘Saint’. Chamharouch is the name of the sultan of the Jinn’s. It is located
at 2,350m altitude and is halfway on the trail of Imlil to the Basecamp of Toubkal. There we find
a group of small shops and cafes that surround a big white stone under which was built a sort of
mausoleum with a so-called tomb of the King of Jinn’s. Then we continued to our first overnight on
the basecamp of Toubkal at 3,207m. 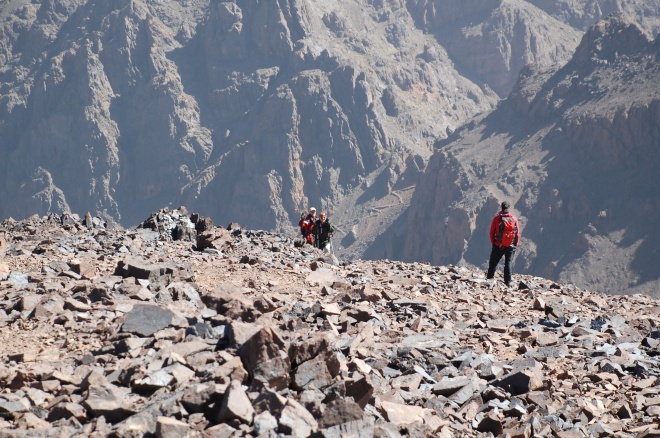 The next day was my favourite day because we were climbing Ouanoukrim as it has two summits,
Timzguida 4,089m and Ras Ouanoukrim 4,083m which are the second and third highest peaks of the
Atlas Mountain range. We had our picnic lunch on the top, it was good fun and a challenging day the
clients enjoyed it, as myself and Rolf too, it was a great day sunny and clear. 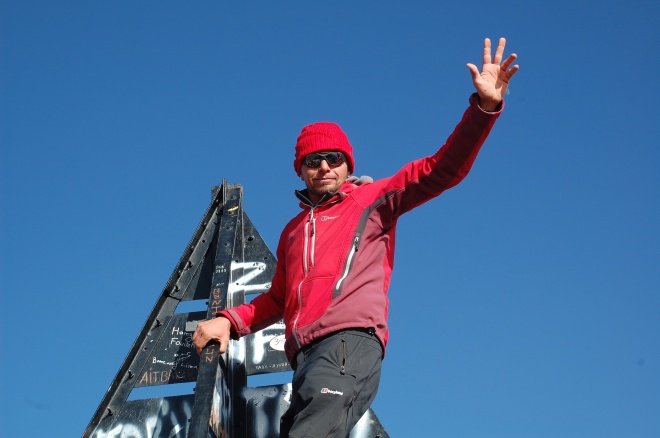 Day three we climbed the highest peak in North Africa Mount Toubkal. We start our accent early and
as we climb higher, the paths become steeper and rugged in places, but the gain in altitude awards
dramatic views of Marrakech, the Anti-Atlas mountains, Sahara Desert and row after row of sharp
granite peaks at the summit. We started our decent back to the refuge where we had more food and
a good rest. Then we continued down to Imlil valley where we crossed Armed, the biggest village
in the valley. Any people we met on the way down wanted us to come to their house to have mint
tea (a Berber tradition, which I am very proud of), but we needed to get to our peaceful hotel in the
village of Tagadirt where we enjoyed a lovely lamb tagine. We were all very tired as we had had a big
day. 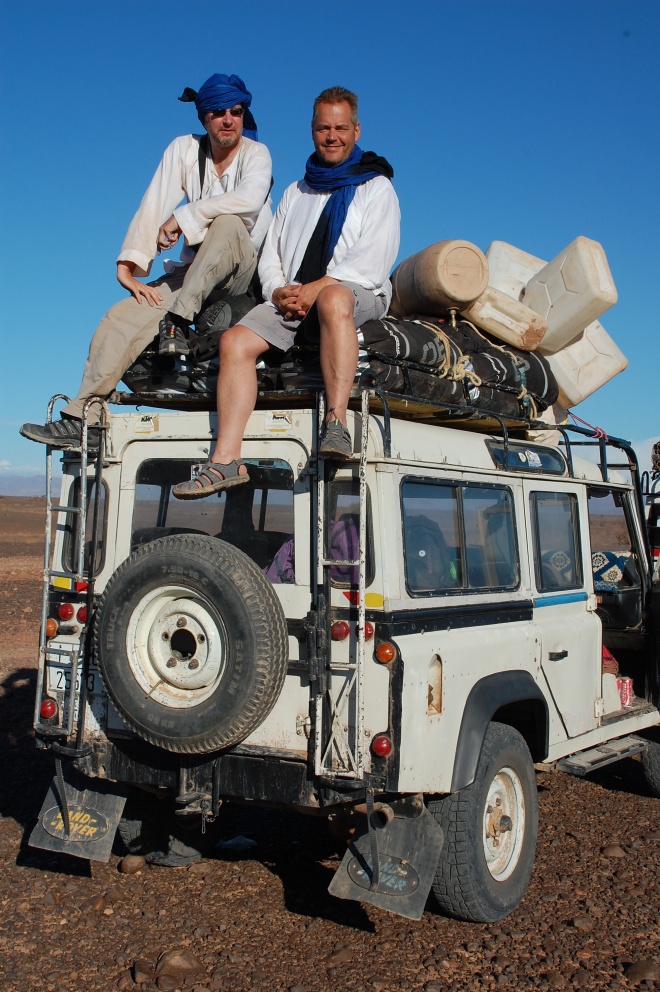 After a much-needed sleep and a good breakfast on the terrace of the hotel our Berber crew came
with their mules to carry our luggage down to the centre of Imlil where our coach was waiting for us
to drive through the High Atlas from the pass of Tizi N`Tichka 2,262m to Ouarzazte. The next day we
visited the town and the fortified village (Kasbah) of Ait Benhaddou a UNESCO World Heritage Site. It
was a very hot day. 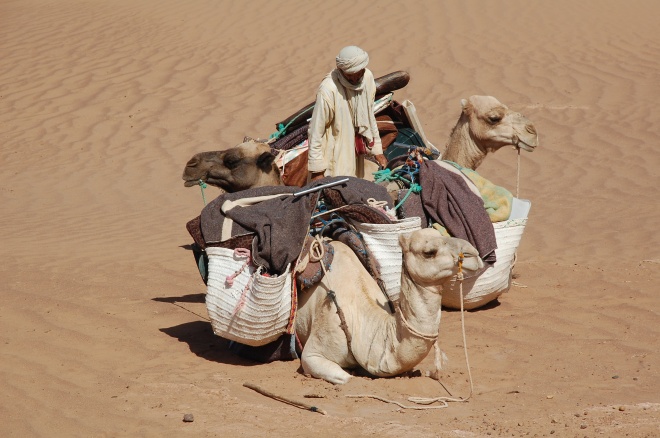 After morning briefing we drove along the Draa River, which is Morocco’s longest river (1,100 km)
till we reach the start point of our next challenge M’hamid El Ghizlane the last town in Morocco near
the border of Algeria, where we meet our lovely Berber crew and camels. We had lunch then we
started our Sahara challenge through the oasis and beautiful dunes with our three camels (4×4 of
the Sahara). The Sahara can be an inspirational experience at night, with the air being crisp, clean
and clear and the stars being so close you can almost touch them. Over the next six days we crossed
the desert for 100Km covering sand dunes, salt pan, and hamada (rocky ground). We experienced
most of the forces of the Sahara during this trip: we had extreme heat, windstorms and rain, which
gave the sand such a beautiful colour when it stopped. The Sahara is the world’s largest desert.
Only a small part of the Sahara is fertile and it is here that corn, dates and other fruits grow. These
parts are fed by underground rivers and oases. The Sahara stretches across much of North Africa
covering over 9,000,000 square kilometres (roughly the size of the United States). In fact, the Sahara
covers some 30% of the entire African continent. It is the hottest place in the world with summer
temperatures that often exceeds 57 degrees Celsius. It has an annual rainfall of 0 – 25 millimetres
and is very windy with windstorms sweeping the sand up to heights of 1,000 meters and moving the
sand dunes constantly. 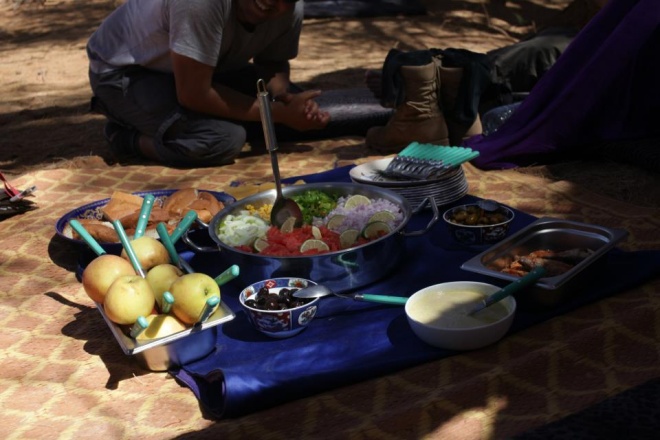 On our final night we surprised everyone by dressing them up like nomads and for that night we all
became people of the desert we had lots of laughs, a wonderful end to our Sahara odyssey.