After our experience of the earthquake at Everest Base Camp (5400m) in 2015, our ascent of Kilimanjaro (5895m) and then Stok Kangri (6153m) in the Himalayas last year (the last two outings with 360° Expeditions), I wanted another mountain challenge.
I decided upon Mont Blanc (4810m) – the highest mountain in Western Europe! Although not as high as our previous trips it would be much more technical and potentially a lot more dangerous. My wife Fiona decided it was not for her, so I joined a small group of other individuals with the same goal. After a lot of research, I concluded that 360° were again the company of choice. Perhaps the “free wine with dinner” swung it!

Fitness was the main requirement, so in addition to my recent running regime and regular mountain walking, Fiona and I completed the Walkers’ Haute Route in August (unsupported) – 146 miles from Chamonix to Zermatt in twelve days with 13500m of ascent/descent carrying 10Kg of our own gear. We also added on, a climb up (and down) from Zermatt to the Hörnli Hut (3260m) on the Matterhorn, for a little extra acclimatisation! Feeing fit after this, my last training outing was a fast jaunt up and down Ben Nevis (1345m) in just 4 hours.
Happy that I was as prepared as could be expected at my age, I flew off to Chamonix on 5th September to meet the rest of crew. One guy was injured so there would just be three of us; James (23), Luke (27) and me – the old man (62). We met Dave Green, a very experienced mountaineer/guide, (originally from Brighouse) in the hotel for our briefing.

Day 1
First, we did some practice “rope-work” as we would be spending most of the time in the high mountains roped together for safety. There is a risk of either falling off the mountain or into a glacial crevasse!
Then, after a drive through the Mont Blanc tunnel in Dave’s camper-van, we arrived in Italy for the first of three days altitude acclimatisation. We took the lift up to the Refuge Torino (3375m) on the South side of the Mont Blanc massif.
We then did some practice roped-up glacier walking in crampons and jumping crevasses for a couple of hours. After dinner it was early to bed. 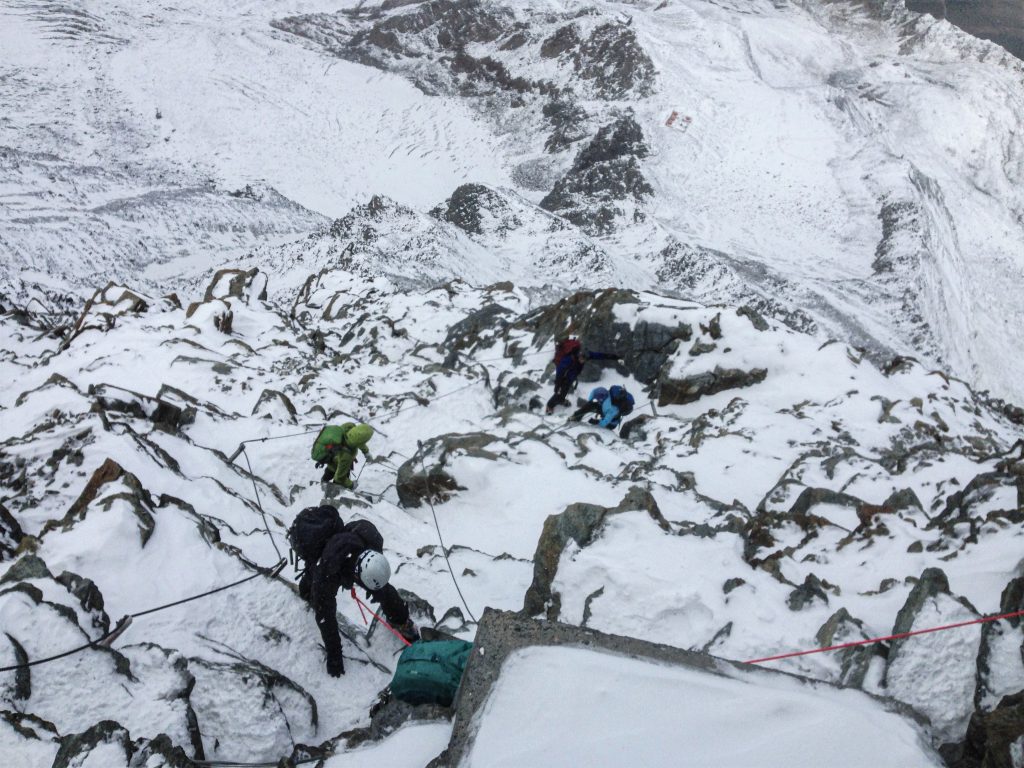 Day 2 & 3
This was to be a proper glacier walk from Helbronner (above Courmayeur – Italy) across the Mer de Glace (the largest glacier in France) to the Aiguille du Midi above Chamonix.
Fresh snow made route finding difficult and Dave had to pick a way through the myriad of deep crevasses. We had to jump over many 100m “abysses”, when they were not too wide, or tentatively make our way across narrow snow bridges hoping they would not give way. Fortunately, we were able to find an alternative bridge route rather than use an aluminium ladder that had been precariously perched over one 2m wide crevasse!
The final steep, icy climb up to the peak of the Aiguille du Midi gave us a taste of the exposure we would experience in the following days.

The next day the weather was terrible. Cold, windy, snow showers and spindrift. Dave suggested we go to a local rocky outcrop not far from the refuge to practice some rock and ice climbing in crampons. Soon after the start of the first pitch; which traversed the base of a small cliff, at the top of a very steep ice slope, above a crevasse, Dave had a freak accident. A 3ft long slab of granite, with a knife-sharp edge, toppled down onto his hand. He was in intense pain. Very fortunately, above us was an American guide – Mark and his client – Mike. Mark heard Dave’s request for help and within a couple of minutes Mike came bounding down the cliff, abseiling out of the murk above. He was an experienced medic and expertly dressed Dave’s smashed hand. Mark had abseiled down and evacuated us to safety. This is when you really do need a reputable tour organiser. Within a couple of hours 360°, and their local agent – Stuart MacDonald, were able to find two guides who were available at short notice. Cooky from Peru and Johanna from Sweden. Both excellent English speakers! Anything can happen on the mountains and we were now back in business! 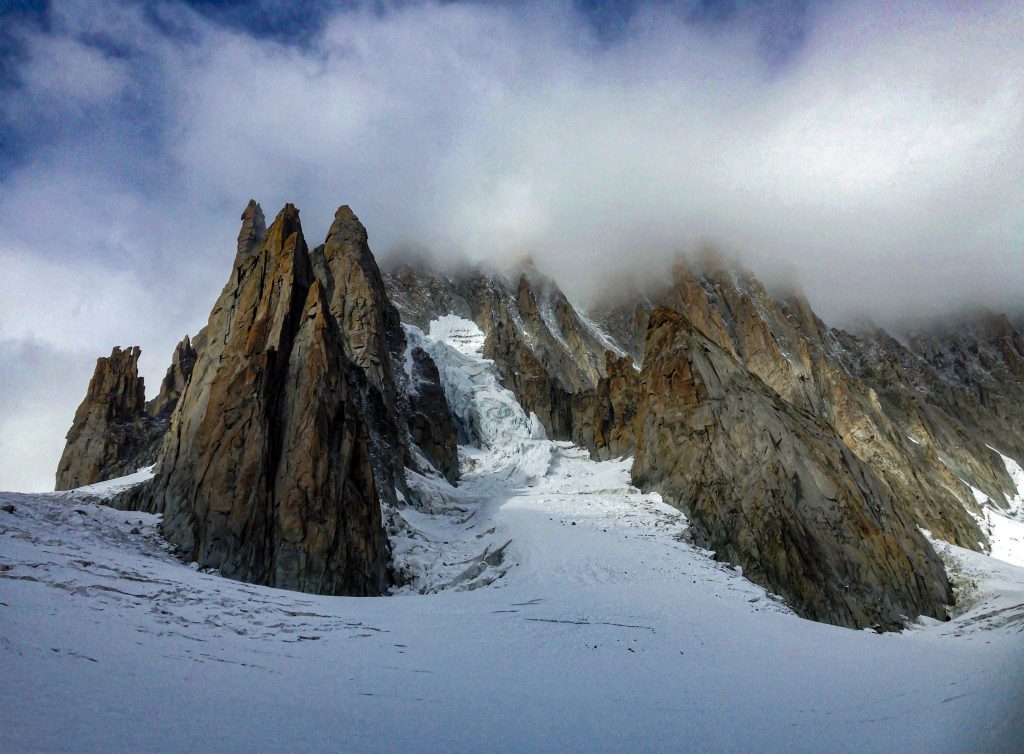 Day 4
The two lads (James and Luke) were allocated to Cooky. They were a very well-matched unit. However, I hit the jackpot! My own personal, super fit, very pretty, blonde, Swedish girl, mountain guide – Johanna!!! We took the Bellvue cable car from Les Houches and then caught the mountain train to Nid D’Aigle (2372m). This was to be the start of the ascent.
We had a reasonably straight forward walk up to our first night stop at the Tête Rousse Refuge (3167m). It was hot and sunny, overnight snow had fallen and lain. However, crampons were not necessary on this section.
The original plan was to ascend from Tête Rousse to the summit and then to return to the Refuge du Goûter (3815m) to overnight, before an easy descent on the final day. However, the weather forecast was very poor (strong winds and snow) so the backup itinerary was employed. This meant just the short ascent to the Goûter on the bad weather day. Then a summit attempt followed immediately by the full descent back to the Nid D’Aigle on the final day. A very big trip indeed! 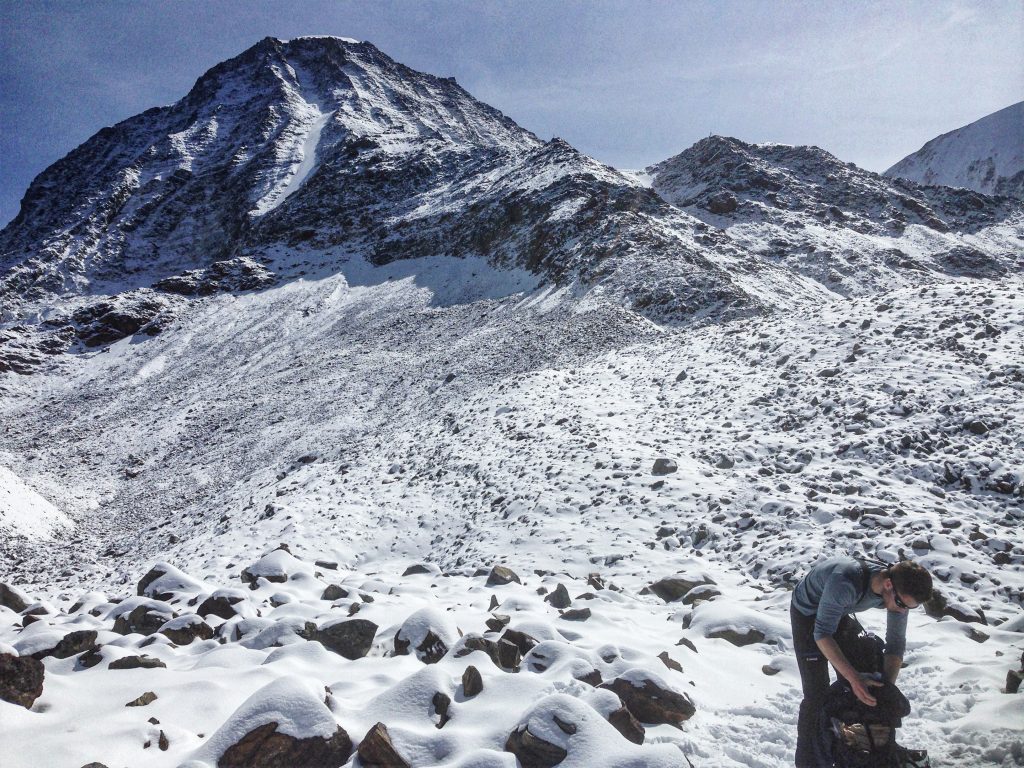 Day 5
This was the 2000ft Grade 1 scramble from Tête Rousse to Refuge du Goûter. For all of the summer, until three days before, this route was dry and straight-forward. However, all the recent fresh snow meant we would have to do it all, wearing crampons. Perhaps the most dangerous part of climbing Mont Blanc is crossing the Grand Couloir (aka “Death Gulley”). This is a 100m wide gulley that has a very high amount of rockfall. (On average there is a stone fall every 17 minutes and six people are killed here every year and dozens injured.) It is safer to cross it when it is very cold and the ground is frozen as there is less stone fall. It is also safer when it is blanketed in snow as this slows down the falling debris.
We crossed at 8.00am before it got warm, moved efficiently and, protected by the snow cover, did not see any stone fall. Phew! 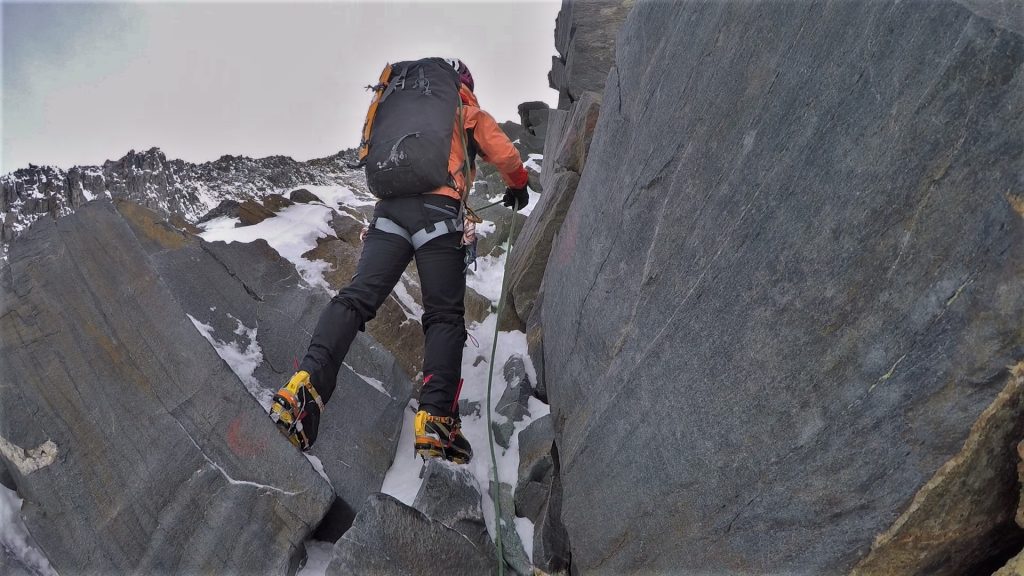 Johanna leading up the scramble

Next the scramble. This was not as difficult as I had anticipated and, after getting used to “front-pointing” with crampons on rock, really quite enjoyed it. Johanna had me on a tight rein and the permanent wire cables on the more exposed sections gave a lot of extra security. As we were in no rush, we took our time but were still at The Goûter Refuge before 11.00am. We then had all day to relax, rest, eat and sleep before the big final day.

Day 6
Summit Day at last! The weather forecast was looking very good. We were up for breakfast at 2.45am and fully kitted and ready to go at 3.45am. Head torches blazing we were off into the freezing cold night air. We had to be right back down to Nid d’Aigle to catch the last guaranteed train at 4.00pm, this meant we had 12 hours. This was certainly possible on average timings but we could not hang about. Johanna set a brisk pace and we slowly hauled in many teams in front of us who had set off earlier. We got some disapproving looks and a couple of disparaging remarks from some macho men as our party, a very slight female and an old man, overtook them in the soft snow to the side of the “path”!

We were at the emergency Vallot shelter (4362m) in good time. Out of the wind we put on an extra layer to combat the dropping temperature as we ascended, had a snack and then continued the never-ending climb. 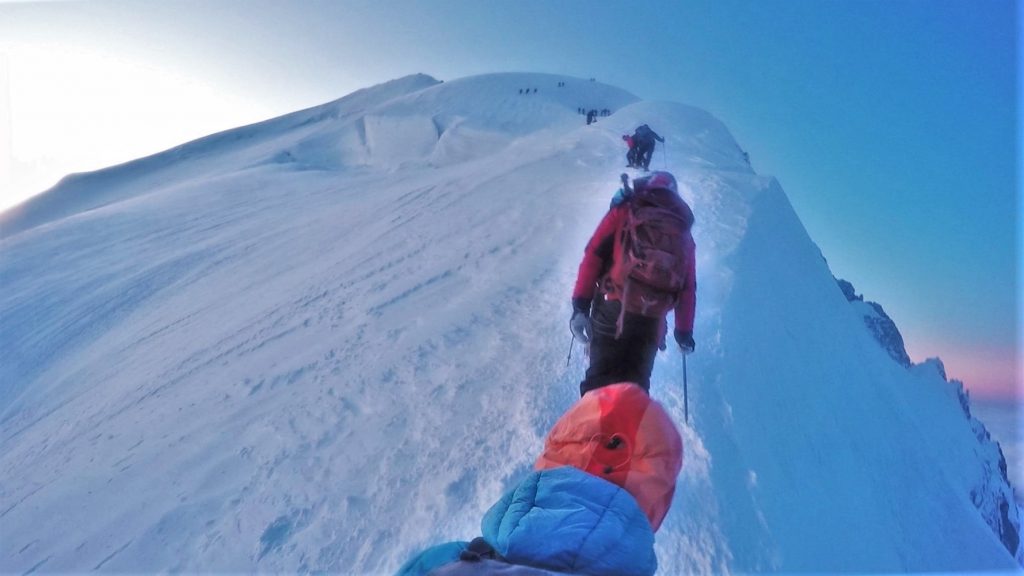 On the Bosses Ridge the trail follows the knife-edge snowy crest. It is only 2ft wide with 3000m, near vertical, drops on both sides. There is nothing to hold on to and the exposure is very apparent. My balance is not as good as it used to be, and this was a section I was somewhat apprehensive about.
The sky was now getting lighter and the fantastic terrain all around had become visible. However, my 100% focus was just on Johanna’s heels. Then after a few hundred metres of this trance like state, the ridge finally broadened out and … we were there..The summit of Mont Blanc (4810m), the highest point in Western Europe! It was 7.40am, just after dawn! The wind completely dropped and the view was tremendous! It had taken just 3h:55m! We were well ahead of schedule! Fantastic! 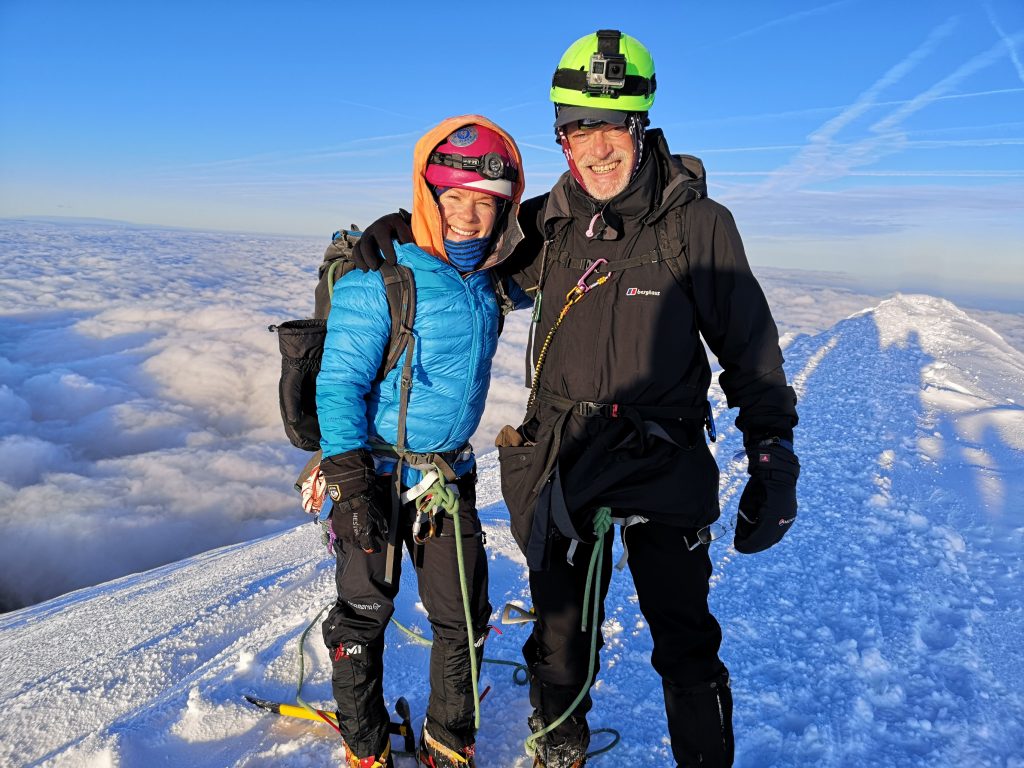 The highest people in Western Europe!

After ten minutes of the usual posing, photographs and videos, we set off back down. I was in front, Johanna had me on a tight rope from behind. The problem was now passing the folks still ascending up the Bosses Ridge. This required some delicate footwork and balancing on the snowy edge to ensure no one took a fatal slip.

A short break in the Goûter Refuge collecting our gear, we now had the tricky 2000ft scramble descent down to Tête Rousse. Climbing down is always more difficult than climbing up and, because the rock was covered in snow and ice, it was made even harder as we had to wear crampons. I made full use of the permanent cables and, given the confidence of the tight rope from above, held by Johanna, made good progress. It was not as difficult as I had anticipated. 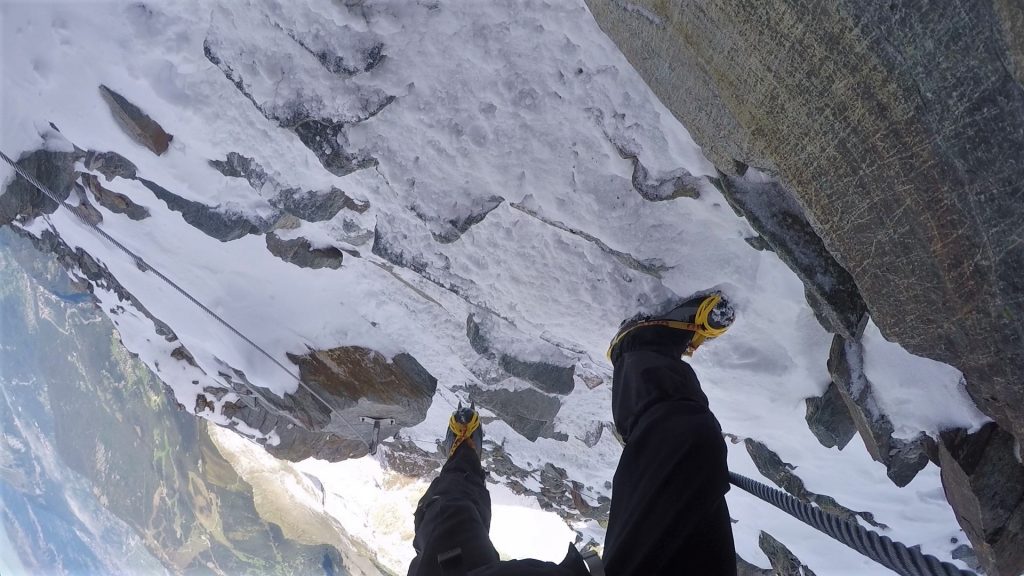 The view down between my legs!

Now the last major danger, the final crossing of “Death Gulley”. It was now around 11.00am and the ground was warmer. We waited and watched a few, fist sized, stones skeet down the slope, bouncing off the, now hardened, snow cover. Any one of these could take our heads off! Then “go”! We scampered down and over the new narrow path in the snow across the couloir. Phew! Safe again.

Then, after clearing the snow line and removing our crampons, we jogged the last mile or so to get to Nid d’Aigle at 1.30pm! So, we summited and descended the whole route in 9h:45mins (a total of 16 miles with 2835m of ascent/descent). What a result! It demonstrates how much easier it is when you are fit!

Back at the hotel I had a welcome shower, a relaxing jacuzzi and a sauna. That evening we had a celebratory meal and a few(!) drinks with our complete team and the next crew from 360°.

What a fantastic, thoroughly enjoyable experience.
Now to plan the next adventure…….