It’s around 1030 pm and I should be asleep, gaining useful rest in preparation for the tribulations that lie ahead in just a few hours. Instead I’m wired and awake in my tent, listening to all the noises this summit night brings; my tent mate raspingly breathing deeply, the shuffling in the cooks’ tents in ours and adjacent base camps, the low-level chatter in tents and the occasional bell from the neck of one of the pack horses.  Knowing we’ll be stirred in about half an hour, trying to fall asleep seems fairly pointless so I plug my music back in and close my eyes to drift away and relax.

Sure enough, “Good morning!” is whispered against our tent by our local crew, the guys who normally bring us bed tea. In a near-silent, cramped, unchoreographed duet, my tent mate Martin and I sit up and start the process of getting dressed in preparation for whatever lies ahead. We’d slept in thermals, so it didn’t take long to get the rest of our kit on and soon we emerged from our yellow two-man cocoon to wander to our mess tent and see what was what. Tea, hot milk and porridge was laid out ready for us to load our bodies with hydration and sustenance for the hours ahead and our ultimate objective of summiting Stok Kangri.

The rest of our motley crew slowly appeared, looking that strange mix of excitement and apprehension, anxious yet adrenalin fuelled.

The clock ticked on toward midnight, our agreed start time and those who were heading off began getting their final preparations together, ice axes stowed, gloves on, med’s accessible and more importantly finding the mental reserves to start what would be a long 12 to 18-hour summit day.

Harnessing our packs, we trudged off into the dark, head torches lighting the way, good luck hugs warming us from those remaining, whose summit had been reached prior to this point. Heading out of camp it became quieter and darker as we approached the incline to the first ridge, shielded from any winds, this ended up being a straightforward plod, greeted at the ridge by the customary flapping, withered, prayer flags. Half an hour or so this took, instead of what was suggested may be an hour to an hour and a half, conditions were seemingly on our side.

Gathering ourselves and taking an early breather, we learned two had turned back, altitude had caught up with them, down to eight from the original dozen.  We rekindled our focus and started off once more toward the glacier and the start of what would be certainly be the crux of our climb. With a stable glacier in front of us, we got to a point where crampons made more sense than potential tumbles, so in icy temperatures we dropped our daypacks and fiddled with our crampon straps, helped where needed by our climbing Sherpas who had joined us for summit night.

Spiked up, we began the traverse of a large expanse of ice, with a low risk of crevasses we stayed un-roped, consequently progress remained good, heads down and relatively silent as we battled with our own demons. Personally, I could feel the increasing altitude and physical exertion starting to bite, with a little voice starting to kick in in my head telling me this was going to be really tough.

We crossed the glacier in what seemed like about an hour or so, but for me, time becomes somewhat an irrelevance in situations like this, it takes on a life of its own, bending as it wills.

With crampons now removed, any sporadic snow and ice on the impending zig zags could be avoided. And so, the heart of the matter presented itself ahead of us, numerous zig zags and at times more direct ascents up the large face of Stok till the final summit ridge. This ascent became a deeply engrained personal battle for me, against the now very sub-zero temperatures, the bodily pain I was feeling in my ravaged shoulder (from a number of surgeries and carrying my pack for days), the niggling head ache I could feel brewing, exhaustion and most tellingly that voice in my head telling me just to sit down and stop. As zig followed zag, and the night began to achingly slowly recede, I took a final set of pain relief to help see me through. A fellow team member stopped to get her fingers warmed by a Sherpa as the cold continued to bite, harder than before and as I spotted my compatriot being warmed I noticed how cold my own toes and fingers were. Stamping my feet and clapping my hands, combined with a stern word to myself, I resumed this dam ascent. Remind me why we do this?

On the silhouetted horizon, dark gave way to an indescribable organgey-purple as the world slowly turned to start to bring us some light and warmth, but that would be a while yet. The final ridge lay ahead and while I felt we’d broken the back of this ascent, there was work still to do. We slowly neared the 6000m mark on our climb, when suddenly in front of me, my tent mate and old friend stumbled. What looked like just an innocuous stumble suddenly appeared a bit more serious as our crew administered oxygen, and out of earshot of me, calmly supported him through how he felt and what would happen next.  We’d planned this for a year, and that shared summit moment suddenly seemed to be snatched away. I had to deal with my own battle, Martin was in safe hands, far safer than I could give him. Onwards I pushed, my head torch dying, but slowly it was needed less and less. After around six hours we’d reached that summit ridge, a few more hundred metres of ascent, scrambling and ridge line walking would see us there, and to greet us came the sun, warming and giving a renewed hope and determination.

Seeing my fellow climbers tucked behind rocks, recuperating in advance of the next and final phase of the ascent boosted my resolve and I knew as tough, challenging and exposed as it may be, I’d summit this. This was a matter of digging deep for a final hour or so.

As we roped up, I could start to see the route to the top. If I’m honest, this last part; the scrambling and the ridge, were possibly the best bits of the whole climb; exhausted, drained and with little left, I actually enjoyed it.

The focus of scrambling; where my hands went, where I put my feet, took the attention from just how spent I was. We were now climbing in early morning sunshine with crystal clear skies and amazing 360-degree views all around us. Then, a final left-hand turn brought us onto the summit plateau. 7.07 am. Summit. After a long emotional hug with a fellow team member, I parked my backside in the heaped summit snow to gather myself both physically and emotionally.

Another 6000m plus peak to my name, but this seemed harder than the larger ones I’d previously topped out on, the mental ghouls of a previous missed summit certainly had a big say in my mental state, nagging me all the way on this cold and long summit, more than ever this one was a battle of wills. The negative voice in my head, reminding me of what had been before, while my inner stubbornness and determination won the fight of supremacy to reach the top.

This was a great experience, with great people; my fellow climbers, the local crew and the legendary Rolfe at the helm, ably assisted by his lieutenant Mattias, a sure-footed leader in waiting, if his jokes improve. Thank you 360 for yet another awesome trip. To anyone thinking of Stok, don’t under estimate her, yes, she’s a mere smidgen bigger than Kili, but boy she’s a far bigger kick in the pants! 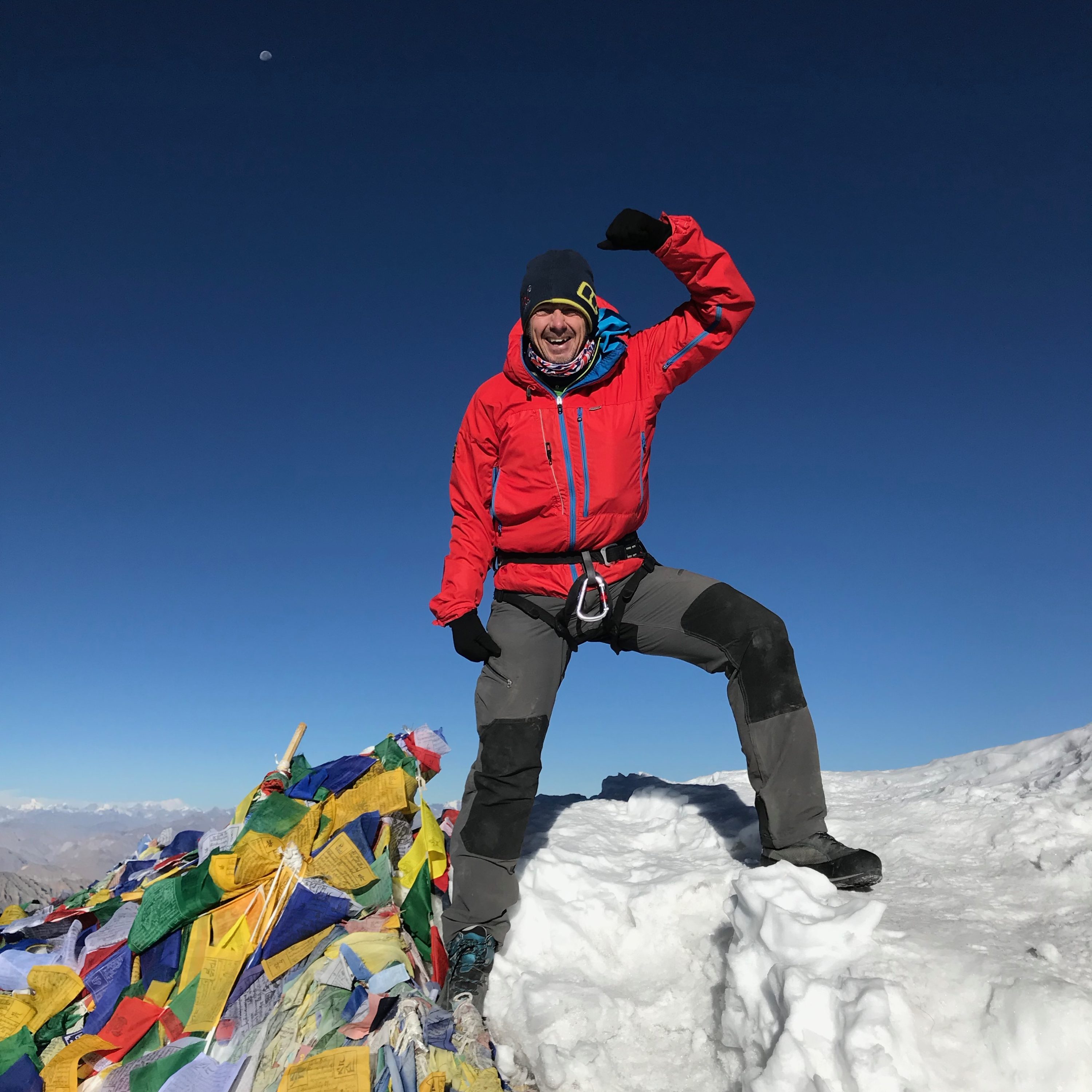