The summits of Island peak and Lobuche East, weeks on the acclimatisation treadmill, and 5 journeys through the Khumbu icefall had led to this notorious place; the South Col of Mount Everest.

I had arrived without using oxygen; sure I had used it to get warm as I left camp 3 this morning but I switched the regulator off after an hour into the lengthy day as the sun’s rays became superficially stronger. 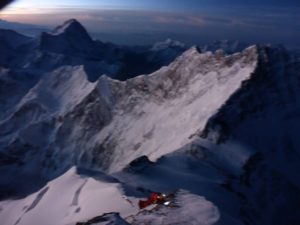 We found our tent to begin the routine of brewing up. Our future had been decided by the last weather forecast; 35 knot winds would begin to slam into the summit at 05:00 the next morning. This gave us 6 hours until our planned departure for the summit at 20:00. I had watched Jo carefully during the build-up and knew that we could summit quicker than this but I wanted an hour or two up my sleeve for the inevitable shit hitting the fan. We began to get ready for what is proportionally the world’s most read about but less climbed Alpine route; The South West ridge of Mount Everest, at 18:00.Already two lone figures were on the South Col slopes. I watched them through the steam flowing up from our boiling pot as it snuck through the open tent door but could not say that they were moving up or down. By 19:00 more and more people began to make their way to the route. Above us all waited those features made famous throughout a turbulent climbing history on this mountain; South Col slopes, the Balcony, the South West ridge, the South summit, the Hillary step and then the top of the world. How I had been intrigued by these names since the time I had learned to read. 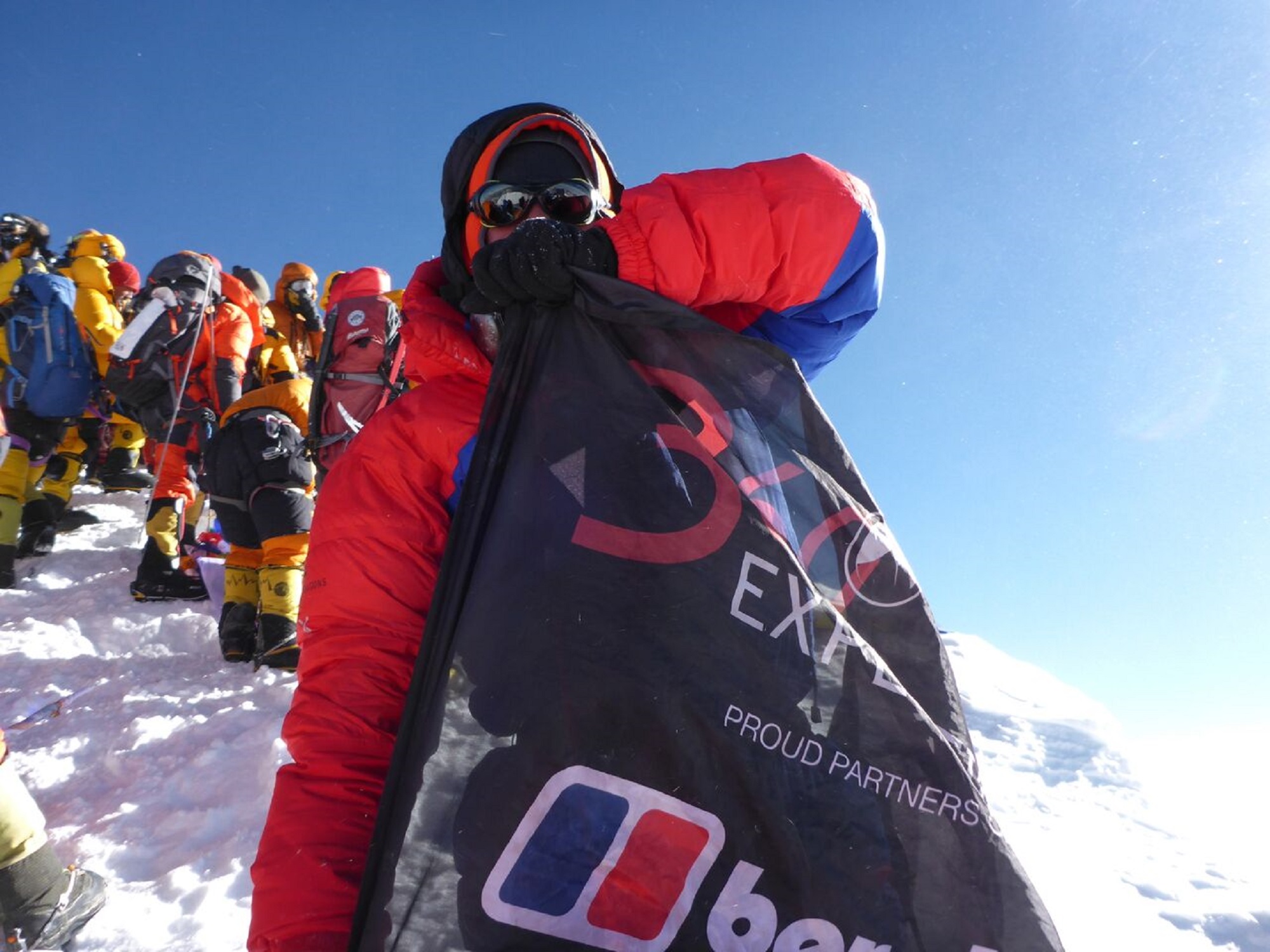 The sun had already set by the time we set off. It was warm enough for me not to wear gloves which was handy to adjust crampons and to fiddle with the oxygen set. Jo set off with her climbing Sherpa Little Dorje and I plugged in behind with Big Dorje, who is no bigger than little Dorje except for that his stature had been recently enhanced by the fact that this was shaping up to be his second Everest summit for the week; his first was to break trail for British Guide, Kenton Cool and his client Rob Lucas.We soon began to overtake some climbers moving ridiculously slowly. My breathing was in rhythm and it was reassuring to hear the steady click of my regulator delivering 3 litres of juice every minute. As the terrain began to steepen to around 40 degrees we picked up the fixed lined and the tail end of a group of around 30 people. We clipped in with our ascenders and began the 5 steps one pause high altitude dance. At first the progress was steady and everyone seemed to be moving to the groove but then the pace slowed down to one step up and one minute pauses. More and more people began to appear below us to join the queue and clip on to the fixed line. 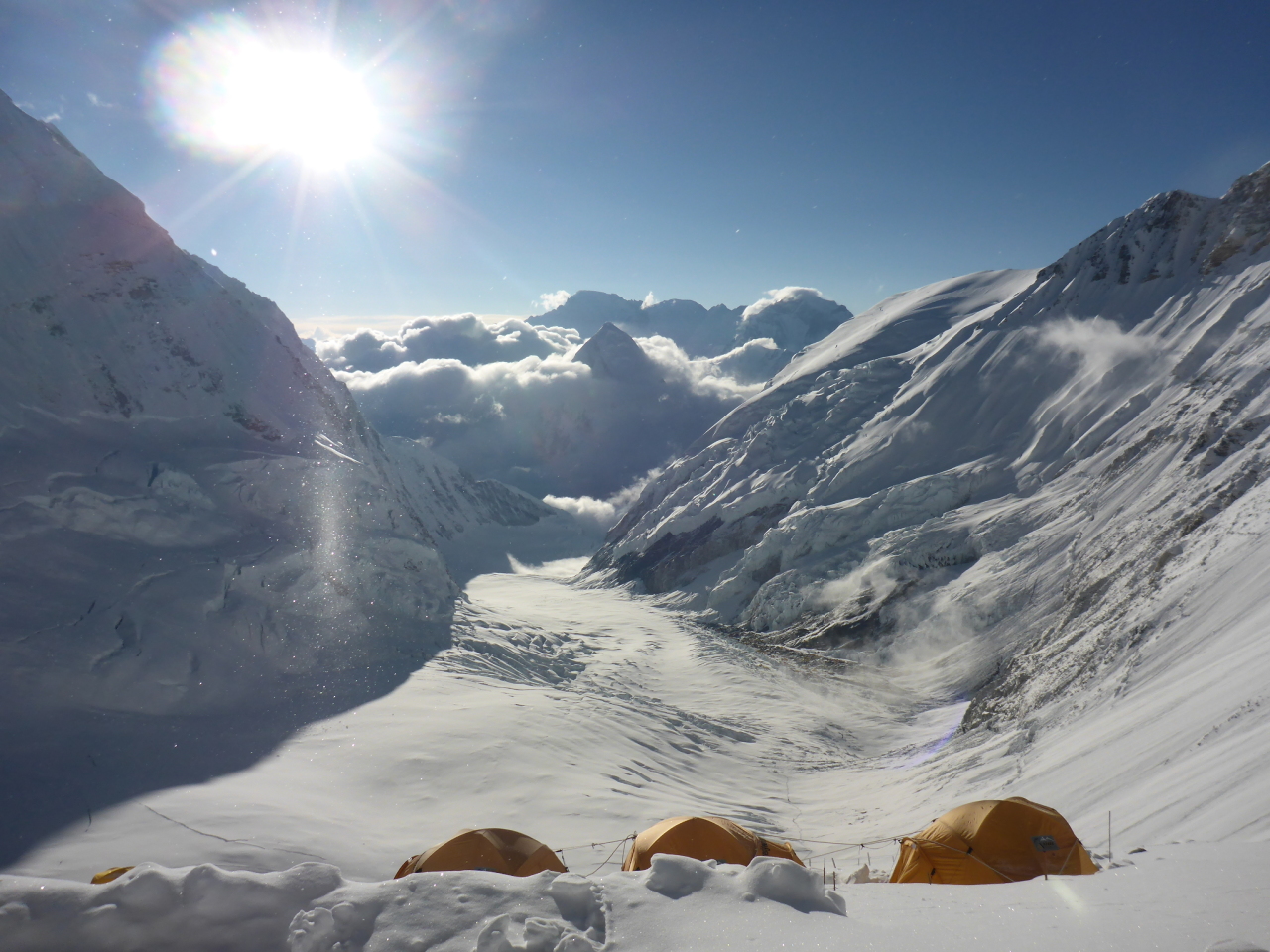 The temperature began to drop and the occasional gust threw up enough spindrift to remind us the clock was ticking. Despite wearing high altitude boots I could feel my toes beginning to get cold. Action needed to be taken but as I bend down to crank up the volume of my never-working-battery-heated-boot-soles I noticed in horror that there were at least another 30 people clipped into the already piano tight rope below me. The rope manufacturer could not be faulted for producing a brilliant product but you can only trust confidence so far and I un-clipped. Rope or anchor failure was not going to see me join 60 other climbers going for the ride of their lives into the darkness below. Little Dorje also un-clipped and I watched the bottom of his boots power up in the light of my head-torch to find out the reason for the hold-up. He re-appeared 20 long minutes later telling us about how he had to forcefully persuade another Sherpa to take his clients, a middle aged Indian lady, off the line to let everybody pass. Apparently she had wanted to rest after every step holding everyone up in the process and losing her nose due to frostbite later in the night. Progress restored we reached the Balcony in no time. Here we switched oxygen cylinders and without much of a pause Jo lead off again with Little Dorje close behind.

I stopped to change my gloves for mittens and 3 Austrian mountain guides squeezed onto the rope between us. The one nearest to me grunted as to where I was from and when I replied Australia. He only grunted to me in German from then on! We began to follow the ridge to the South Summit. The ridge from here has 2 rocky steps which would be a doddle to climb for any toddler but which proved to be as complex as grade F6 for some of the folk ahead of us; progress on the rope once again ground to a standstill and I again un-clipped and concentrated on getting my toes warm by dropping a hand-warmer down each of my gaiters. Dorje began to kick his boots rapidly into the snow and since no modern method proved to work in getting any feeling to return to my toes I began resorting to the age old Alpinist technique of rapid toe-scrunching. As we clambered up the rocky stuff we managed to overtake some more climbers and speed the blood flow again. The groove was restored. 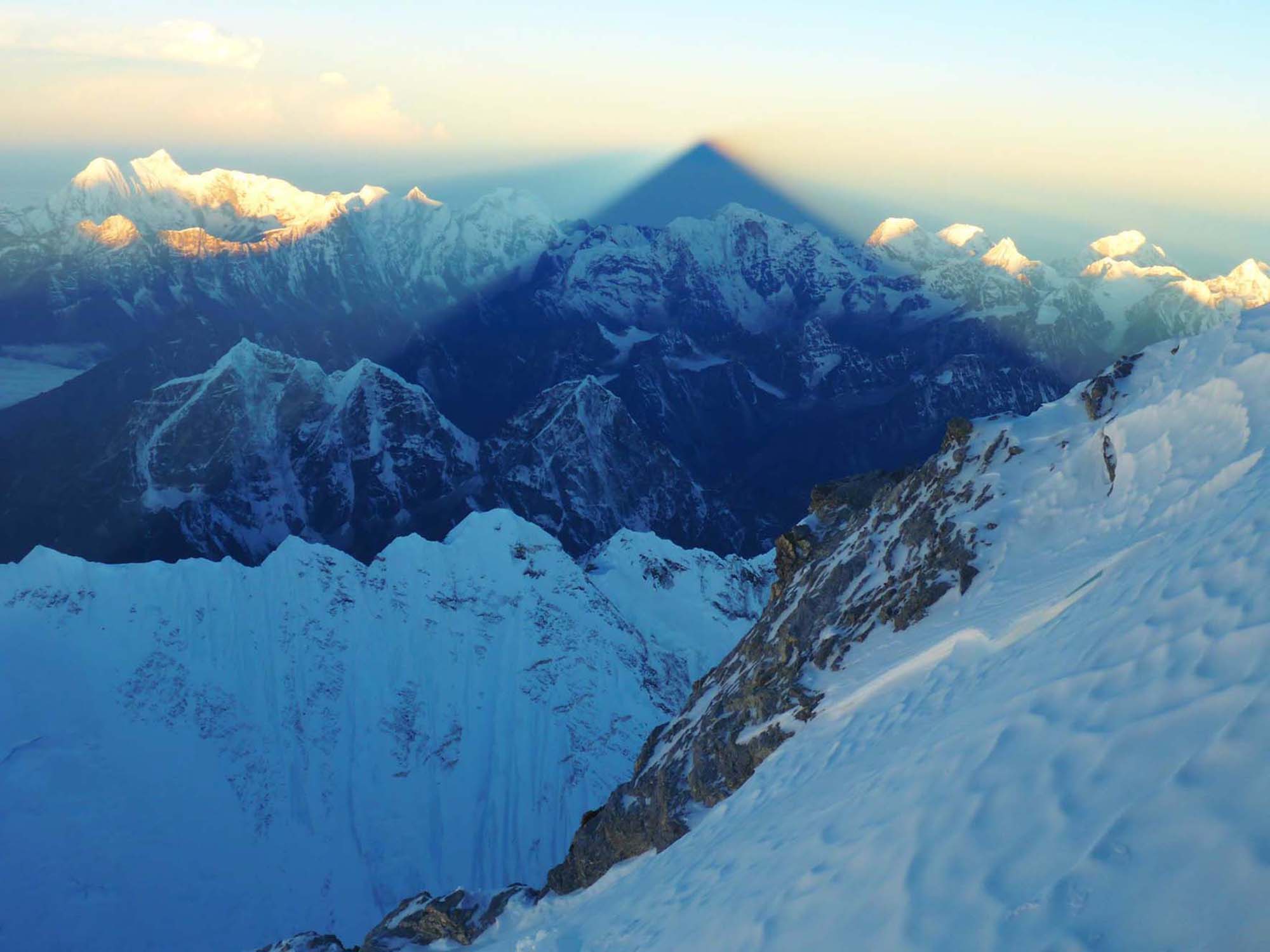 The sun rose as we neared the South Summit and in awe I watched the mountain’s giant shadow stretch itself out over the distant horizon of our round Earth; the rarely grasped feeling of right here right now, being heart thumping alive and experiencing the truly incredible flooded every cell of my body… the privilege to be able to witness this daily phenomenon from this vantage point hit me like a sledge-hammer but I only just managed to lift my camera from within my down suit and take one lousy photo. We reached the south summit and immediately climbed further up the ridge beyond to join another que forming at the Hillary step. This year if I’d been cheeky and 5000 meters lower I would have thought about skiing this formidable obstacle; myth had been reduced to a low angled snowy ramp which still some folk above found hard to surmount. After this getting to the top of the world was just formality; follow the ridge and join the party of people standing on top. I located Jo, we hugged and I managed to retain enough composure to take a few images and shoot some film. After a selfie or two, with and without my oxygen mask, we turned our backs on this elusive place to swim against the current of humanity still struggling up to fulfil their own dreams and realise the power each of us have within if only we put our minds to something.By-note: If this day had been a boxing match between humans and the mountain then we would have walked away as winners. However the mountain did win some rounds and as the sun sets now 5 climbers would have lost their lives and one Sherpa would tragically lose his on nearby Lhotse, 30 more folks were to pay for their experience of a life-time with loss/damage of digits due to frostbite and in no other time in the mountains history would choppers extract casualties so often from so high on the peak.

A year of records and again a reminder that Hillary’s words of conquering nothing but ourselves ringing truer than ever.