Outside the tent a camel saunters by inspecting the hot and tired residents as it passes the open canvas door. The camel nicknamed simply 'Naughty Camel' has been walking through the desert for the last 4 days, along with the inhabitants of the tent, and tomorrow is the big day! Labidia a 550m dune, one of the highest in Africa and dominating the surrounding area, looms up on the horizon!

I knew things would go well when upon turning up at the airport, the team were early, smiling and already checking baggage in. What a team they were! 6 folk from Portsmouth area all raising money for the Rachel Griffin Charity. Rachel was either a relative or friend of the guys who tragically died suddenly of cancer in 2012 and in her memory they have been raising money for local charities. The Portsmouth crew were Rebecca, Stacey, Mike, Sean and Iain and Glen whom had been on the amazing Elbrus expedition in August. To top the team off were David, a 360 vet and his friend and virgin adventurer Michael. 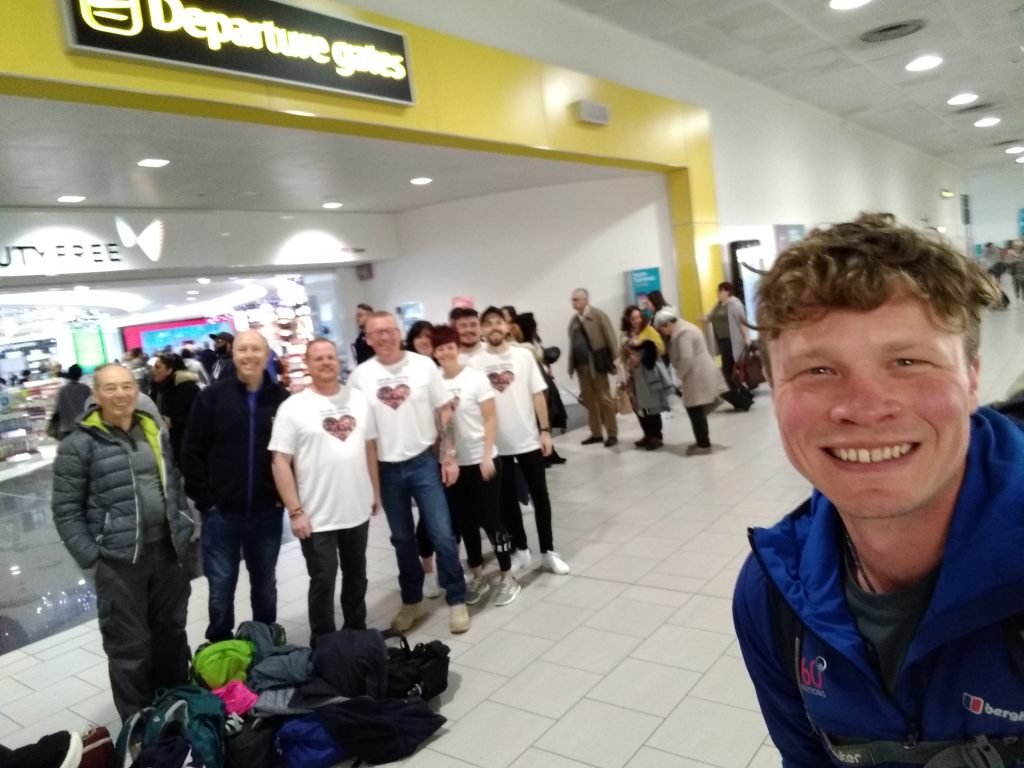 Just 5 hours later and we were a world away from home! Having met Brahim our happy Moroccan Guide we were being whizzed through the wild Marrakesh traffic, over the mountains on ever winding roads and then out into the vast desert. After one final hotel night of luxuries like a shower and bed in Ouarzazate, we continued our epic journey out into the desert. After a few hours driving through spectacular Moroccan scenery we finally reached the literal end of the road and the start of the trek in a dusty village called Mohammed, just in time for lunch. 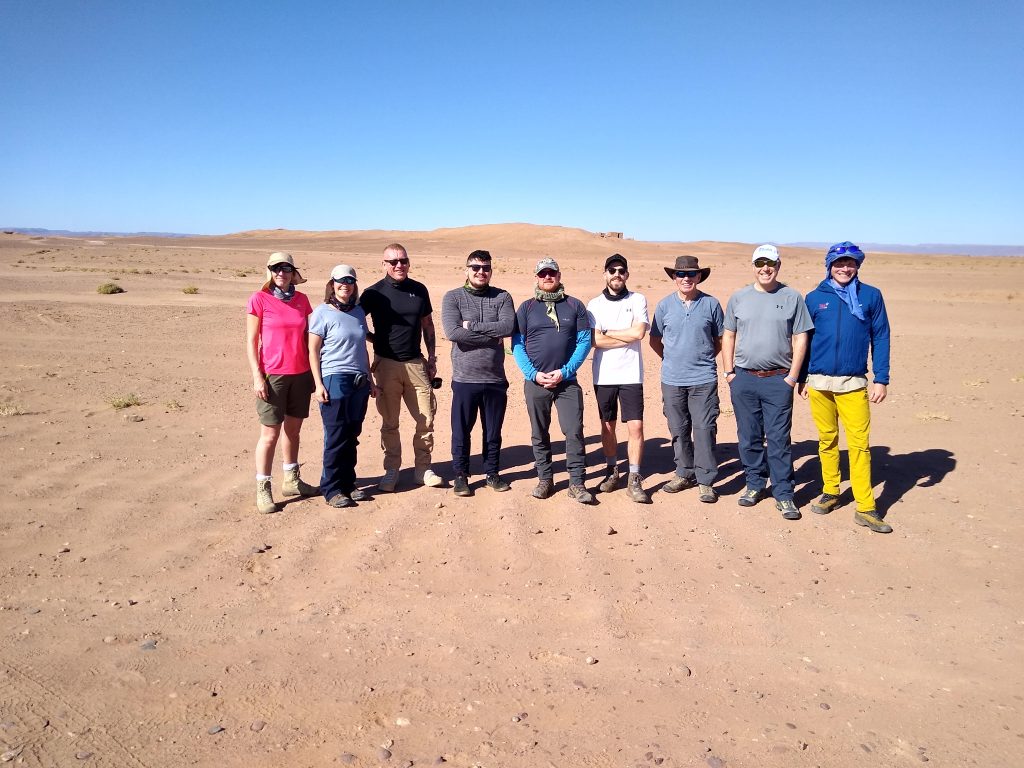 Our first sampling of camp food was well received with a lunch platter including some of Morocco’s superb fresh veg’s and iconic round breads. At this point the team was raring to go and we set off into desert, initially through palm groves and gradually opening out into small dunlings before camp 1. Camp consisted of the all important cook tent, and three large canvas tents one of which doubled as dining tent and main social space. During night this tent also provided a star-lit symphony of snoring audible across the whole Sahara, inhabitants shall remain unnamed. 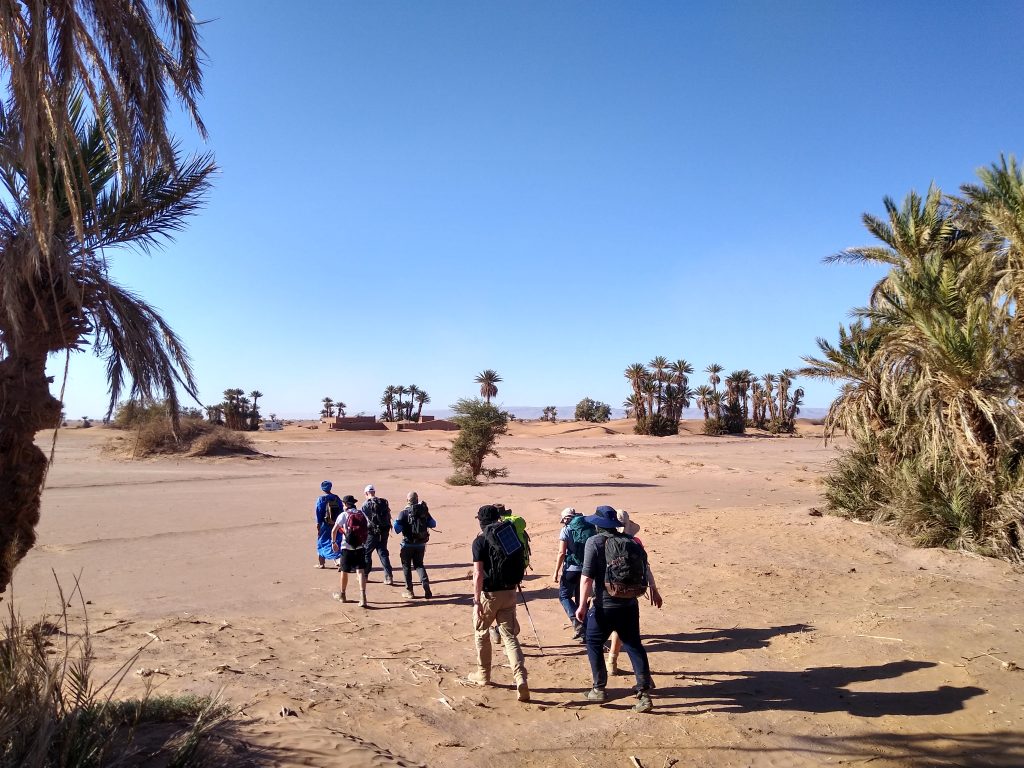 Over the next few days we eased ourselves in to the flow of the expedition, walking would be done over the course of the morning to make use of the cooler temperatures. The scenery was different everyday, as was the weather. Palm groves gave way to dunlings, to open plains, to dry river beds, to gigantic dunes as far as the eye could see! Weather varied from beautiful clear sunny days, dusty wind that made covering up essential, colder cloudy days and even on the penultimate afternoon some rain! The afternoons were given over to siestas, tending to any aches and pains, reflecting, and drinking mint tea. Towards sunset there would be time to explore amongst the vast dunes in the golden light of the afternoon. 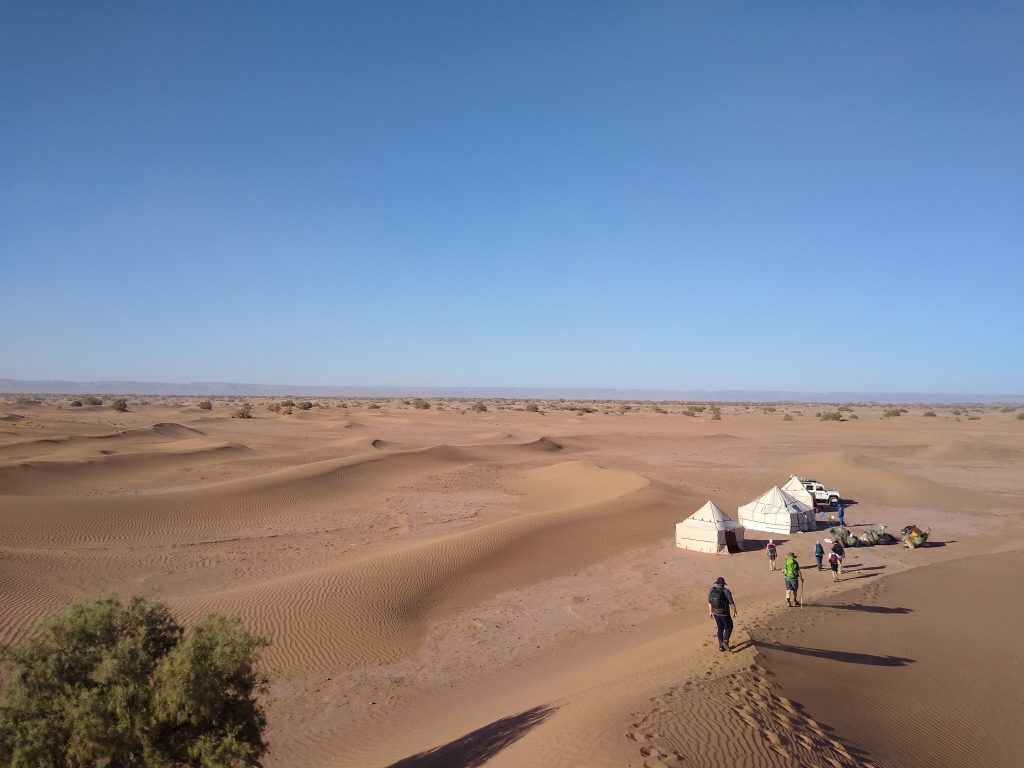 Day 5 brought the big day, we were due to be walking all day through dunes which was a little daunting in the heat but mercifully the day clouded over and gave us cool walking temperatures all day. Everyone had been anticipating Labidia the highest dune all week and as it grew ever closer everyone prepared mentally. After a quick break to eat and drink we went at the climb as a team keeping a good pace and spreading out in a line in true mountaineering fashion.

On reaching the top everyone was jubilant that we had broken the back of the trip and nearly finished the hardest day. Special mention must be given to Sean who had picked up a groin injury as the week had gone on and as a result had to really push himself to reach the top of the dune. Here however the team came into their own as everyone supported and encouraged Sean and each other to reach the top. 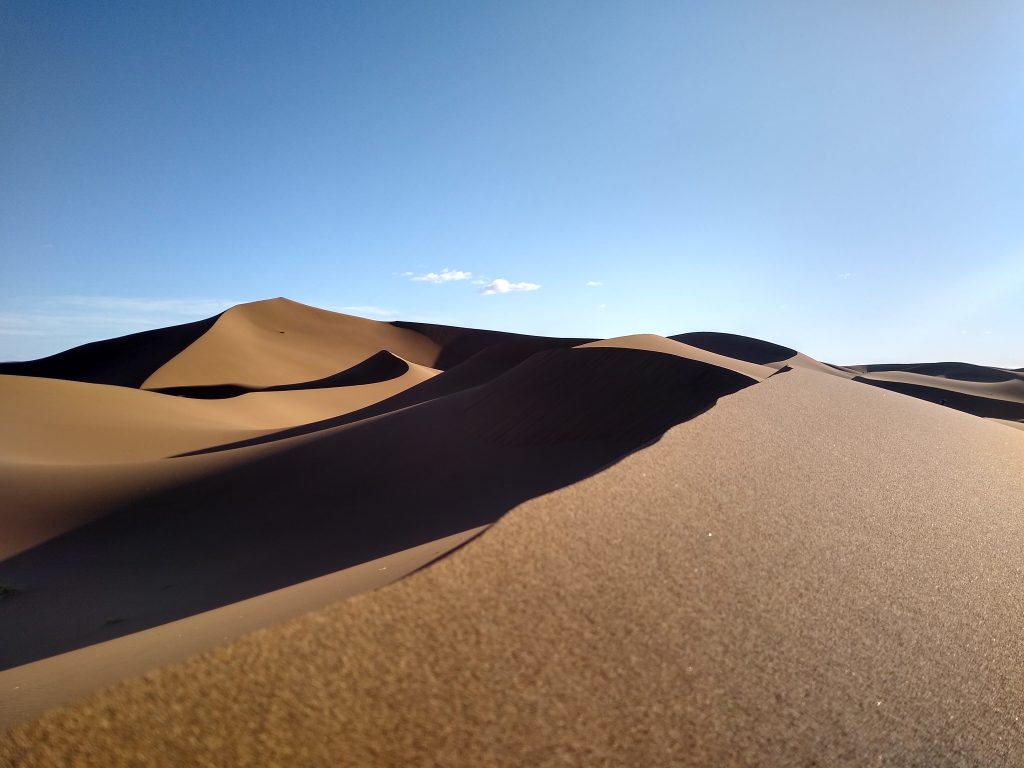 After Labidia one full trek remained, during which we all received a soaking from the rain followed by a very early dawn hike to finish the trek off. 115Km done in great adventuring form! 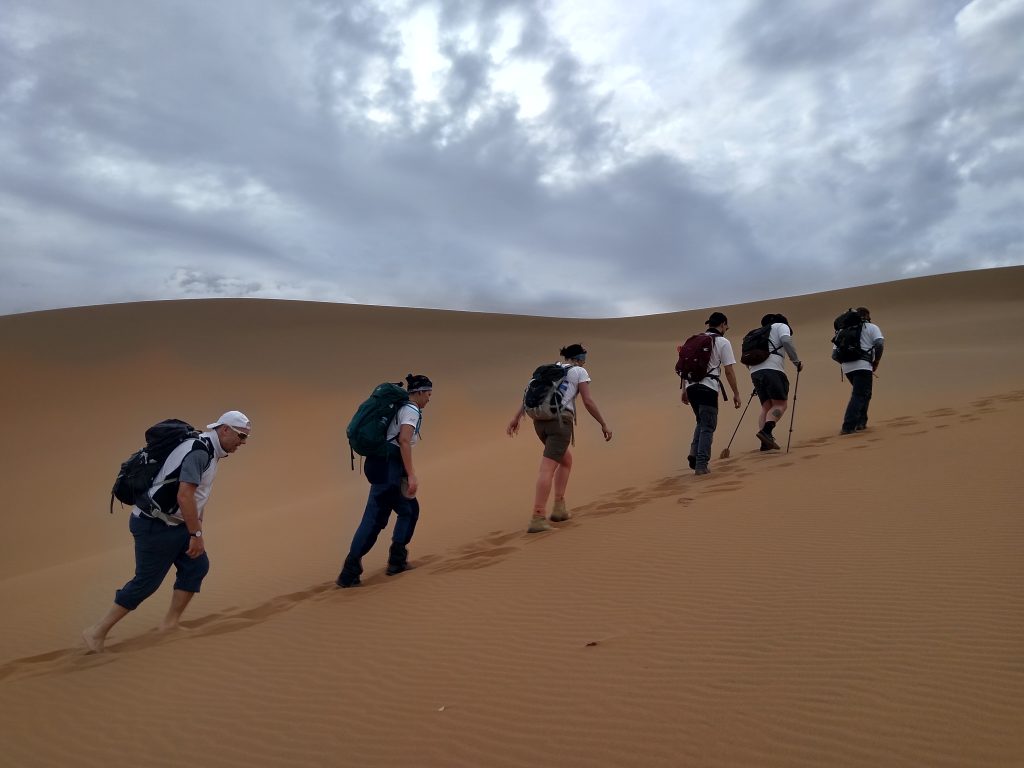 All that then remained was the epic journey back to Marrakech! The journey truly brought home just how remote we had been during our adventure, driving through the vast desert framed by mountains which we then had to traverse. The initial 4×4 section was also made even more exciting by the recent rains, meaning the drivers had to work extra hard getting us through the already difficult tracks. 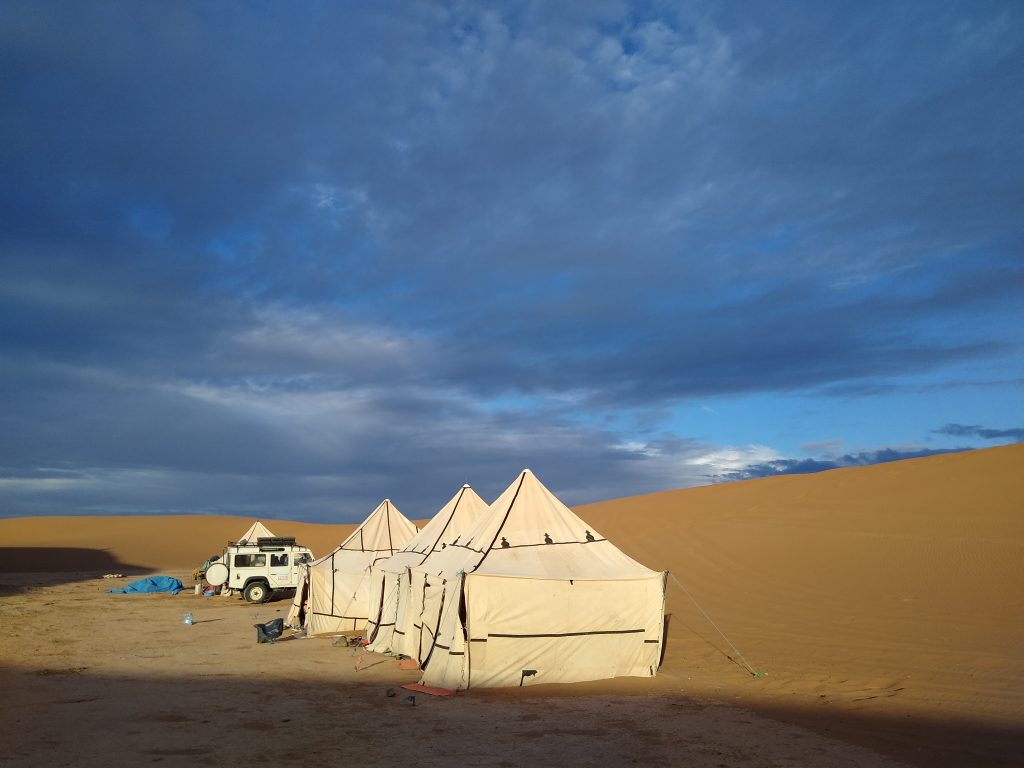 Once back in Marrakech we had a much needed shower before heading to the wonderful Maison Arabe to celebrate a brilliant challenge well done and all the shared highs, minimal lows, laughs, memories and new friends! The last day also happened to be my 30th Birthday and I couldn’t have imagined a better way to celebrate it and being with such brilliant folk made it all the better. 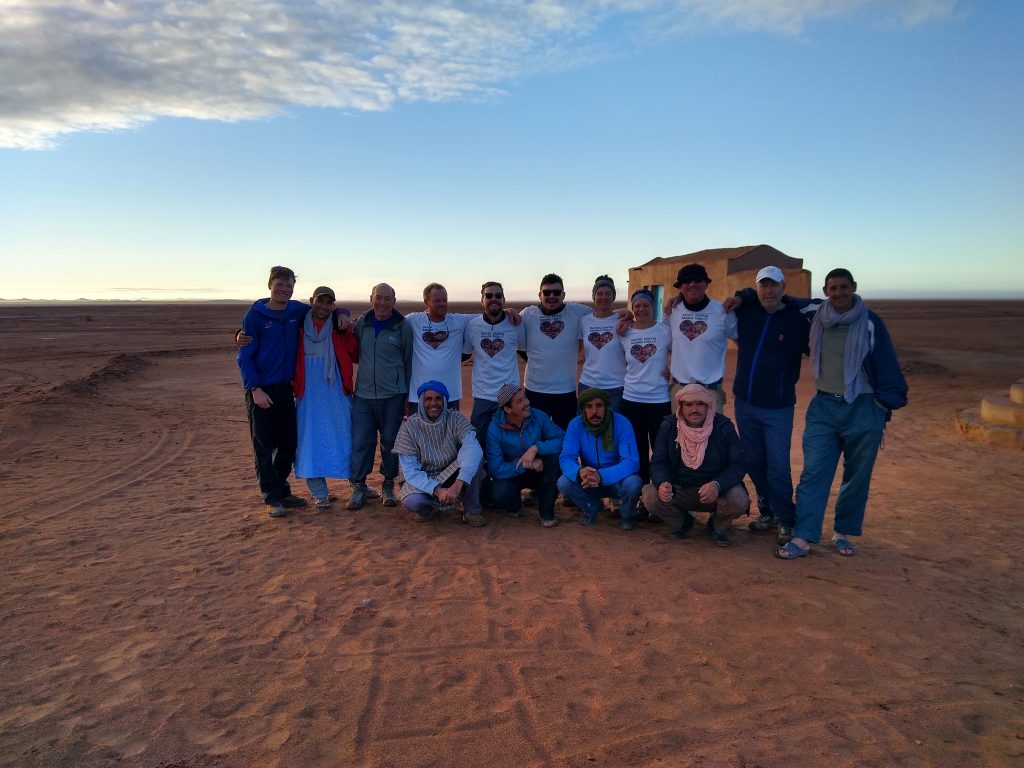 What a stunning place. Thank you Ben for capturing these incredible images and WELL DONE TEAM!

Click here for more amazing photos from Ben, Sahara trip info and how to book.

Did you know we do monthly payment plans? Drop us an email for details.