Yak steak, beer and a trek for a reason

Carl Bevan’s account of Tesco’s trek to Everest Base Camp in aid of Cancer Research UK.

In March 2012 I was drinking a bottle of Kilimanjaro lager with Rolfe having climbed the Machame route up Kili when I asked, “what should I do next?” “Easy,” replied Rolfe, “that will be the Himalayas!”

On my return to work, Cancer Research UK had been confirmed as our new charity of the year, quite timely considering I lost a great friend in January 2012 to cancer. That was that! A few of the others who had been to Africa also enjoyed it so much that they were itching to do something else.Best get back in touch with 360!

After considering a number of possibilities including Annapurna base camp and Mera Peak I decided that I would probably get the most interest and money raised by choosing Everest base camp and Kala Patthar. After a few weeks negotiating with Cancer Research (they had already planned a trip to Morocco and were not sure about putting on another trip!)I got the sign off that I was looking for and the poster’s went out to all UK Tesco staff.

If I was honest I thought I would get around 20 people. I was wrong! We had over 60 people express an interest and eventually 30 people from across the UK boarded the flight to Delhi having raised over £150,000 in the most creative ways possible. 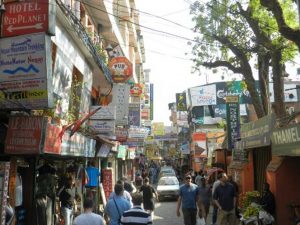 The busy streets of Kathmandu.

On March 14th after a few beers to calm the long haul flight nerves the team, along with Marco and Emily from 360, boarded the overnight flight to Delhi. Rolfe  obviously felt that Jet Airways was not posh enough for him so he was already en route with Etihad!We arrived tired but excited after a connecting flight to Kathmandu, settled into the beautiful garden of the infamous Kathmandu Guest House and tucked into some cold beer ahead of a brief from  Rolfe about the days ahead.

It was an interesting night and whilst the 5 o’clock start time in the morning should have acted as a late night deterrent the group meal of yak steak and the attractions of downtown Thamel were far too much! Alcohol and a lack of sleep would numb the worry of the flight to Lukla which had been the topic of conversation and excessive YouTube clip watching for months!

5 o’clock quickly came round though and we headed back to Kathmandu airport and waited for the nod to board the Tara Airways (nope I hadn’t heard of them either!) aircraft to the world’s most dangerous airport! To be fair the flight was magnificent , proper flying, lots of noise and the best views of the Himalayas in the world! The nerves had gone and were replaced with huge excitement as the mountain’s stood high above the cloud’s and were lying in wait for us to explore! A brilliant landing on the steepest and shortest runway in the world and here we were in Lukla ready to follow our dreams on a trek of a lifetime…By now the team were starting to bond and it was clear that this was going to be immense fun.

A bit of team bonding…

After a few cups of lemon tea we set off to our first night in a tea house in the village of Solukhumu, a gentle 4 hour walk which, much to our surprise,was mainly downhill! We were soon getting to grips with the prayer wheels and flags and sampled our first Himalayan bridges which amusingly put the fear of God into a few of the group!

After a few beers in the Reggae (well it was Saturday night) Bar we had our first night in a tea house. All was good until we heard the scampering of rats on the roof! A sleepless night! But the next day was business as usual as we walked to Namche Bazaar. It was a fantastic day walking through mainly forest alongside the river. The last two hours were up the aptly named “bastard hill” – made slightly more pleasant by the beautiful snow that made the scenery even more spectacular.
At Namche the tea house was excellent and we had a great time at several bars. The team was bonding well and were also enjoying some retail therapy. Namche Bazaar, the Sherpa capital is a special place and one that we all hugely enjoyed! Free Wi-Fi and access to facebook went down very well!

Day 4 was a chance to acclimatise and a pleasant day up to 4,000 meter’s was rewarded with great views to Ama Dhablam, Nuptse, Lhotse and of course our first view of the mighty Mount Everest.A fun day! 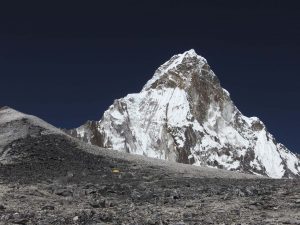 Day 5 took us up to Tangboche which at 3800 meter’s tested us as we reached the Khumbu valley for the first time.This was the first hard days walking with a long slog up to the monastery. Again the views were great and another great days walking through the forest and along the valley floor.

Day 6 saw us take in very different scenery and it was more like Andalucía with the forest being replaced by an arid landscape. The effects of altitude were starting to hit home and paracetamol was being consumed like sweets! However the food was still better than we could have dreamt of and plateful’s of pasta, rice and chips were being demolished helped down with a little bit of local chilli sauce!!

Day 7 was another acclimatisation day with a circular walk that took us up to 4650 meters and back to Dingboche. The weather was cloudy and we had more snow which stopped us getting to 5000 meter’s. It doesn’t matter how long you are here for, you can’t take your eyes of the mountain’s above you. I think I am in love with Ama Dablam, it looks impossible but it is truly beautiful!

Day 8 was the hardest day to date with a long slog up to Lobuche. There had been quite a lot of snow over night and we had a few tricky paths to negotiate. As ever the scenery was breathtaking and I spent far too much time staring at the mountains rather than watching where I was going, rude not too! 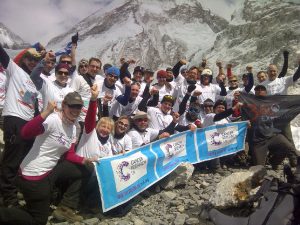 Day 9 The big day! Today all 30 of the team slogged it to Everest Base Camp. I grew up reading about Chris Bonington’s and Doug Scott’s trips to the Himalaya and was overcome with emotion when I made it to base camp. It is a soulless unforgiving place. All I could think of was how the hell do these guy’s spend weeks here. Tough people and my respect for any climber who makes it to the top could not be higher. I was not sure that seeing Everest would make me want to come back one day and get to the roof of the world. Seeing it in the flesh I have realised that I am far too much of a coward for that. I was at peace with reaching base camp – my destiny! A number of the group headed into the glacier and came back full of enthusiasm and intrigue with this magical natural phenomena. I should have gone but all I could do was think of my friend – the reason I was here. We headed back to Gorak Shep where we stayed for the night ahead of our 2nd objective, Kala Patthar and the magical views to Everest and the surrounding giants! 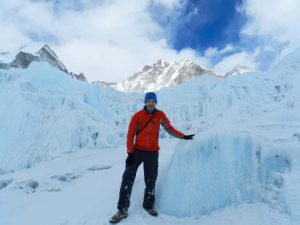 Day 10 Whilst all 30 of us got to base camp the night at 5190 meter’s took its toll and 8 of the group decided that Kala Patthar was a walk too far! The rest of the group very slowly made it to Kala Patthar and were rewarded for their efforts with stunning views.

We spent the next 4 days retracing our steps and morale was high at the prospect of reduced altitude effects and the knowledge that beer was forthcoming!I think we had forgotten how demanding some parts of the walk were as I made a note in my diary that the day back from Pangboche to Namche Bazarr was “the hardest day of the trek!”. Thank god for yak steak and the Irish Bar! We had a great night celebrating and I have great memories of singing Mumford Sons at full blast and playing countless games of pool! Namche Bazarr – awesome place!!

Yak accompanied by cold beer – the perfect antidote to a hard day trekking!

We enjoyed ourselves far too much again in Lukla and then had two brilliant days in Kathmandu with a celebratory 9 course meal in a luxury hotel in fancy dress!
I can honestly say on reflection that the whole trip was immense from start to finish and I would go back tomorrow! The food and accommodation was way above what I would have expected and the memories will last forever.

To be in the world’s greatest mountains has been a dream for as long as I can remember and the whole experience was magnificent.
A massive thank you to all involved at 360 including the Nepalese support team! A trip of a lifetime!

Time to start planning the next one! That will be back to Africa and Mount Kenya!