Climbing Lobuche; with students and dogs

I looked out of the tent to check if the weather had changed its mind and gone back to being cheerful. It hadn’t; thick snow-flakes were being blasted left and right by gusts of wind unable to settle on a straight course… I knew that soon I’d have to leave my warm sleeping bags and go out to see if the team were ok; I still hadn’t checked their kit and needed to do so before we set off early the next morning to climb to the summit. I began the laborious process of getting dressed for the cold. First I slip on my thick over-trousers, followed by a down jacket, beanie and plastics. If experience has taught me anything it was that even a simple kit inspection with teenagers would take a very long time. It was a pleasant surprise that all 4 tents were occupied by the next generation of eager beavers mountain climbers. Literally everyone was frothing at the bit to get going; crampons had been fitted to plastics, cow-tail slings and jumars measured to the correct length and attached to harnesses, everyone had sorted their head-torches with fresh batteries and organised their layering system for the pre-dawn climb.  Efficiency drummed in by building up to the Duke of Edinburgh’s Gold Award.  Brief and kit check over I slink back into my tent. Time for some shut eye before we set of for the summit of this truly spectacular peak. 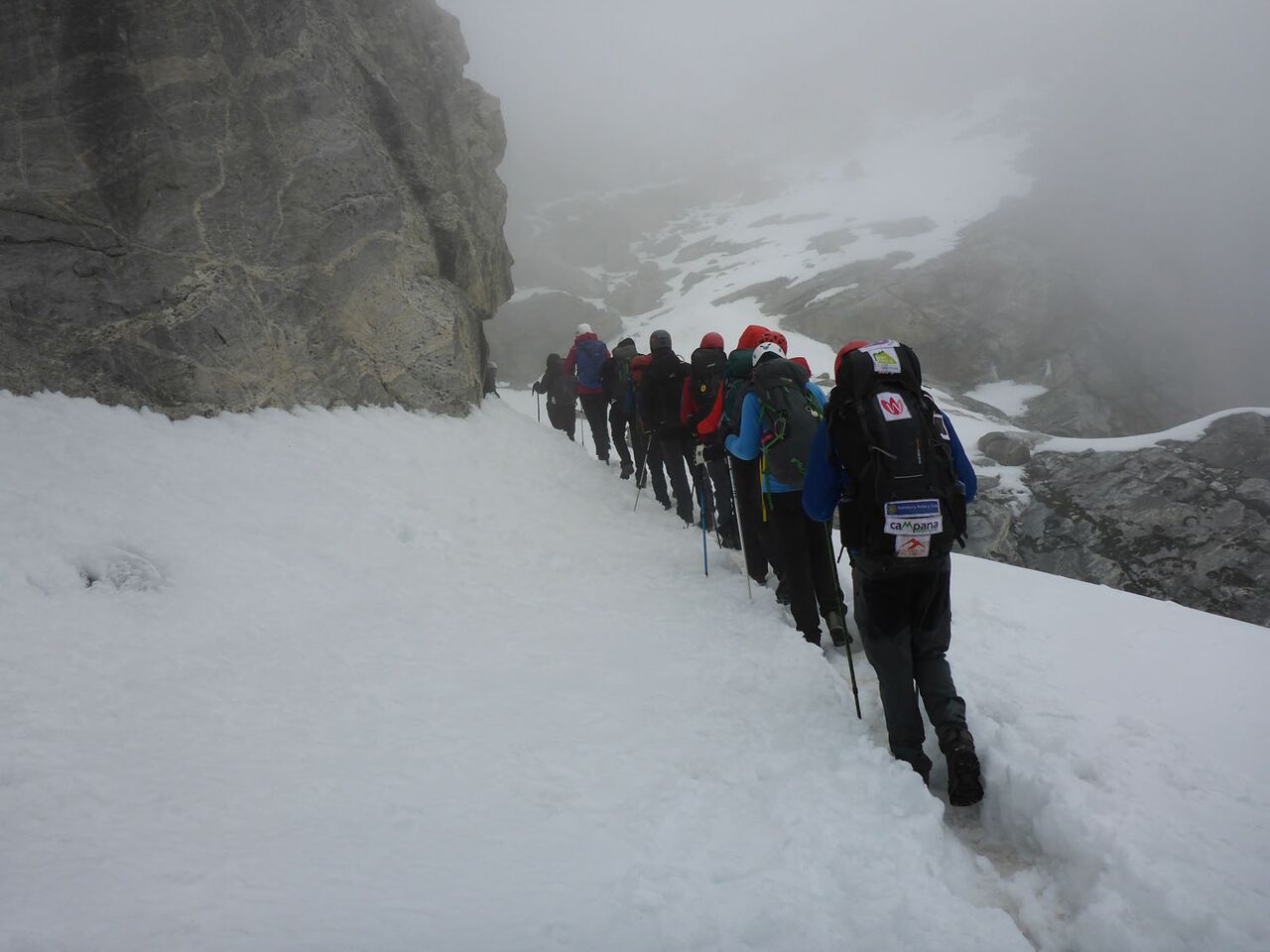 The early morning wake up from my perpetually cheerful Sherpa crew reveals that the team are teenagers after all; half of them are in that strange world of not being awake or asleep and it takes some organising before we are ready to climb. As the team gets ready I notice, on the fringe of the camp, a small mound of snow like a tiny volcano blowing the occasional puff of vapour.  Something alive is buried here. A closer look reveals the tip of a nose; black dog nostrils blowing steam in the frigid air. With all the noise and activity the mound cracks open and out pops the nostrils owner; a big shaggy Tibetan sheep dog. It is ready to climb before any of us.

As we get started old injuries begin to plague 2 of my team and they descend back to camp. Perhaps just as well as the difficult stuff is ahead and getting folk down from higher up is always more problematic. It’s great to have young Sherpa power on board and the willingness of these guys to (perpetually cheerfully) assist in bringing someone down and then bounce straight back up is reassuring when you have a big team. True Mountain Yo-yo’s.

It isn’t long before the sun rises and the terrain gets more interesting; Snow slopes are giving way to ever steepening ice. We have only used the rope to navigate through crevasse prone country, but now find it fixed into the steep stuff to allow us to climb more safely. A quick lesson on how to jumar up these ropes is taken on board by everyone. It is a pleasure to be climbing with novices who so readily learn the essential skills. 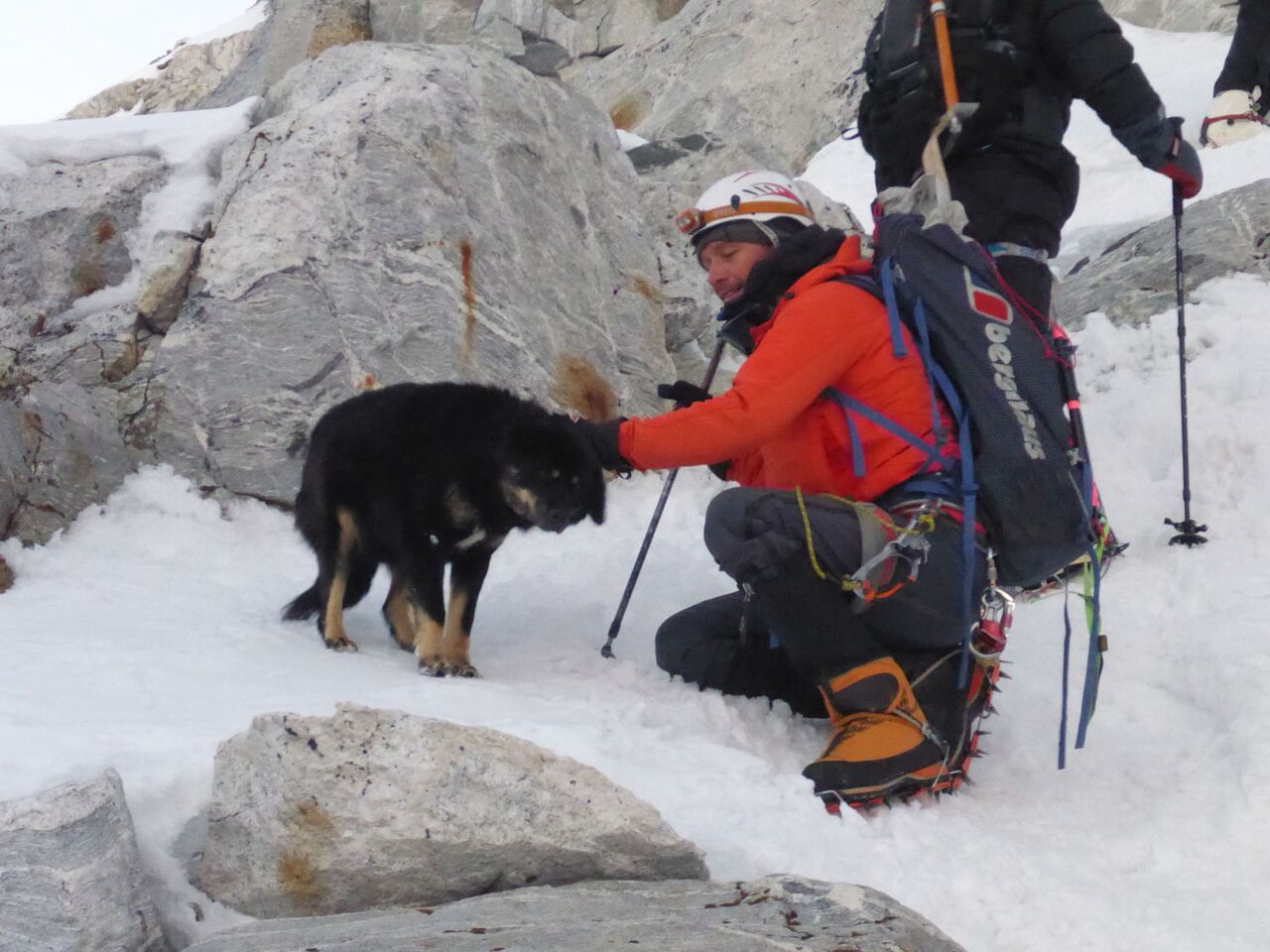 Not taking any notice of my Jumar lessons is the dog. Since camp he has followed us into the sunrise and up the craggy and icy bits above. If what Buddhists believe is true then this dog might well be a re-incarnation of a past climber who suffered some bad Karma. He still has the climbing bug though and judging from his lovely nature is bound to return to a higher plain next time around. It seems that this dog is actually having fun as   he follows us up stuff that is getting steeper by the minute; that or perhaps he is hungry and can smell the snicker bars stashed in the lid of my rucksack.

At this stage there are now 8 of us jugging hard up the fixed line. We appear to have the mountain to ourselves and each is enjoying the expanding vista from this unique corner of the Khumbu. Towering around us are lesser known but no-way less spectacular peaks such as Cholatse and Tawoche with the more famous Ama Dablam behind. The weather is being kind, the terrain is getting steeper by the minute, the views more incredible; this is what Himalayan climbing is all about!

Suddenly disturbing the peace we spot two figures come racing up the lines below us. They are hauling ass.  Soon they catch up with us “ I make climbing record” bellows the first guy, who judging by the flag sewn onto his down jacket is a Russian, and a big one at that. The only hic-cup in his record-breaking attempt is that they are stuck behind us. The shortest of the pair is a Sherpa who begins to un-clip his charge from his cows-tail then reaches around each of us slow moving bumblies to re-clip as they pass. Doing the same with the Russian guy’s Jumar; un-clip, reach around, and re-clip, times eight. Time ticking, tempers flaring.  It takes a while to overtake us and the Russian is blowing steam from his ears at how slow the Sherpa is doing the clipping for him.” I make record!” he reminds the Sherpa and us at the same time. By the time he reaches me I ask him if his Sherpa is making a record too as he is moving along at the same speed.” I make the record” he snorts as he jugs past, the Sherpa glances down and rolls his eyes, a communication that is truly international. I yell up to the Russian that he’ll probably set a much faster record if he were to climb away from the fixed lined; a real climbing record rather than a rope sliding record. 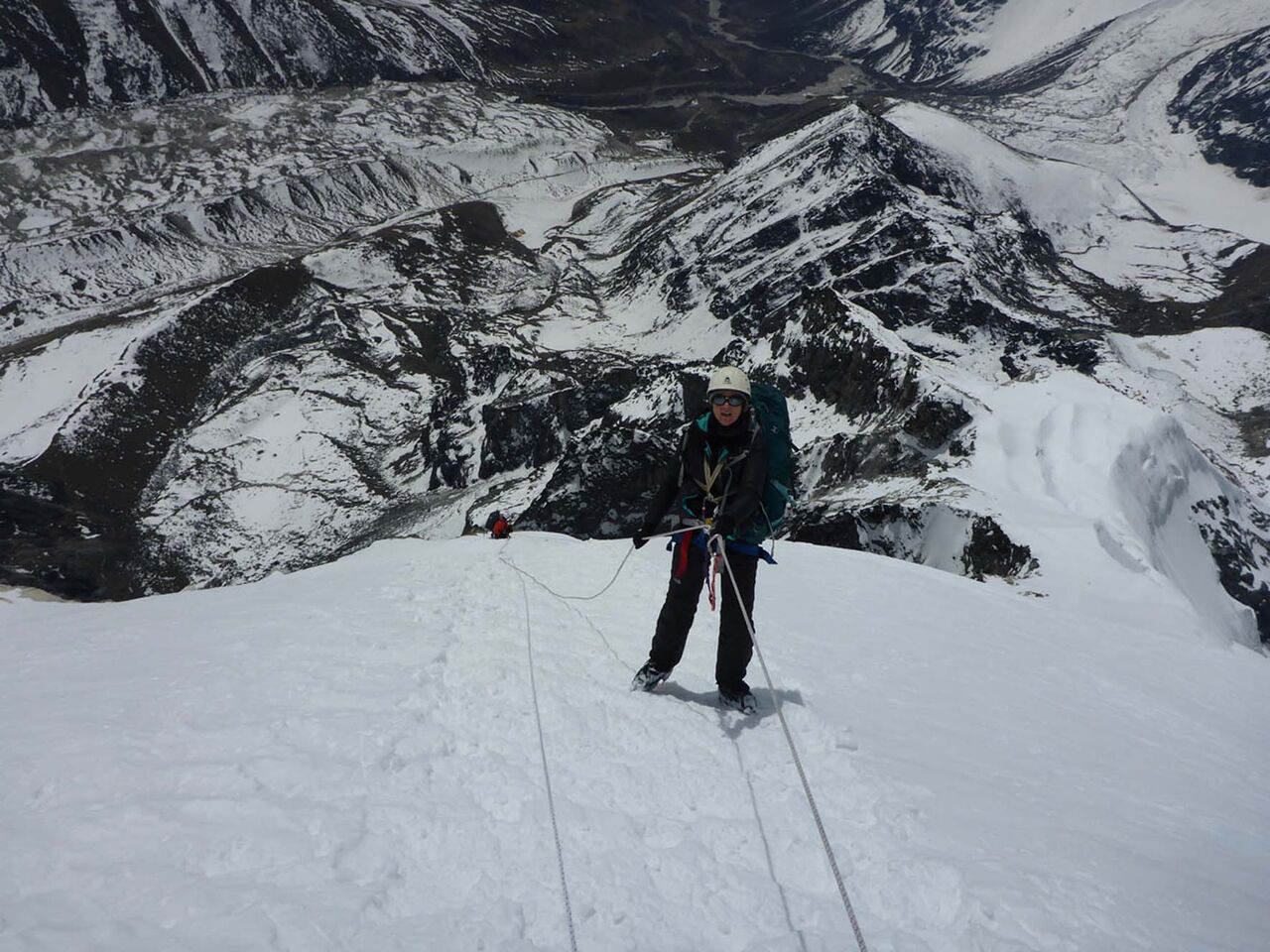 As we approach the final push two climbers appear on the ridge above us. They seem to be heading down. So far the Lobuche climbing etiquette has indicated that one line is used by all climbers for ascend and another for descend; things couldn’t be safer or more practical. But looking up we see that one figure clips into both ropes and doesn’t as much rappel but falls legs first down the rope. 24 sharp bits of steel tied to the legs of a Japanese climber are zooming their way towards us. All of us and particularly me first in line for impalement begin to squawk loudly. We make enough of a noise to make the guy grab the rope and with a glove burning halt comes to a stop only a meter above us.  I hurl a barrage of abuse at him; “where the hell did you learn to climb??” that kind of thing. “I don’t know what you mean, I speak no English…” he replies in perfect English as he re-clips into the correct line and continuous his whizzing kamikaze style descend.

The summit is reached first by Jaz and Dom. Jaz in particular has been having a lot of fun on the expedition. Her exceptional fitness has seen her reach the summit well ahead of most others on the smaller peaks we climbed on the way. Also her willingness to learn what us seasoned guides have to tell her and of course to successfully screen the truth from the bullshit has been impressive. The rest of the team reach the summit in dribs and drabs but all have one thing in common; they are ecstatic to be on top. Mountains teach us that, like in life, it’s easy to turn around when the going gets tough and that extra will power is needed to make that final push for success. None of these kids were going to be the guy who almost made it. I rarely confess to being proud of my clients; most of them are hardened climbers who know the tricks to getting to the top of a tough objective but this group were coming to the mountain not appreciating the nature of the challenge ahead. The fact that they gave their all after a huge day on the hill goes a long way to demonstrating that climbing mountains is not just a physical thing but where mind goes body will follow. I am glad to report that those who stood on the top of Lobuche East that day represent a bright future for our crazy sport. 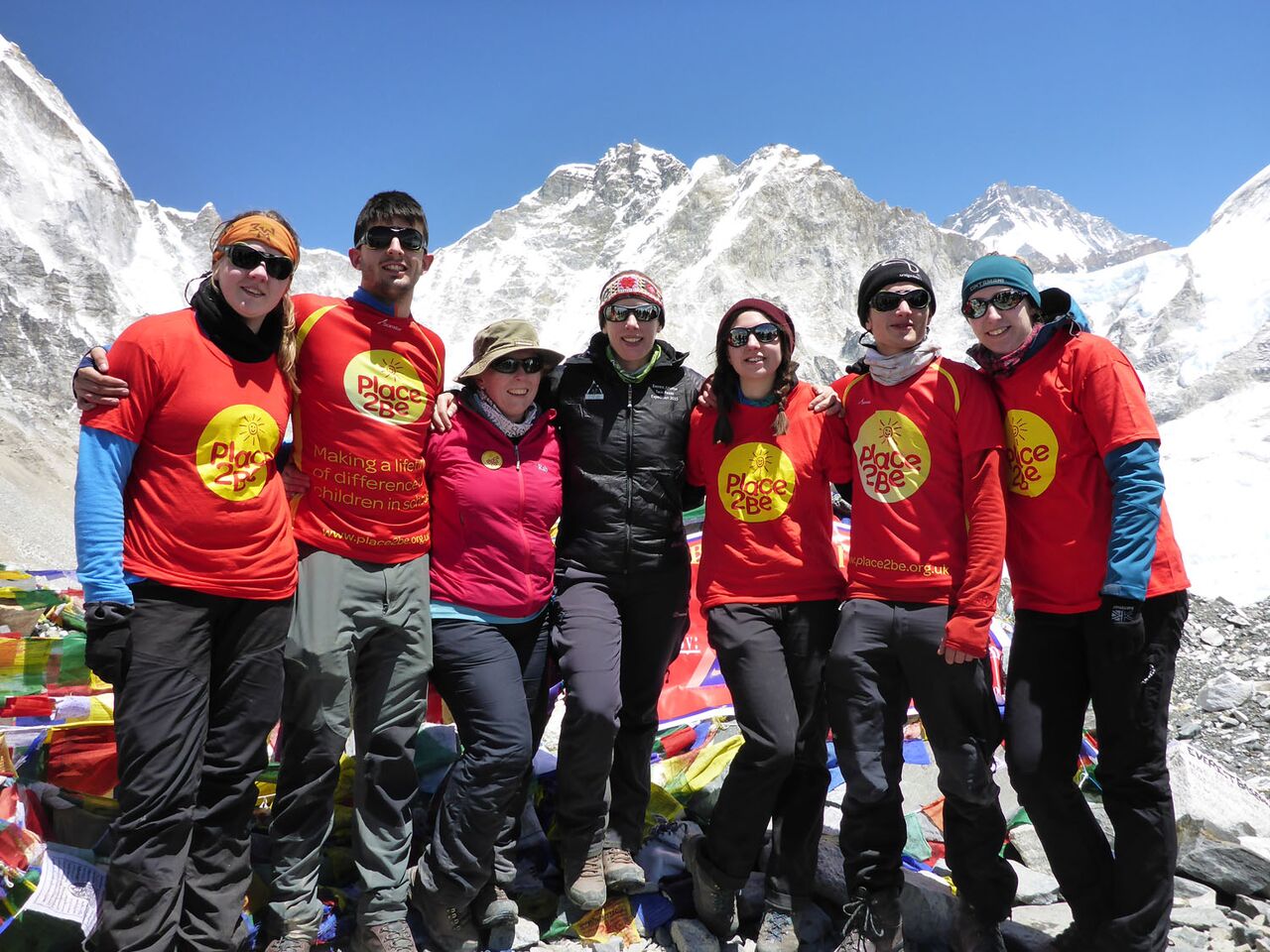