It was perhaps no coincidence that I should be sharing the tent straining to keep purchase at the high camp of Denali with representatives from 4 different continents; this was after all the 4th of the 7 summits which I hoped to climb this year. Representing Asia was the lovely Kam, North America was ably represented by Brian and Europe, begrudgingly, by English Stuart. Me, being the only dude in the tent from south of the border, represented Oceania. 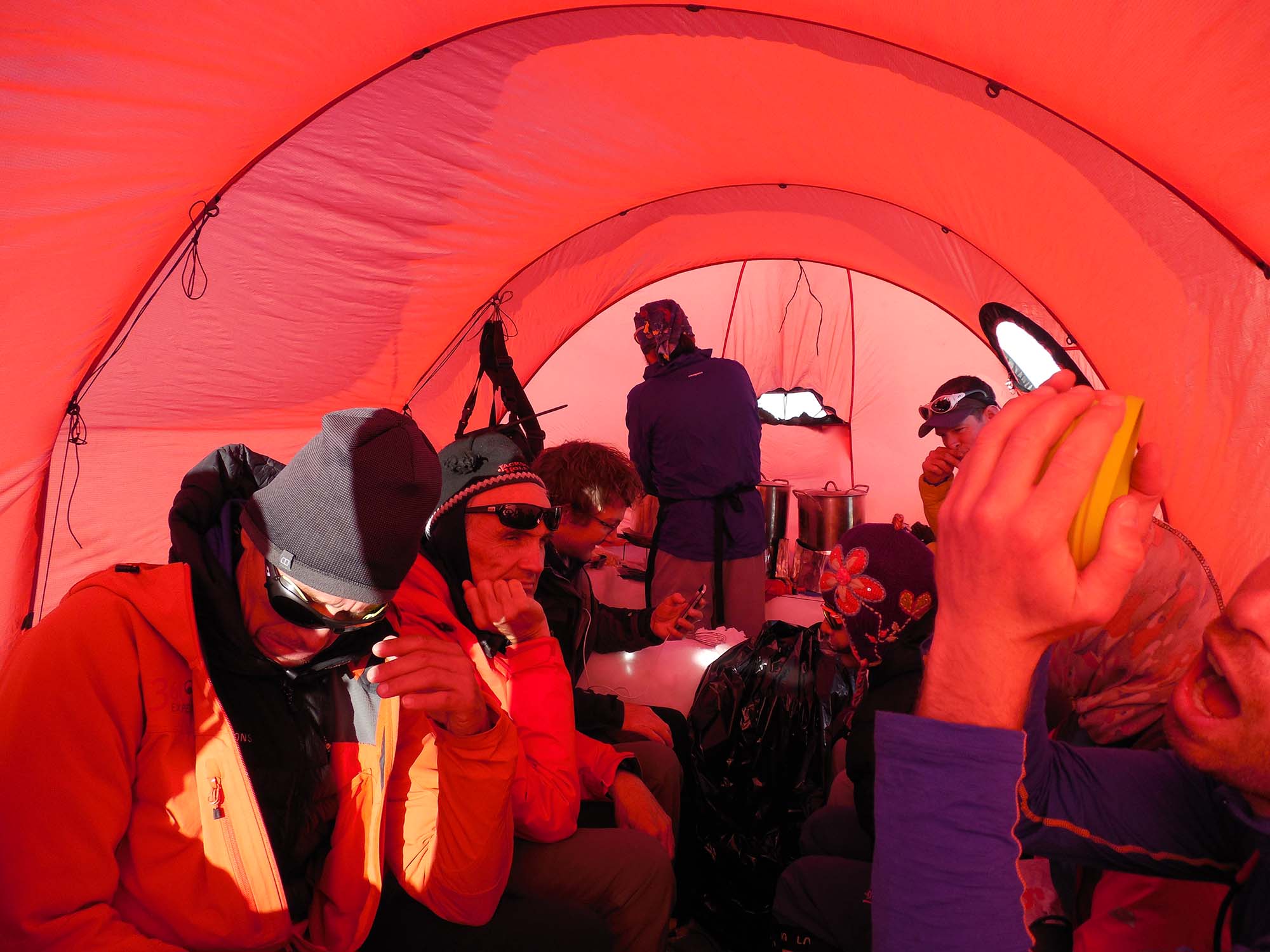 Outside the wind was howling like a werewolf, the tent rattled like an old steam-train and all our sleeping bags and anything hanging up was covered by a thick coat of frost. The temperature would barely creep above -30 today and going outside to do some business would prove to be arduous.

We had arrived here with high hopes, driven upward by a good forecast but halfway up the exposed ridge had come face to face with strong winds and dropping temperatures. Arriving at the high camp we’d felt like snap frozen freezer dwellers and crackled to get the tents up and cut out protective blocks of snow to keep the elements at bay. Finally settled in we’d gotten as comfortable as one can in these places and crossed our fingers for mother nature to chill out a little. I was going to say that the next day dawned with promise but since the sun never sets at this Artic latitude in summer I’ll say that 12 hours later conditions began to improve; the wind stopped its menace and even though the temperatures remained low enough to freeze the balls of a brass monkey, the American guides we were so ably supported by declared that our first summit bid would proceed. 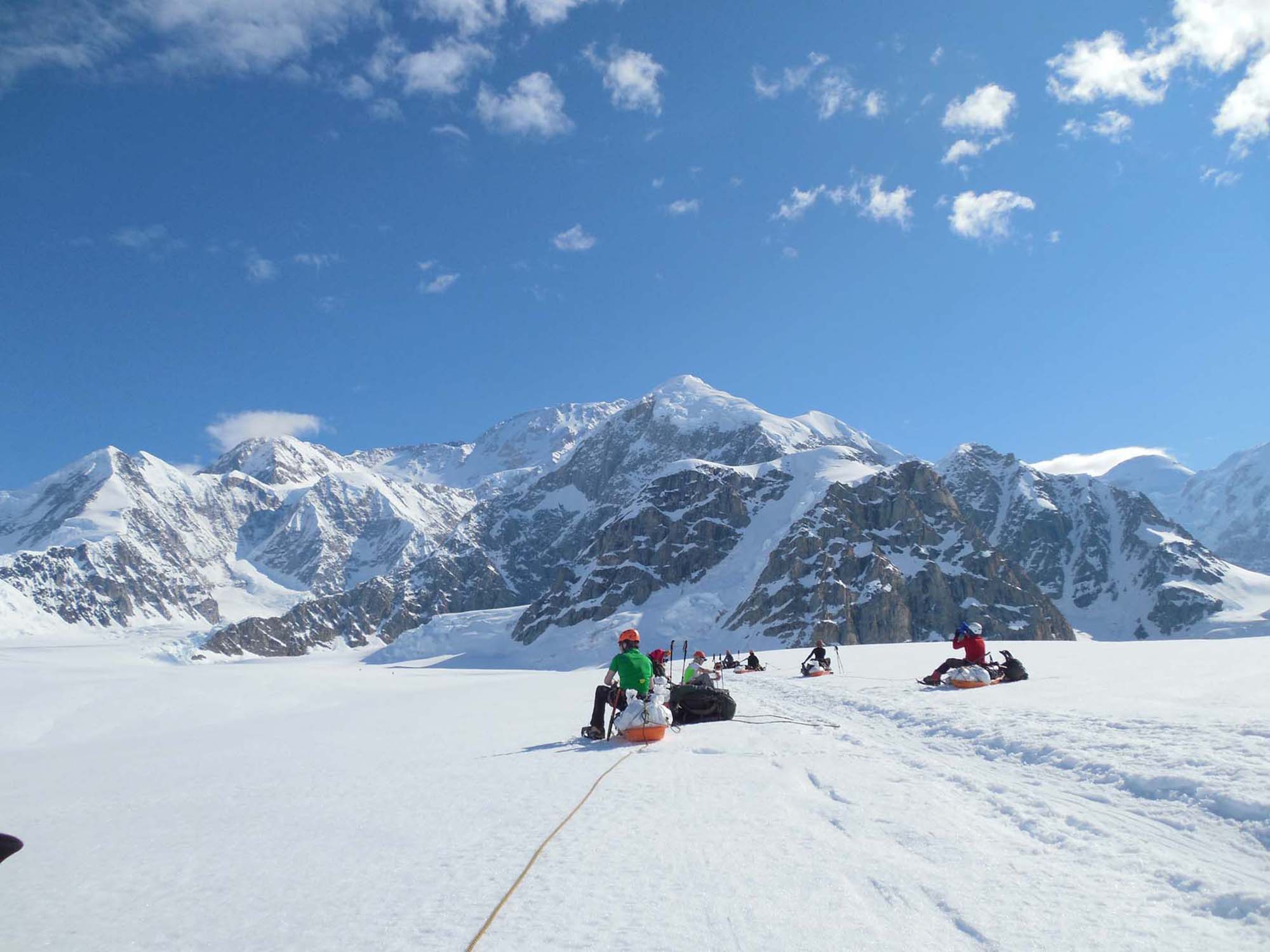 Four people in a tent meant that getting dressed, having breakfast and harnessed all at the same time would be interesting. But eventually, each of us struggled outside the tent and looked up to see the top without the summit plume we had become accustomed to seeing. So far, so good. We roped up into 2 teams; “Team America” sporting an all American flavour and team “Scruffy foreign types” who added another continent, South America to its ranks as leading the rope was Ricardo, a Chilean mountain guide. I took up anchor position and together both ropes set up a long traverse called the “Autobahn”. This section of the route leads to Denali pass and unfortunately is a complete misnomer. We only managed to perform one overtaking manoeuvre; the worlds slowest, around a pair of Brazilians who had failed to acclimatise and were feeling the altitude. However, once up Denali pass the mountain began to extract its due. No such undertaking is completely flawless and Mother Nature always calls the shots. Richard our team’s oldest member was beginning to feel the pace and Brian was beginning to feel the cold. 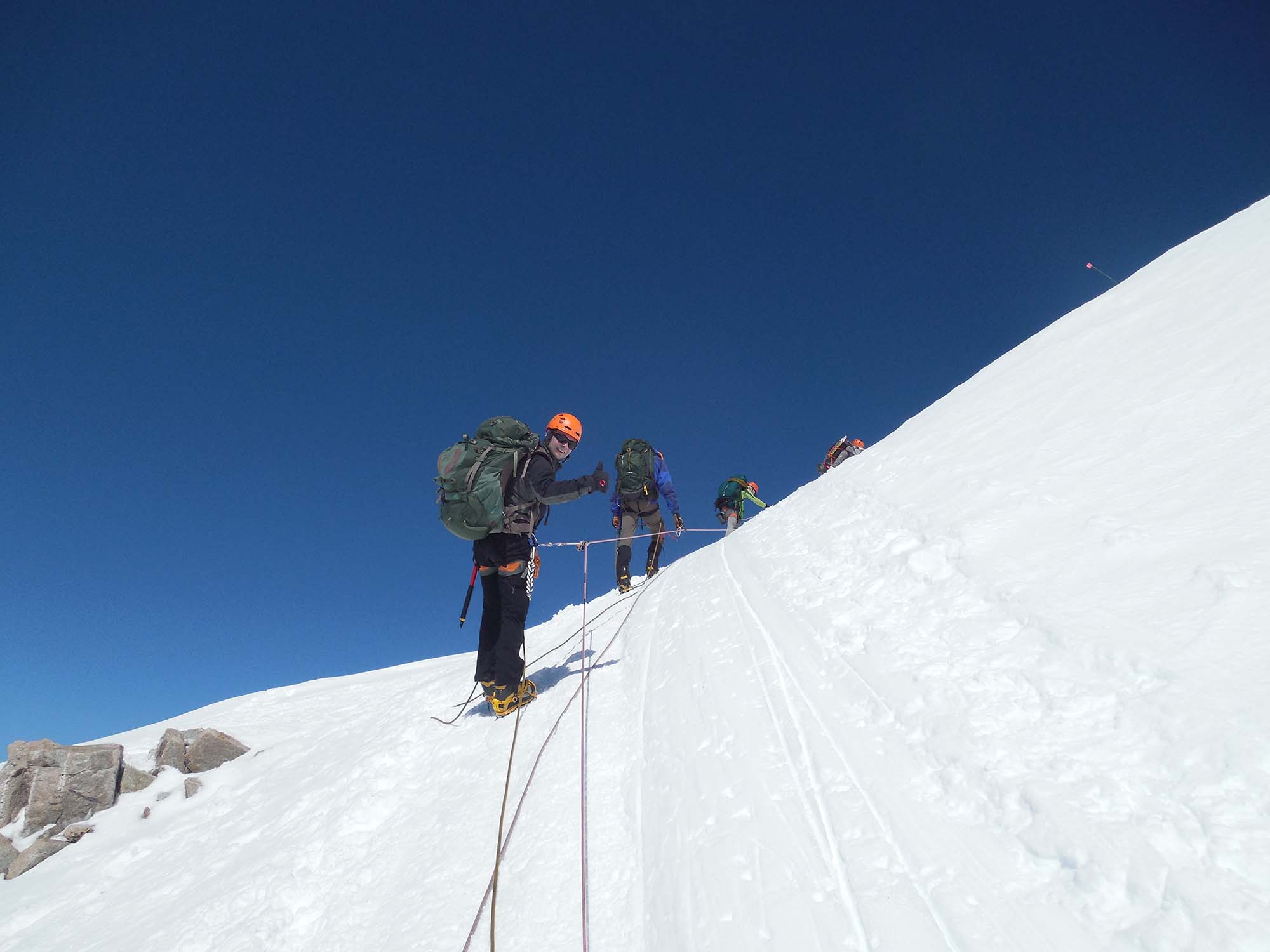 Team America wanted down and accompanied by 2 American guides descended back to the high camp. Left standing was team Scruffy foreigners whose sights were still set on the top of North America’s highest peak. Over the next few hours, conditions began to improve and each of my rope team began to believe that summiting was feasible despite the altitude making its presence felt. Mike the Kiwi, my fellow southerner welcomed it by painting the snow with a multi-coloured yawn. Time to dig deep. The climb passed in a surreal mix of amazing views and the mountain never really making up its mind about the weather; one minute it would be freezing the next it would be warm enough to keep a smile on the face of a Pacific Islander. But eventually, as we climbed higher and higher above the clouds and North America’s finest peaks, each began to hear the summit’s call. We summited as the wind abated and Mount Foraker and Mount Hunter broke through the dense valley clouds. 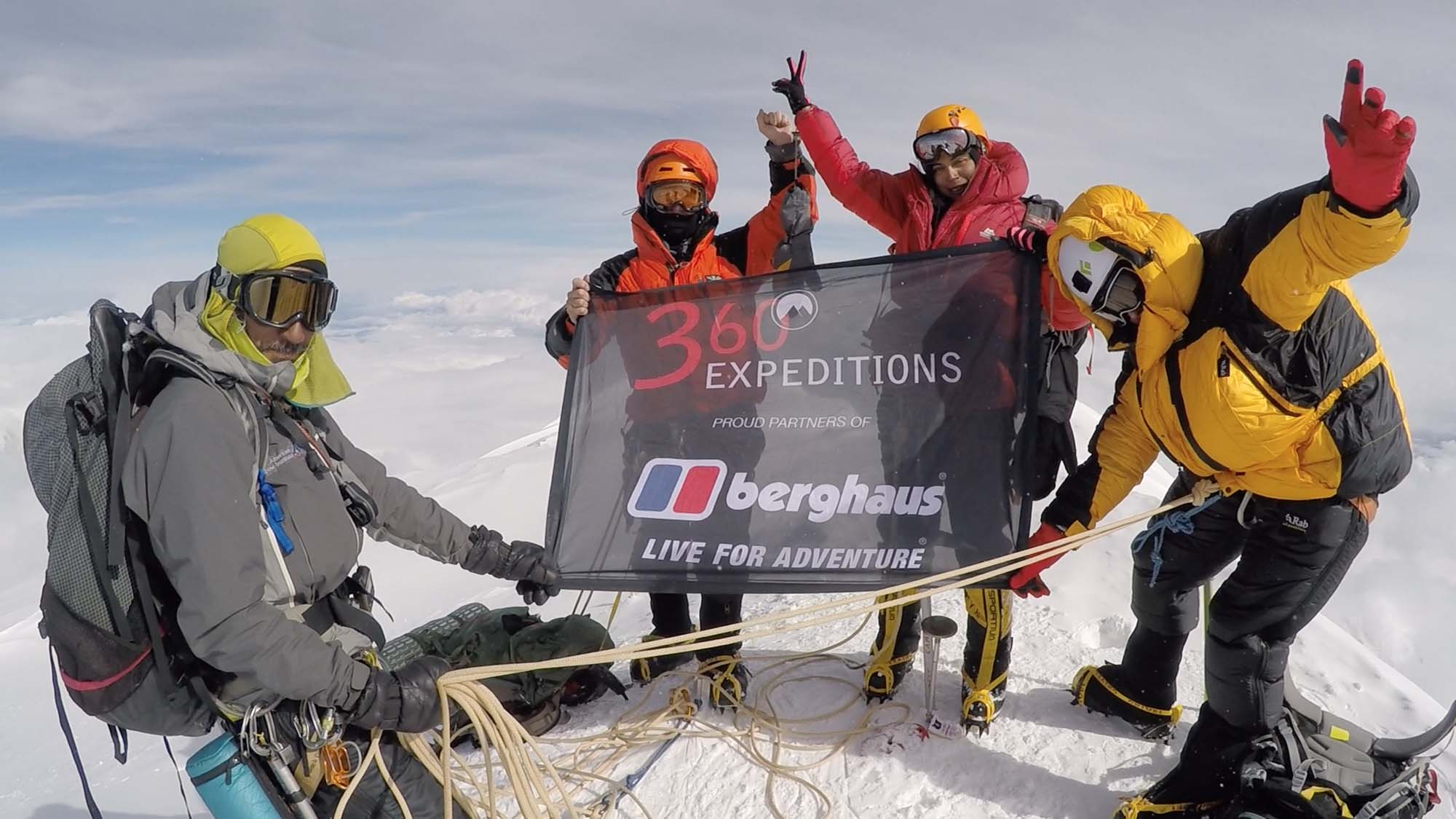 The fairy-tale world of subtle colours and otherworldly peace was broken by jubilant shouts to each other, sponsors and Fulham Football Club. Together this motley bunch of strangers had joined to reach this lofty ideal. Each of us had come a long way to be here and although we arrived separately we descended as a united bunch of friends scheming to climb together in the future.

Of course Kam wasn’t a stranger when we hooked up in Alaska; over the past years, we’d climbed numerous mountains together. This was her fourth of the seven summits. What did impress me about her this time was how seriously she had taken her preparation to get here. Her future holds some seriously big mountain objectives and if the lessons about how to climb a mountain totally without support have agreed with her than the high altitude world will soon meet a force to be reckoned with. 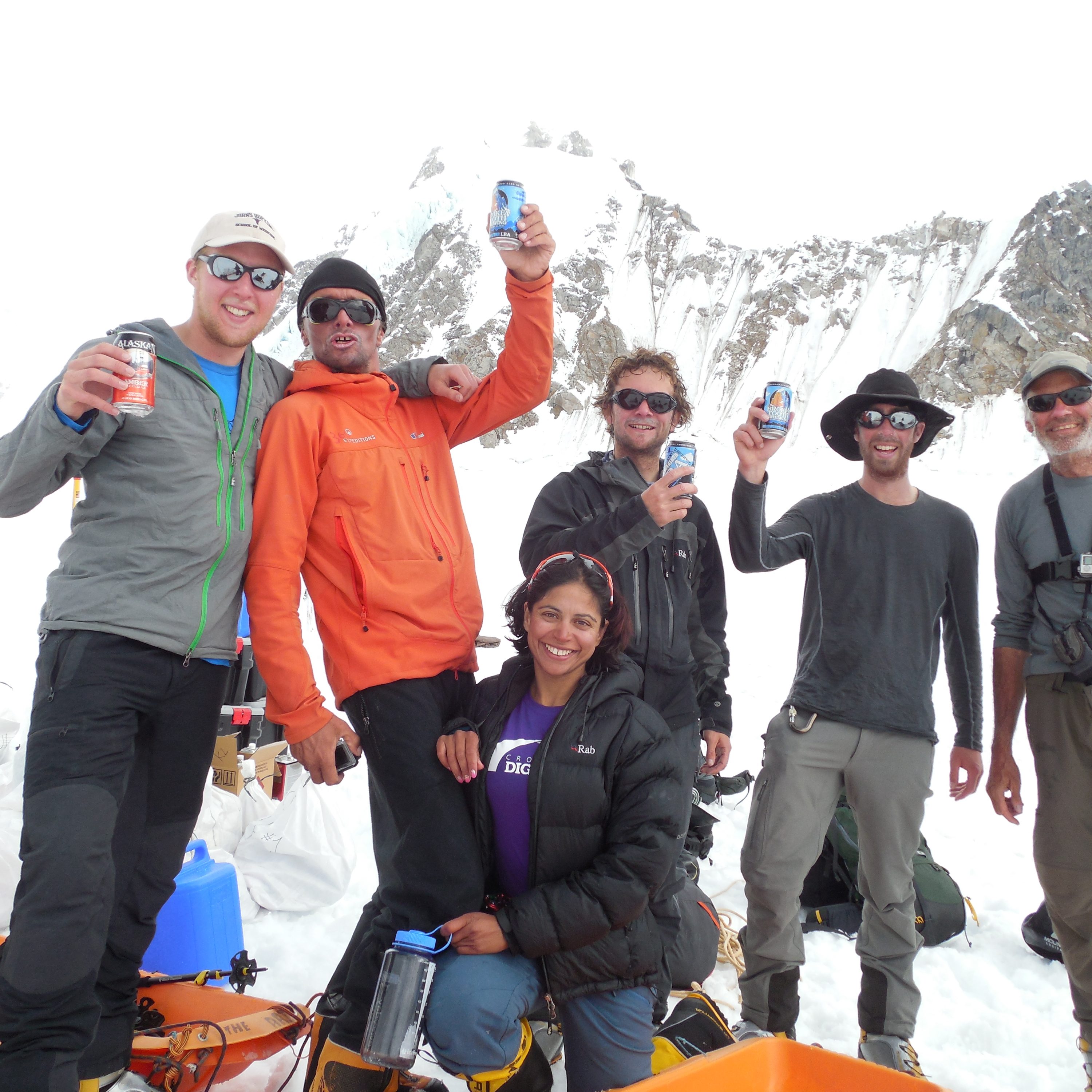