I’m a mountaineer. I climb mountains, love mountains and speak about mountains. People drive me as wild as I do them, because of my adventures, cock-ups and rescues, but I travel to other places too. I’ve bashed through dense jungles, crossed open plains and sailed oceans across the globe. During late 2017 I decided that I needed a change. The year had been a tough one and I was tired. Tired physically, tired mentally and tired emotionally. I needed a break but wasn’t sure what to do. 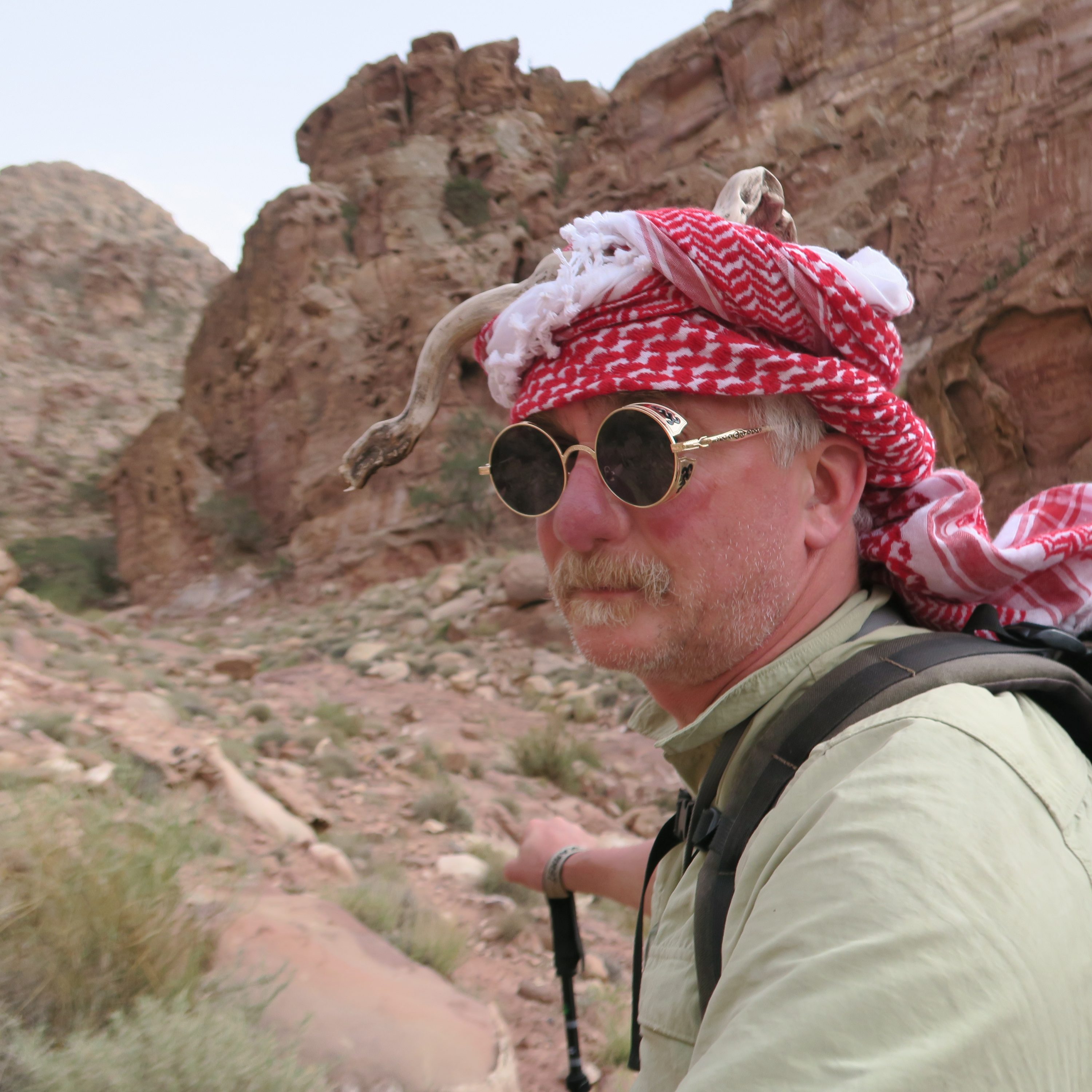 I’d received an invitation to speak at Yestival and took the long drive south in Kara, my 1970’s VW Kamper. I spoke about my adventures on a sunny Sunday morning, taking the p**s out of myself good and proper. I need to blow off some steam and that’s exactly what I did. I had no particular plan, no script and no preconceptions, but as I’ve surrendered to my speaking, I let go. It worked and worked very well. I then met Emma Taylor from the Yestribe who was putting together a trip to cross the Jordanian Desert.

I wrote earlier this year about finding your people or tribe. You find nothing by sitting on your hands, so this seemed an opportunity too good to miss…

Very little excites me any more. Social networking posts screaming ‘X many sleeps until whenever’ frankly irritate me. I adore Christmas, but I don’t need reminding of its date, how many sleeps to go or the tat that western society has attached to it. I adore expeditions but run up to them quietly, rather than banging on the drums. It was therefore that I silently slipped into Heathrow and met the rest of the crew during early May. They were a varied and international bunch, all itching to go. Some were well-traveled, others not as much, but that matters little to me – how they work together is what matters. Group dynamics are more important than personality traits.

I’ve not traveled in a group for a long time. Mountaineering is usually a small affair with close friends, who meet up to face a personal challenge. There may be local support, but that’s it. This was much different and I felt a little overwhelmed at first. I’m never good with names and don’t make conversation easily. Perhaps age is getting the better of me and I’m turning into a grumpy old man who is set in his ways..? 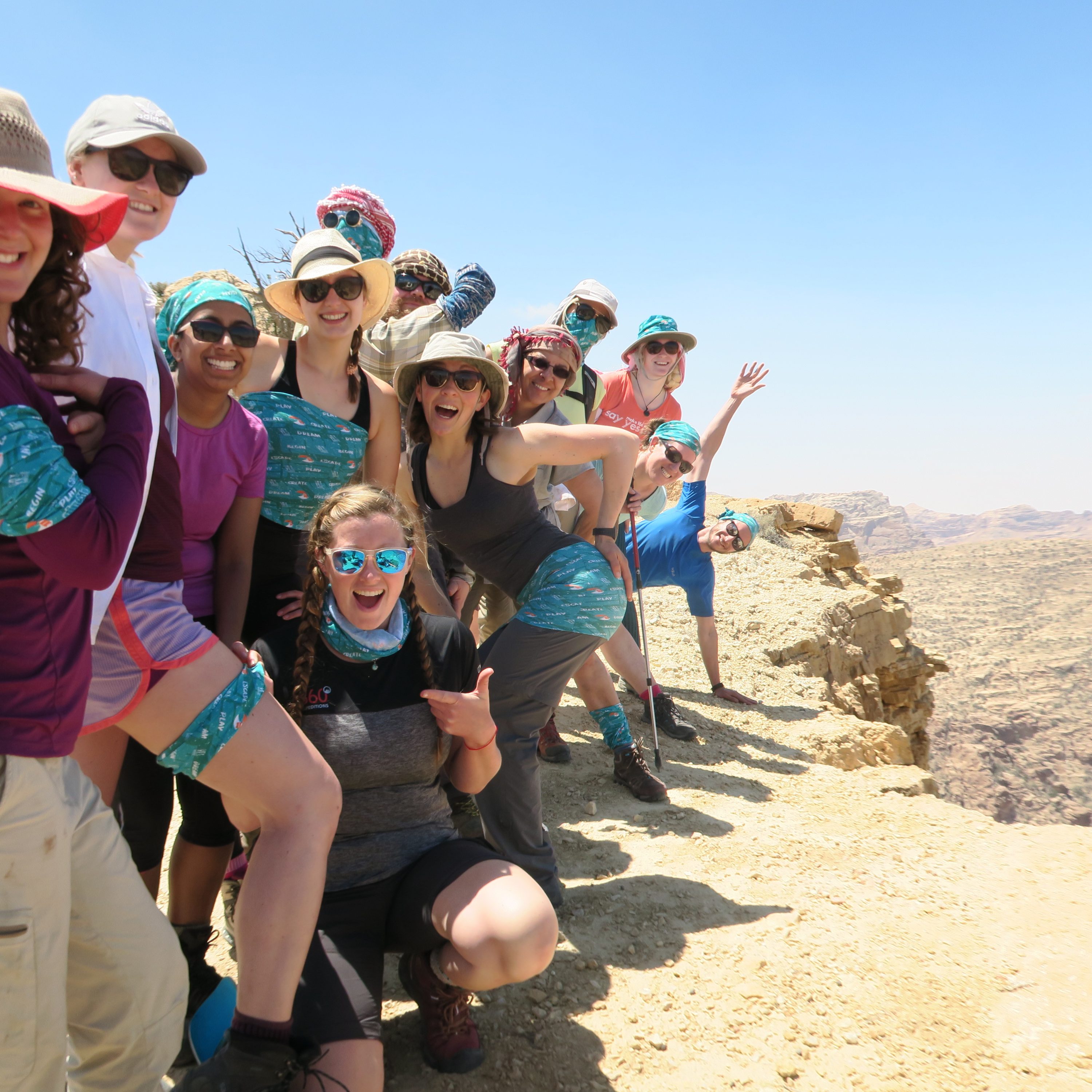 Religion has played a huge part in my life, but I’m no churchgoer as the mountains are my place of prayer. Their drama, peace and purity have always allowed me to pray and reflect upon my life. In my view, God didn’t create us to build boxes of stone, but to find peace within ourselves, wherever that suits. Nature has always inspired me and that’s where I can be quiet and contemplate my life. Saying that there are some wonderful religious sites in Jordan and both Madaba and Mt. Nebo brought me great joy. Their mosaics, icons and history took me back to a more peaceful time where life seemed simpler and slower than today.

The desert called and we entered our first camp after dark. Light flickered from a fire, from where came wonderful Bedouin Tea. Memories of my Grandmother putting the kettle on her coal fire filled my mind, as did the wonderful aroma. The crew was welcoming, and greeted us with a meal, before people began to settle down for the night. I slept under the stars with no fear of snakes and scorpions and was off in seconds. Sleeping outside has always given me the most peaceful slumbers and I regularly find a quiet corner to put my head down. 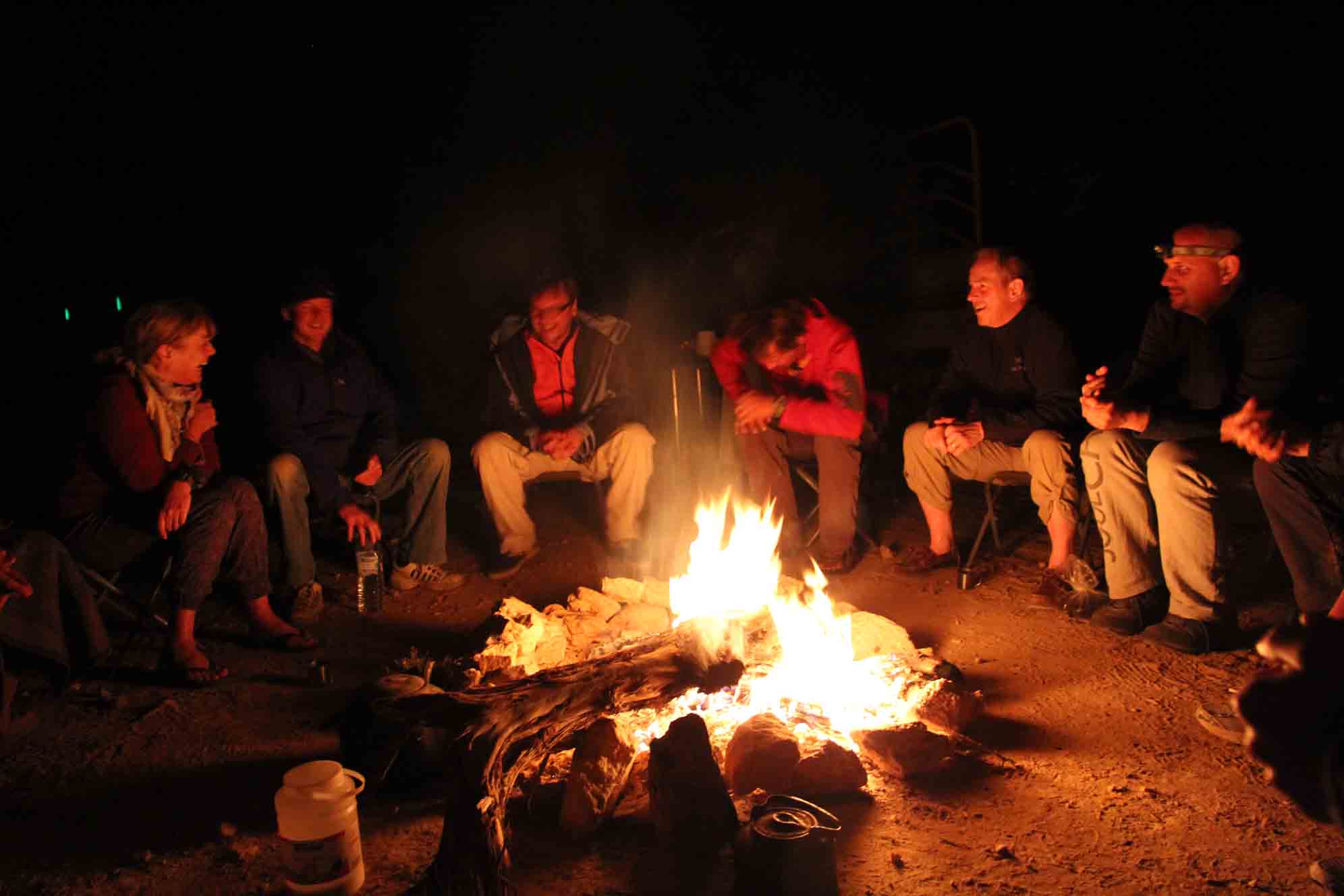 For the next five days, we walked through the wonderful country. Most people imagine the desert to be some sandy dune, bereft of solid shape or form, but here we graced with deep gorges, running wadi’s and Roman Sites. Mountainous paths climbed high above the plains allowing extensive views over the Jordan River into Israel. Snow falls here in the winter (leave that one with me..!) The stone here is so soft that make up is made from certain areas, whilst contour lines run through the sedimentary layers, displaying a map makers paradise. Wadi’s are filled with aquatic life, whilst the desert is arid and desiccated. The sun is incinerating and winds whip up the sand into thick and choking storms. We had tents collapse, a scorpion sting and camel spider chaos. Boots fell apart, poles seized and people coughed up dust. All in all, a pretty normal trip. 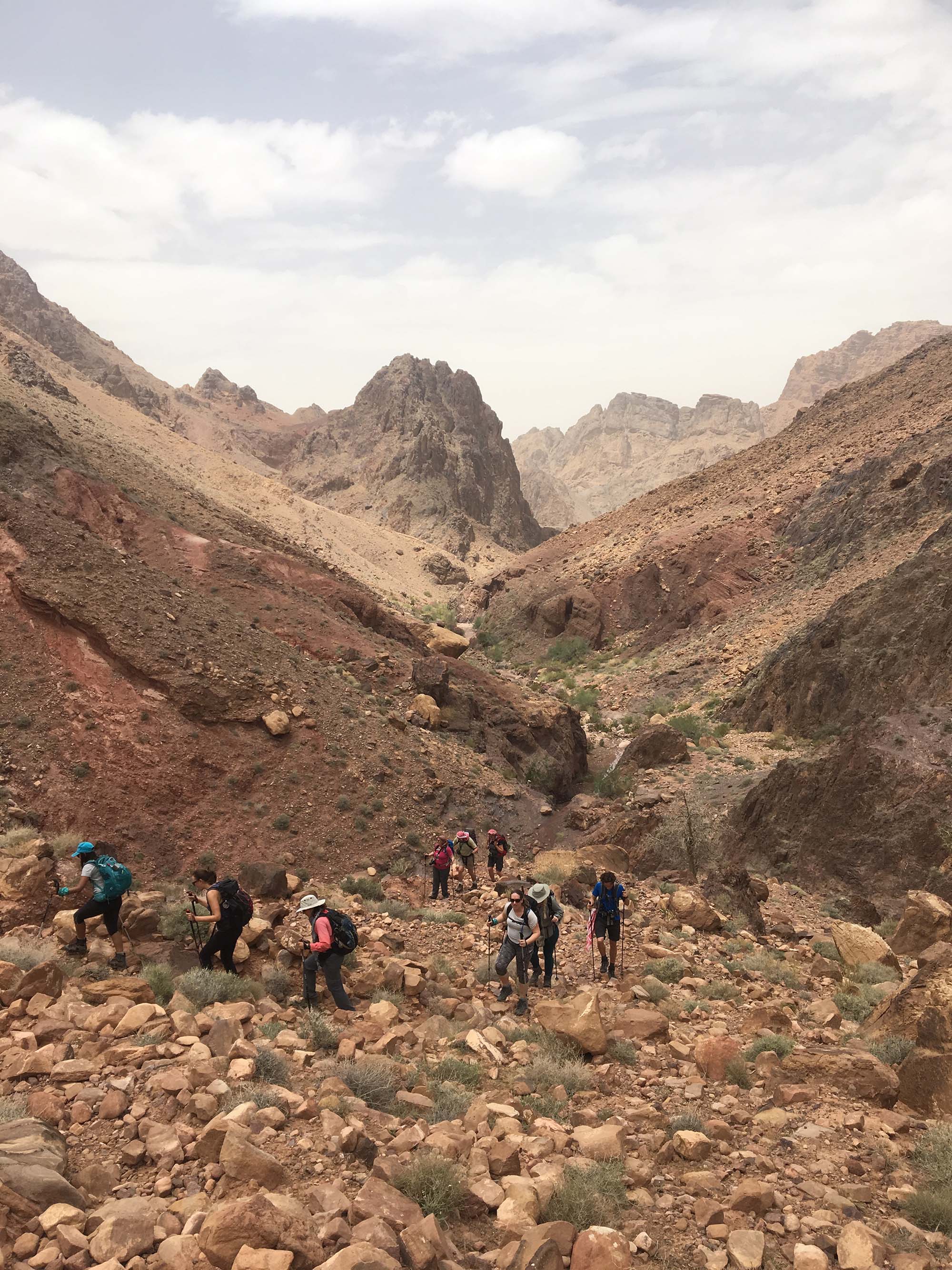 After leaving the desert we entered one of the most wonderful sights in the world – The Rose Red City of Petra. Over 2000 years old, it was long forgotten, but rediscovered in 1812 by Swiss traveller Johann Ludwig Burckhardt. It was famously painted by Scotsman David Roberts. I saw the top of the Monastery building poking from the distant rock face and for once, I got excited. The magnitude of this wonderful city is almost beyond words, but awe-inspiring is a start. Towering facades look above the land with great dignity and poise, making we humans seem small and insignificant. You really could just sit and look at then for hours. My travels have taken me across the globe and I’ve visited everything from ancient monuments to Commonwealth war Graves. I adore history and what we can learn from it. 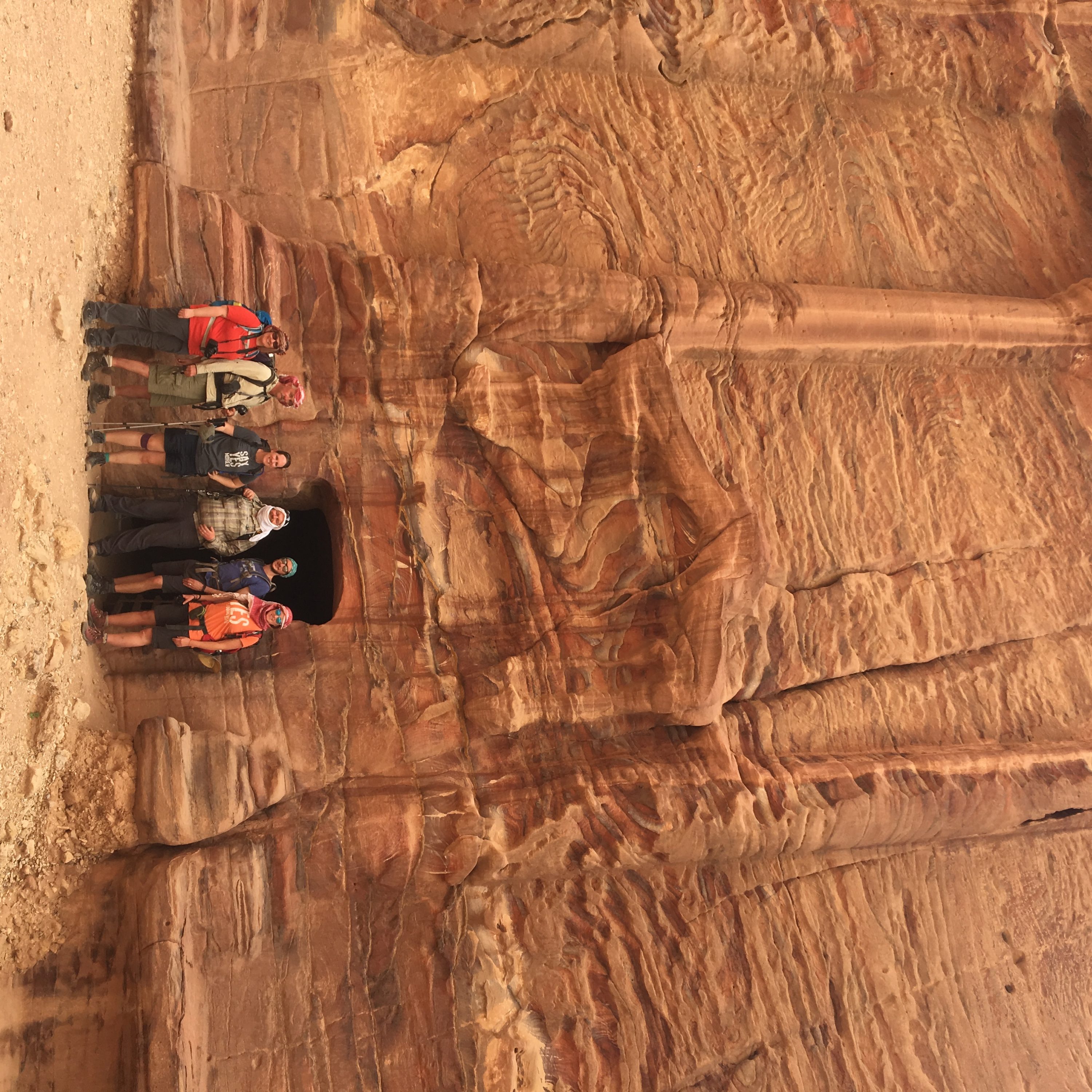 We descended the 800 steps int the valley proper to be surrounded by Nabatean and Roman structures, roads, Amphitheatres and temples. I could easily sit here for a week, just taking the site in. The famous Treasury sits at the end of the Siq, and is the magnet for most people’s desires. Famously filmed in movies, it is the gate where Indian Jones enters in his quest for the Holy Grail. Were returned after dark to see the treasury by candlelight and were struck by the sheer numbers of people here. Many sites like Petra are popular, but this is exceptional. Sheer weight of numbers are causing damage to the city, but it is a World Heritage Site and I hope that protection remains. Were a very destructive species…

The hard work was now done. We were whisked off to the Dead Sea for some R&R and mud, glorious mud. I had asked my podiatrist back at home about the Dead Sea and my skin grafts. Would they react..? Would it damage them..? I was warned to be careful, but found the sea very relaxing and beneficial. Smothered from head to stump in mud, I waded into the sea and floated. It’s almost impossible to do anything else. A word of warning about the Dead Sea. Don’t get any in your eyes or mouth..! I had to be led out at one point due to watering eyes and a foul cough. 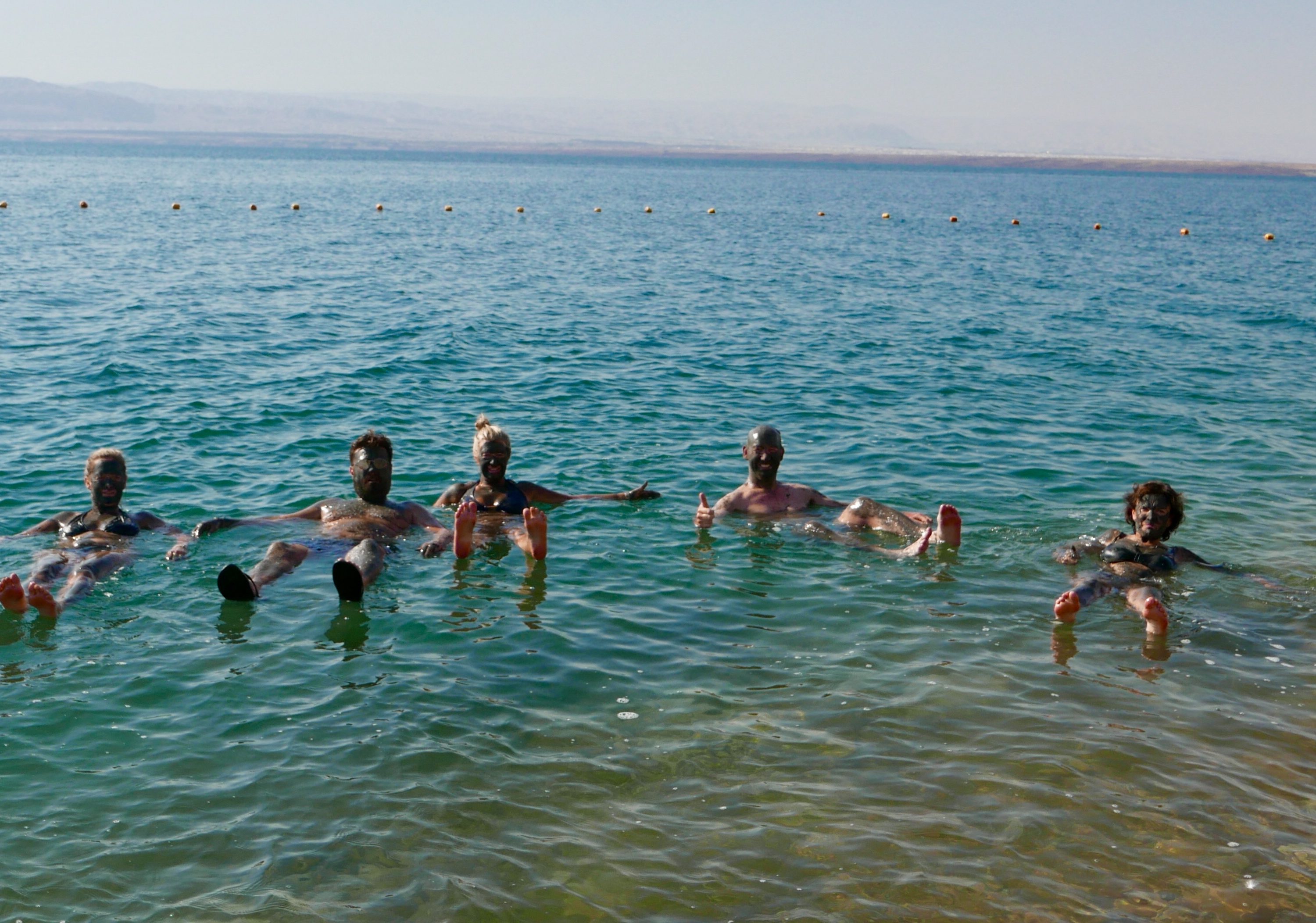 I’m not good at relaxation, but I did sit for a little time.  A last-minute trip, however, saw me on what’s left of my feet for a very special experience.

Described in the Gospels of Matthew, Mark and Luke, Christ was Baptised by John the Baptist in the River Jordan. The site is only a few minutes drive north of the Dead Sea and a few of us headed to this site of pilgrimage. As I mentioned earlier, religion has played a great part in my life and being given the opportunity to see this hallowed site was too good to miss.

Simplicity means a great deal to me. Modern life is so complicated, so this simple act in the river means so much. There is archaeological evidence here of stonework and steps, which is taken as the actual site, but that doesn’t matter to me. What matters is that it happened somewhere near there. The action is much more profound that the place. We were allowed to sit by the much-reduced river and I took off my shoes and placed my feet gently into the water. It was cloudy and cool, but filled with great peace. Bizarrely only a few feet across the water, Israel does the same. A rope down the rivers centre denotes the international boundary and is guarded by armed police. The Holy Land is still a place of conflict, but for a few minutes, I sat in harmony with the world. The waters brought no miracles this day and my pobble feet remained the same, but my heart was filled with joy.

Home called and I emptied the sand from my kit bag, did the usual post trip wash and smiled. I’d been with a wonderfully diverse group of people, who all learned from each other, respected each other and laughed with each other.

Isn’t that what the world is all about..?