After 10 months of fundraising for Cornwall Air Ambulance, the team were finally ready to embark on their journey of a lifetime – to trek the Inca Trail leading to the legendary Machu Picchu in Peru.

We arrived in Cusco with excitement at the anticipation of having a new adventure. We could see the old town as we were driven through its narrow cobbled streets, past age old markets and old buildings which show its rich history. We could also feel the difference in the altitude having arrived at one of the highest airports in the world. A busy day meeting the local crew, preparing for the trek ahead and a tour of the town meant for a sleepy team who were more than happy for an early night.

Over the next few days the group continued to acclimatise while exploring their new environment. With the first full day having an opportunity to see our first Inca ruins in Tipon which were only a short minibus ride outside of Cusco. The effects of altitude are such that you can feel absolutely fine while at rest or walking on the flat but as soon as you walk up hill you get out of breath fast! So a gentle stroll looking around ruins and hunting for pre-Inca pottery at altitude, which a number of the group were successful at, was a great way to adjust. We then we dropped down to an amazing spread of food by the local lake which we had all to ourselves. 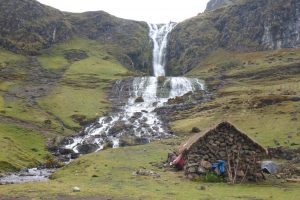 The next day we climbed up to an altitude of 4,105m passing through small villages, stunning valleys with the fast flowing River Urubamba bordered with eucalyptus trees providing welcome shade and a lovely fragrance as we walked. We were met at the top by our porters who had prepared us lunch of chicken, lamb, corn, avocado, sweet potato and yucca – a root vegetable that grows in the mountains. People were definitely feeling the altitude now and were grateful of the bus transfer to our camp. On the way we passed awesome scenery as we made our way down the mountainside having to do some pretty hairy passing of lorries on the narrow roads. We saw local ladies making their way down with their herds of llama, alpaca and donkeys. We arrived at our camp site at dusk (3,800m). It was amazing. The moon was out, we could see snow on the mountain top in the distance and we were amongst the clouds. Fantastic!

Most people woke about 5am at Quishuarani camp site after a broken night’s sleep due to the altitude and the excitement of the adventure we were on. Equally, it was amazing to open the tent and see the sun rising over the mountains, and the fantastic view made people feel a whole lot better. That morning people brushed their teeth watching the sun rise, lighting up the snow-capped mountains in the distance. A big day today with the highest point being 4,350m; supported by our mule team and watched over by condors which flew high above us. We reached the highest point, 4,350m, around midday with all feeling a sense of relief to have made it. A few in the group really had a challenging time with the effects of altitude, ranging from sickness, headaches, sinus pressure and migraines but with the support of each other, all made it to the highest point and were so proud of their achievements that a few tears were shed. After spending some time at the top having a little friendly competition with the pulse oximiter which measures people’s oxygen and heart rate we began our descent along narrow, winding and steep mountain paths.

Heading out of the mountains, the clouds began to build and the sky promised a wet night. We made it to camp just before the heavens opened turning the roads into rivers and flooding the camp. With everybody in the main tent keeping morale high with games and Milo, local staff and I worked frantically to fix the washed out tents. Still the British stiff upper lip prevailed and an insistence that we continue with our planned itinerary to visit the hot natural spring baths saw us all in our swimwear in torrential rain! Not unlike the British at all really! What a brilliant move though, the baths were incredible, to feel the days aches and pains melt away in 40 degree natural waters with 360 degree views of the mountains was superb and fully energised us all.

Several days had now past and the time had come to get ourselves onto the trail that would lead us to our ultimate destination… Machu Picchu! A real change in climate awaited the group after the train took us to the start of our trek for the day. Hot, humid and tropical so although lower down, slow and steady was still the order of the day. Crossing the Indiana Jones-style bridge swinging high up in the air took us across Urubamba River and onto the Inca Trail itself. With waterfalls, big drop offs in places and a rain forest that’s full of wildlife there was lots to see on the way, but all paled in comparison of the Sun Gate. The approach to the Sun Gate was a big challenge with a flight of almost vertical stone steps which most people required the use of both their arms and legs to get up. The rewards were that of a framed panoramic view on one of the greatest wonders of the world. It was an emotional time for all involved, especially as everyone was raising money for this charity so close to their hearts.

For the final day there was time do a bit of sight-seeing and shopping for souvenirs with a number of people taking the opportunity to see some more ruins just outside Cusco. The group thought it best to get a guide but unfortunately invested in what turned out to be an exceptionally eccentric and tragically hilarious guide who appeared to have the unique skill to seamlessly hop from one disaster to another while showing the group around the interesting natural features and ruins. One element of his particular brand of tour included a rock that looked like a natural slide that you get at a theme park. His insistence on everybody having a ride on said rock was backed up with his own personal brand of demonstration. With a big smile on his face and child-like enthusiasm he rocketed down the slide to show everybody how safe it was… and he was right, sliding down was completely safe, however the stopping of said activity was another matter entirely. Needless to say the group were not convinced to try it, even after he managed to stop limping!

A fantastic trip, with all who set out on their journey well over a year ago successfully achieving their goals while raising money for charity as the same time. Well done Cornwall Air Ambulance team.