The 2 black choppers rapidly worked their way up the Khumbu valley below us. Their rotors straining against the ever thinning air as they gained altitude to draw level with us and then roar overhead, they were heading for Ama Dablam. The mountain I was approaching with my small climbing team. My immediate thought was “sh*t, what now…” this is never a spectacle that draws a lot of confidence about your up-coming climbing experience. That the machines were packed with camera heavy Japanese seemed un-likely. 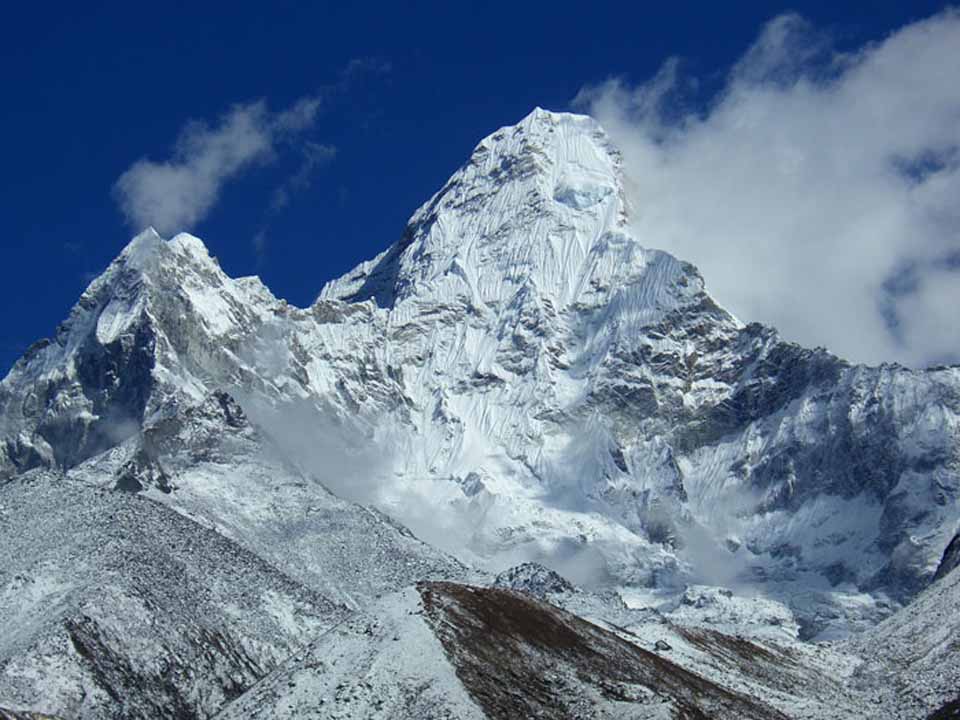 The machines didn’t land at basecamp as expected but continued higher along the South-West ridge to begin hovering above the site that I knew to be Camp 3. This place had been the scene of tragic accidents in the past and it looked from the stretchers being lowered from the choppers that history was about to repeat itself.

In 2008 a huge chunk of ice had fallen from the 3 story high glacier known as the Dablam suspended directly above the highest camp of the mountain. It had broken up into many pieces en-route to the camp and created a barrage of ice that had caused quite a number of fatalities as it slammed into camp.

The Dablam (or mother’s necklace) had always been a temperamental beast and periodically dropped ice into the void below. This provided the route with considerable objective danger and the trick was to by-pass this section as quickly as possible and to steer a path well over to the side of this massive feature and avoid climbing underneath it as much as possible. Judging by all the commotion as we entered basecamp things had heated up once again. A powerful telescope had been set up in the middle of the camp and an excited crowd of climbers had gathered around it. It was trained directly at the Dablam. Even with the naked eye it was obvious that enormous cracks had appeared in the glacier and that a huge hollow cavern had formed in line with the normal climbing route. From the word on the street it would seem that tragically there had been several terrible injuries and a fatality caused by dropping ice and that the fixed rope leading from the high camp had been severely damaged. Several teams had already descended from the lower camps un-willing to continue in wake of the accidents. The most ominous news for those who had freshly arrived to climb this mountain was that the glacier was still very un-stable and that huge chunks of ice continued to break free and hit the camp and route below. 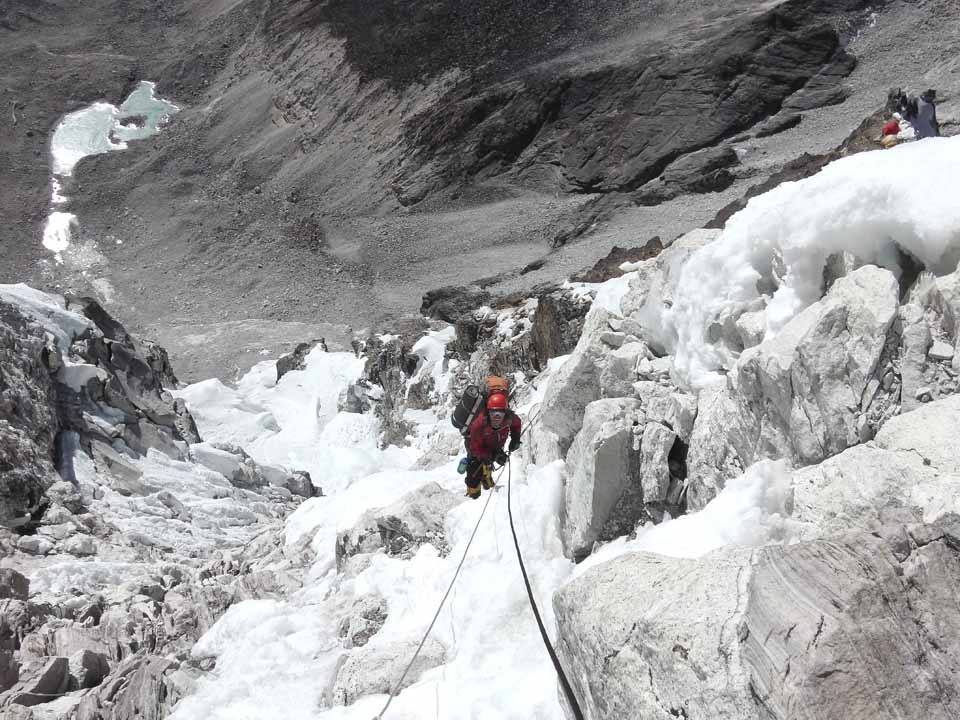 Optimism and patience are an alpinists finest virtue; disaster can happen all around but climbers harbour that secret feeling that it can’t happen to them, or in this case; it’s early days yet and the thing will collapse entirely or stabilise sufficiently to get those ropes back up and give us a chance to reach the summit. Having acclimatised to 6000 meters on prior objectives we began the work of climbing the route the day after our arrival into basecamp. The Alpinists 3rd greatest virtue of almost psychotically blocking out all signals and focusing only at the task at hand had begun to set in. Over a few days we ferried supplies to the spectacularly located Camp 2 and began to feel at ease with this rather airy part of the route. What lay above camp 2 so far we had studiously managed to ignore.But other teams, perhaps a little more cautious were leaving. This included well-known companies and individual groups of friends. The collective wisdom was that things were not going to settle down and that the route would be well out of control for the rest of the season. Hell, as we had reached camp 2 to spend the night a chunk of ice the size of a bus had calved of the Dablam serac and slammed into camp 3. It continued to be non-stop disco action.

Our team had a pow-wow, that’s how we like to do things; Clients, Sherpa and the Guides get together to have an equal say as to how things ought to precede. In the past going against collective wisdom has served me well; My small team was the only one out of 26 to summit on Muztagh Ata in 2012 and was included in only three out of 21 teams to summit Manaslu in 2013. In these cases a wrong weather forecast and the fixed rope not being in place prevented everyone else from reaching either of those summits.But there is no arguing with a chunk of ice the size of a bus, nor with an active serac which grows uglier by the minute. The team decided to go down. The risks of continuing, placing the lives of the Guides and Sherpa at risk in order to fix the ropes or to spend any amount of time underneath this monster on the way up and down on the summit bid was un-justifiable. The correct choice was made; descend for a beer or two in Namchee being the only sensible choice.And these of course are an Alpinists 4th and 5th greatest virtues; Common sense and to have a good ole’ drunk when the game is over.  The mountain isn’t going to move in a hurry and for sure by next year it’ll be in great condition, right? 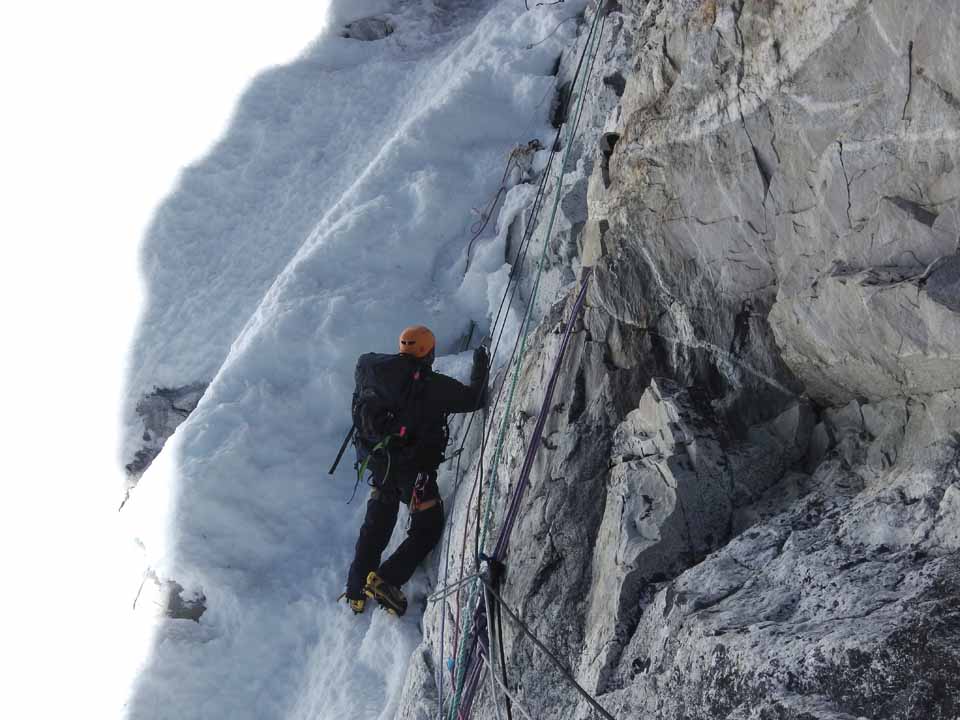