Foods from my adventures around the globe

I’ve often been asked about the favourite meals I’ve had around the globe – and over the years I’ve learnt that food can really make or break an expedition!

Here are some of the dinners that stand out in my mind, although not necessarily for the culinary expertise!

The land of the Inca is immortalised by tales of conquest, incredible fortress-like ruins, jungles, towering fluted mountains and for the eating of guinea pigs.

It’s fascinating to watch a guinea pig running around a homely kitchen scavenging for scraps of food and then being roasted over a fire and served as a meal itself. It always strikes me as strange how different things are a food for some but not for others.

The last time I was in Peru and treated my team to the local dish, one of my trekkers broke down in a flood of tears. It rapidly transcended that she ran a guinea pig farm and had lots of furry critters at home and treated them all as if family! It sure took a lot of explaining and eventually a big hug for her to appreciate these cultural differences. 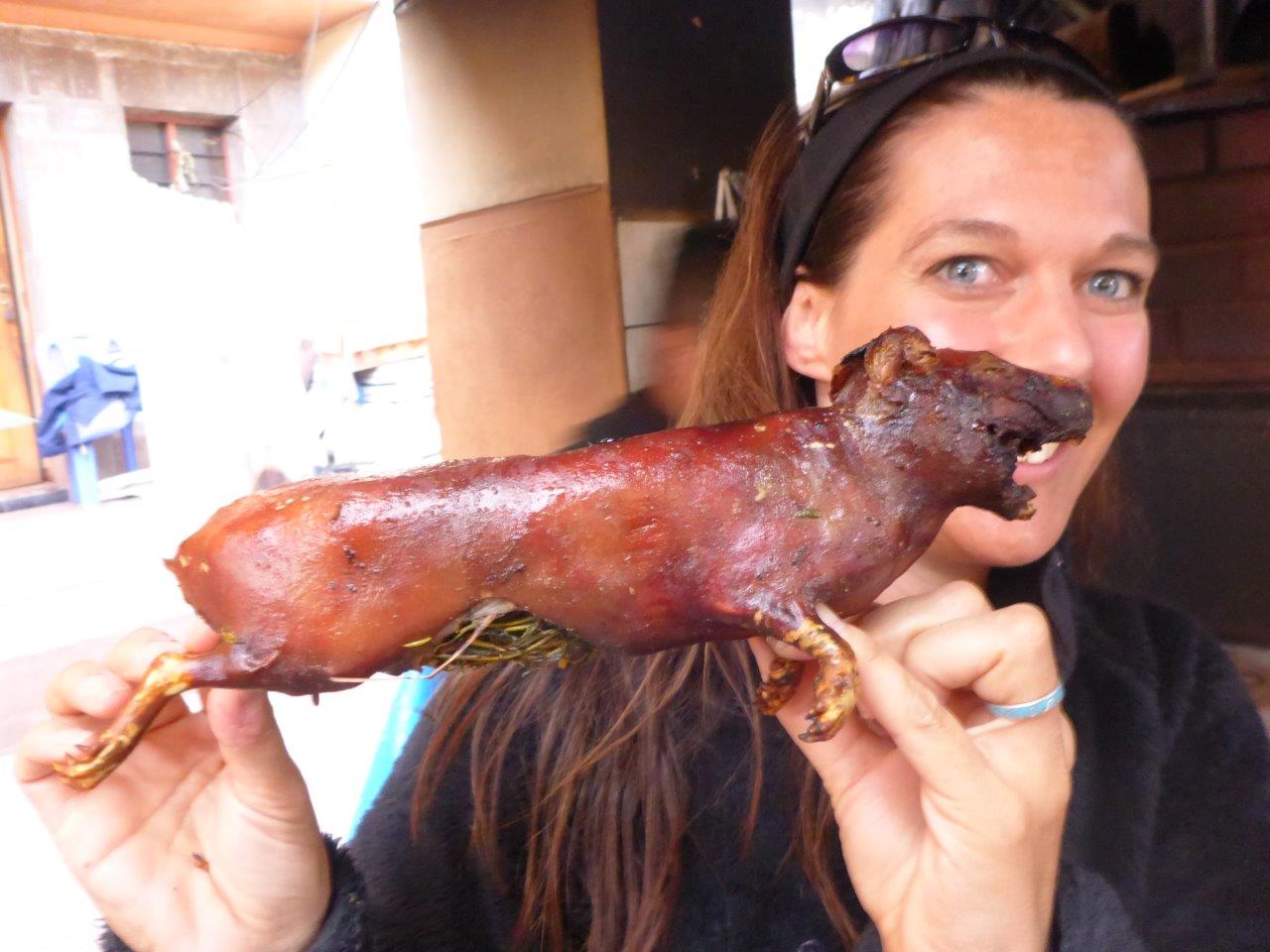 Christmas pudding, like the romantic Valentine’s meal, is worth waiting for. Special traditions however lose their glitter when you haven’t eaten for days and the fish are not biting. Years ago, a friend and I were paddling the Congo River and we were faced with imminent starvation from a meagre diet of grasshoppers and the occasional banana.

The ridiculous thing was that my travel buddy had a Christmas pudding hidden in his rucksack but was determined to wait until Christmas Day, still over a week away. Some traditions, he said, need to be observed. The food situation became unbearable and I was going crazy with dreams of that pudding. It taunted me relentlessly.

Finally, the great day came and we ceremoniously and frantically opened the tub. But instead of the sweet aroma of Christmas pudding we were met by a vile stench and a mass of wriggling maggots! Still, like the man said, some traditions are worth observing and we just dived straight in! Under the circumstances it was delicious. 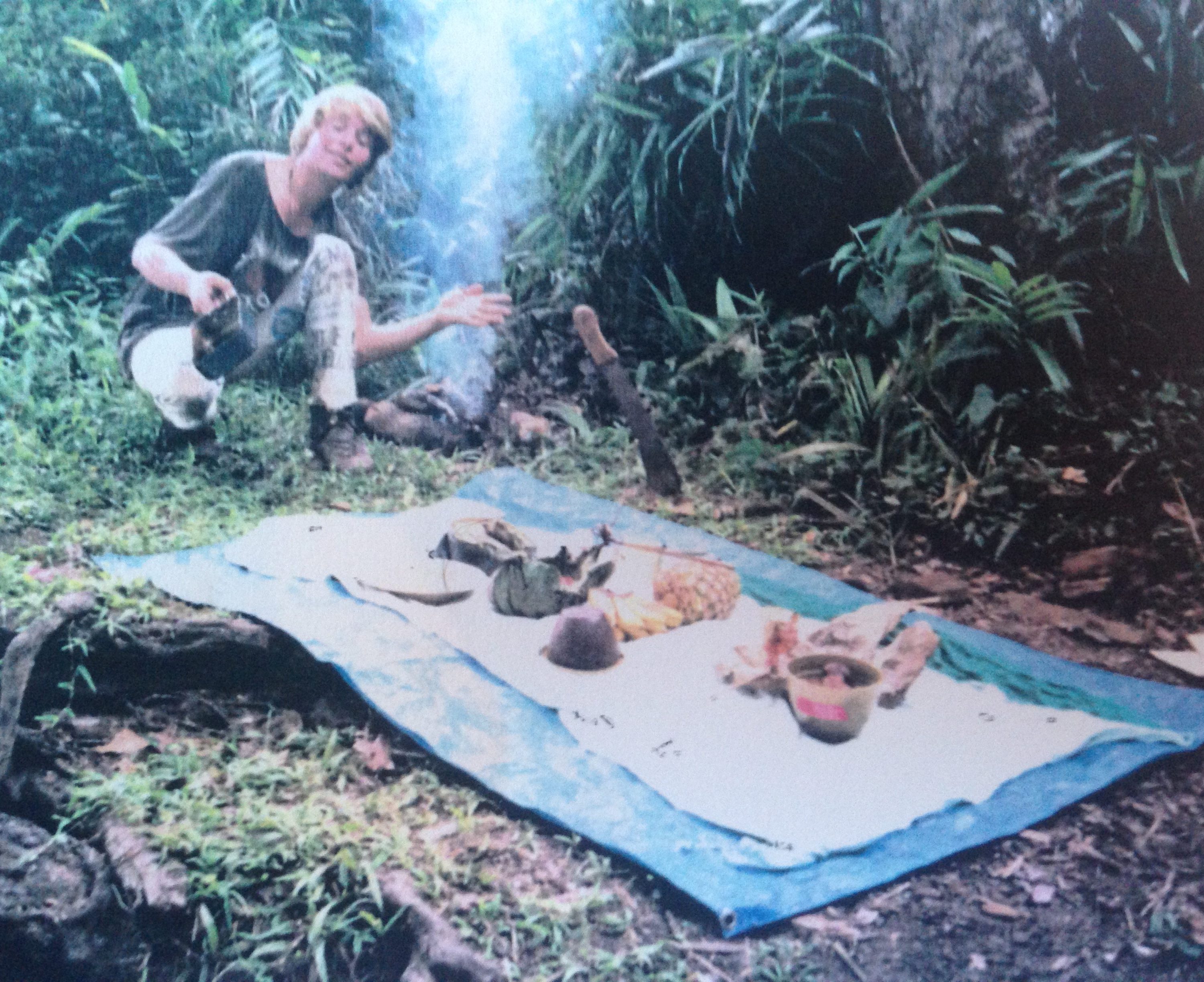 Living with the Bedouins with our kids for a few weeks was an awesome experience. Together we traversed the desert of Wadi Rum, slept in open sided Bedouin tents, sang songs around the campfire, explored the ruins of Petra, endured sand-storms and ate goat in 100 different ways.

It was all going so well until we were served their most savoured dish of all, Fatteh. This concoction is made from goats’ milk, goats’ ghee and lots of scraps of flat bread. The ingredients are placed in one big pot and left in the scorching sun for a few days. 10 right hands are gratefully dipped in and communal dinner is served. The faces of my kids – brought up to be polite and appreciative – contorted in the most hilarious of ways as they ate, knowing it was the only option for the days meal.. 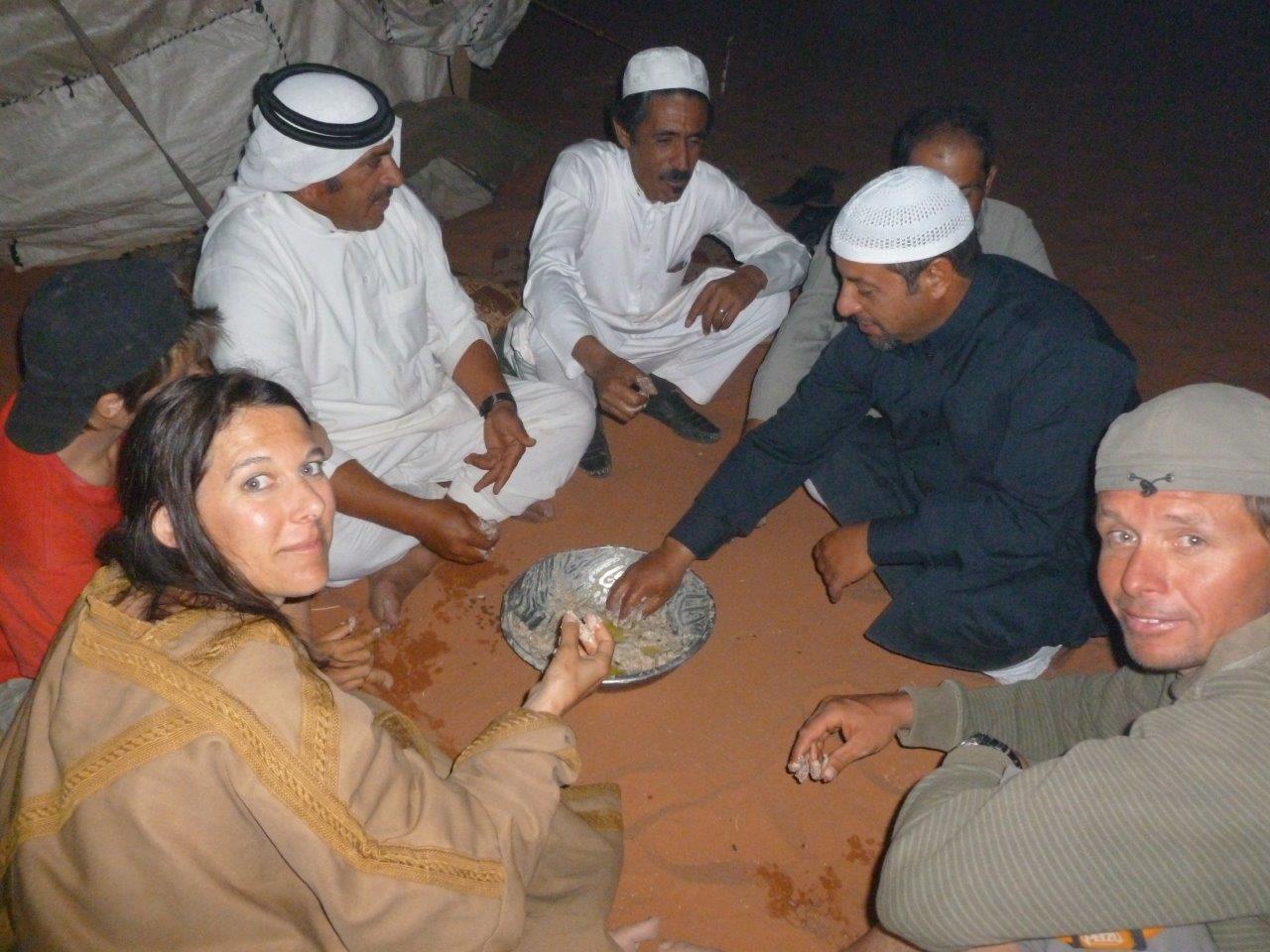 Hitching north from Patagonia my good climbing buddy and I got stranded in the Atacama Desert. Traffic had been scarce for a couple of days and the food even scarcer.

Sat on the side of the road looking like dirt bag climbers, my friend piped up that he had a can of tuna buried deep in his rucksack. He fished it out asking to borrow my can opener. “Pass me the can and I’ll open it” I replied. We went around in circles and this started the first and only fist fight we have ever had, despite being climbing partners for years! Within seconds he threw a stone and I threw one back, then he threw a punch and I threw one back… The fight only stopped when a car pulled up to give us a lift. Still snarling at each other we got in and eventually the dust settled.  As a peace token I bought him a tuna fish sandwich. 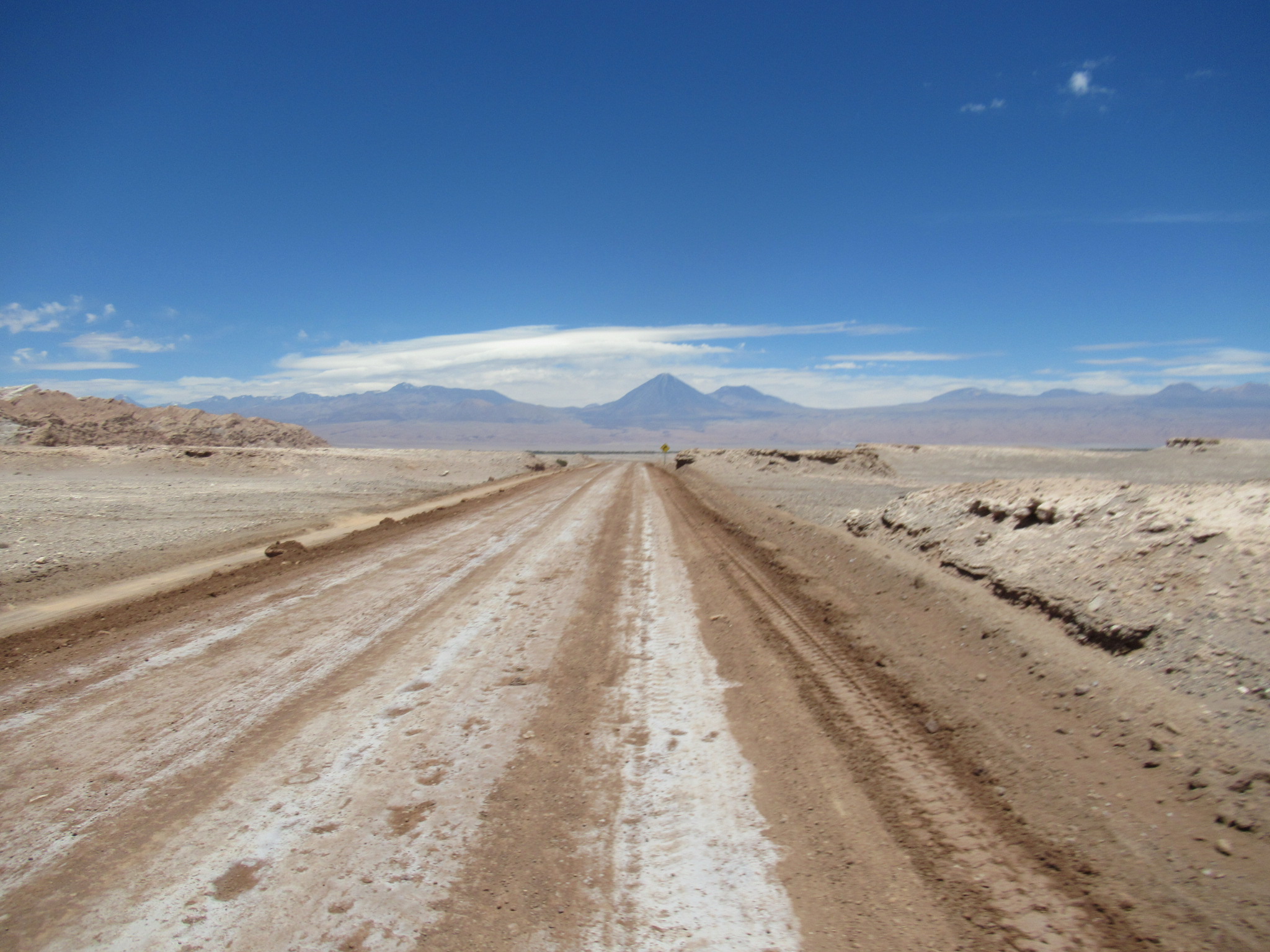 Samburu boys of northern Kenya need to hunt a buffalo for them to become a man. These hunts are taken very seriously and they spend years crafting the perfect spear and learning how to use it. My lovely wife Marni and I were travelling through this incredible part of the world a few years ago and were thrilled to be invited to partake in this ceremonial event. The spears were freshly sharpened and the boys were ready to go. It all would have been perfect if the buffalo had cooperated too!

After days of trekking and tracking we couldn’t find any. Still, to save our hunger that was mounting, we decided to hunt something that was easier to find, catfish. The only snag was that we didn’t have any fishing gear but then Marni produced her copper bracelet. Within seconds this was fashioned into a rustic hook and a catfish was caught! Not quite a buffalo but a delicious meal nonetheless that tasted even sweeter due to having been in the bush for 3 days longer than expected, with only plain rice in our packs. 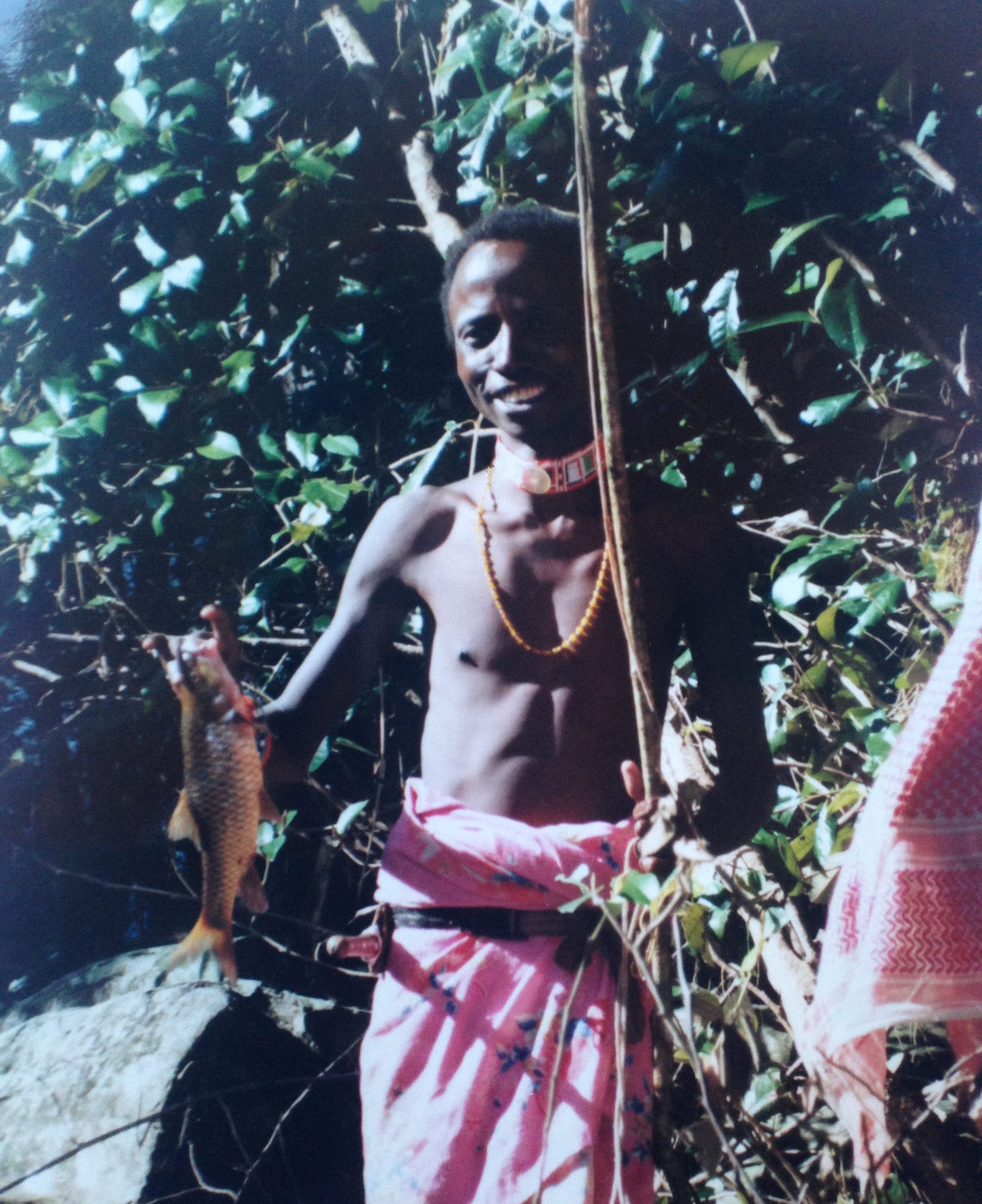