Jordan and Petra, an experience of a lifetime

Petra, Jordan – one of those faraway places that’s been on my wish list for as long as I can remember.  So when the 360 email came through from Marni, outlining a new trip they were planning, trekking through the deserts and mountains of Jordan and ending up at Petra there was no discussion – John and I were signed up within 24 hours, and the planning began.

By the time we were ready to leave for Amman the small group of us that were booked to go had been chatting and emailing each other for weeks, meaning that when we eventually met it seemed like we already knew each other, which set the tone for the coming week.  Feeling a little apprehensive about sharing an experience so anticipated with people I’d never met, never mind close encounters within the basic confines of a Bedouin desert camp, it was reassuring to realise within a very short time that we all hit it off as a group.

Arrival at Amman’s shiny airport was on time, but as it was past midnight before visas and customs were sorted we met our tour leader Graeme Fordham and were whisked straight to our first night’s stay in a comfy hotel not far from Amman.  Next day was spent travelling down to Mansura via Mount Nebo and Karak Castle, two of the most famous historical landmarks in Jordan.  This country is just stuffed with history and has played host to so many different civiliations that many of the landmarks have been built and rebuilt on top of each other over the centuries.  It makes fascinating viewing for anyone even remotely interested in history.

By the time we arrived at camp and our introduction to the Jordanian team we were all ready for a stretch and a drink.  The Bedouin camp was set in a stunning location overlooking Wadi Daphna where we would be walking the next day.  The tent, open on one side and woven from black goat hair by Bedouin ladies was at once cool and shady, then once the sun had gone gave shelter from the evening breeze.  The evening was spent getting to know the ground crew, listening to stories and being given our Bedouin names – Abu (father of) or Am (mother of) plus the name of our eldest child or parent.  It took us a few days to realise that we were being spoken to with these names, not our own names! 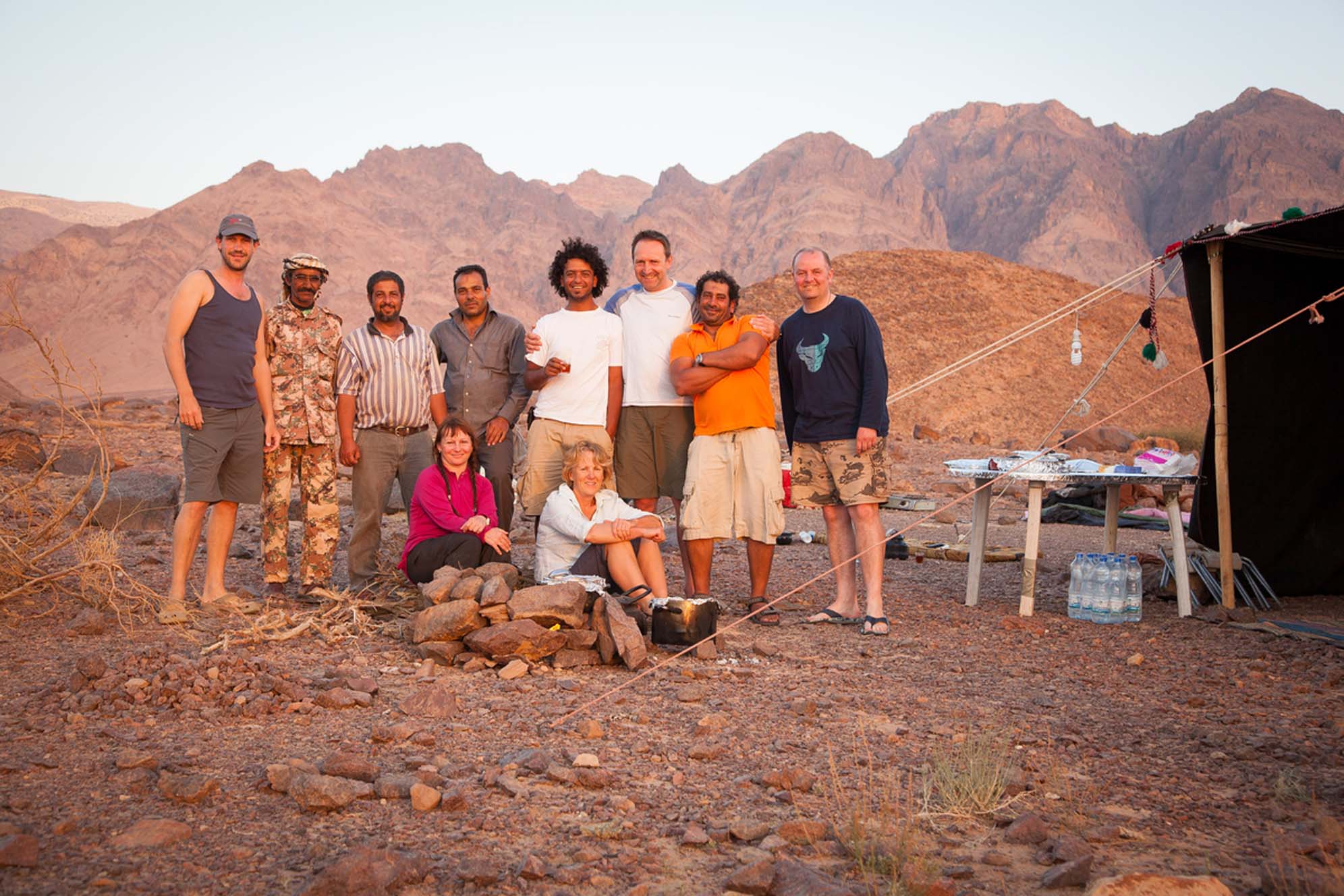 Early breakfast of ‘fool’ (a staple of fava beans mixed with several other things and absolutely delicious), pitta, honey, dates etc., plus lots of hot sweet tea or coffee, set the tone for the week, as we set off before the sun got too hot.  Packs weighed down with at least 3 litres of water each and one of chef Ali’s tasty box lunches.  Pasty British skin was plastered with sunscreen and we were off.  Our first impressions of what we assumed would be dry, arid landscape were soon swept away when we descended into the wadi to find a jungle of Oleander bushes in full bright pink bloom, alongside date palms and huge rushes reaching 10 feet or more.  We crossed and recrossed the water running down the wadi before climbing up and over the shoulder of one of the Shara Mountains and then dropping down into another green oasis of cool shade that is Wadi Feinan.  After countless pauses for photographs (Graeme being a professional photographer meant lots of useful hints and questions asked) we eventually arrived at our camp late in the afternoon.  More history – the camp sat next to an archaeological dig site of a Stone Age settlement, a Byzantine tomb site and just along the track was the remains of both a Roman and a Byzantine castle with aqueduct and water collection cistern.

Having been told by Graeme that the first days walking would be pretty easy, some of us were a little apprehensive about the rest of the week as it had been fairly taxing – rough and steep with the odd scramble down a rock wall in places.  However as the trek continued the variation in the type of landscape we passed through along with the stunning views as we reached the summit of each pass meant we were eager to start each day and see what it entailed.  Artif and Hamsa, our two Bedouin guides, were hugely encouraging and supportive, as was Graeme, and there was always a cup of hot, sweet Bedouin tea to look forward to when we stopped to rest in a shady spot during the heat of the day.  Over the week the temperatures rose to around 35 degrees, but the group acclimatised well – and with the prospect of the cool shower set up and waiting for us at camp at the end of each day, we made good time over each trek.

On the final trekking day we came down to the asphalt road, and met Yusef with his truck who drove us the final few kilometres to his Grandfather’s traditional cottage not far from Petra.  There we stayed the night and were treated to a feast of roasted lamb, plus traditional musicians playing an Oud and a drum and singing to entertain us while the brightest moon of the week rose behind us.  Sleeping on the flat roof of the house was another experience to cherish – only marred by the various dogs of the neighbourhood having a howling competition! 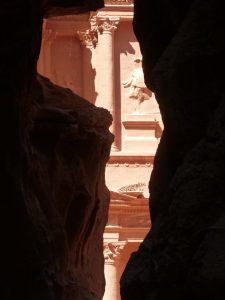 Arriving at the gates of Petra by 7.00am the next morning gave us a head start on the majority of the tourists, and we meandered our way into the Rose City with cameras at the ready.  We had a guide for a couple of hours, who gave us an overview of the best places to see and then the rest of the day was ours to take our time and wander where we wanted.  Petra was everything I hoped it would be and more – the site is far bigger than I expected and has over 3,500 different tombs and buildings, including many which haven’t even begun to be excavated.  The size of the tombs themselves is immense and quite incredible is the quality of the building when you remember that most are over two thousand years old.  During the afternoon we retired to our hotel just near the gates for a cooling swim and a short rest before returning to the site for a final climb to the highest point to watch the sun set over the city.  Weighed down with purchases from the Bedouin ladies who line the paths with their stalls of brightly coloured jewellery, scarves and toys we headed back to the hotel, hot, dusty and tired with heads buzzing from the sights and sounds of the day to sleep like logs in a proper bed for the first time in a week.

And so to the final day – a leisurely breakfast then a transfer down to the Dead Sea and some luxurious comfort for our final day – Dead Sea mud, lounging by the pool, air conditioning and Happy Hour at the bar brought us well and truly back to the 21st Century, along with armed security for the World Economic Forum for the Middle East which happened to be going on in our hotel that weekend.  It brought home to us the sad fact that we were in an oasis of calm in the middle of a troubled region, and that the arid mountains we could see on the other side of the Dead Sea were in The West Bank with all the problems that area has to deal with.

Jordan well and truly lived up to my expectations and then some – Petra being the reason for going ended by being the icing on the cake.  The trek gave me the chance to delve beneath the surface of a fascinating country and to meet some of the most welcoming, generous and open people I’ve had the privilege of being around, and to travel through an amazing, awe-inspiring landscape that I will not forget.  Thank you 360 Expeditions, for an experience of a lifetime.