No mountain expedition goes fully to plan, especially one as long as The Khumbu 3 Peaks. After a rather chaotic start; with one team member’s plane diverting from Nepal to India, and another’s bag deciding it would take a vacation in Delhi whilst we hike in Nepal, normality has been resumed after a last minute helicopter booking and the bag joining us on the trail. The team members are bonding well as we chat over huge portions of breakfast, lunch and dinner. Attempts to live stream the Rugby World Cup have failed, but live text updates from friends and families have been appreciated :) 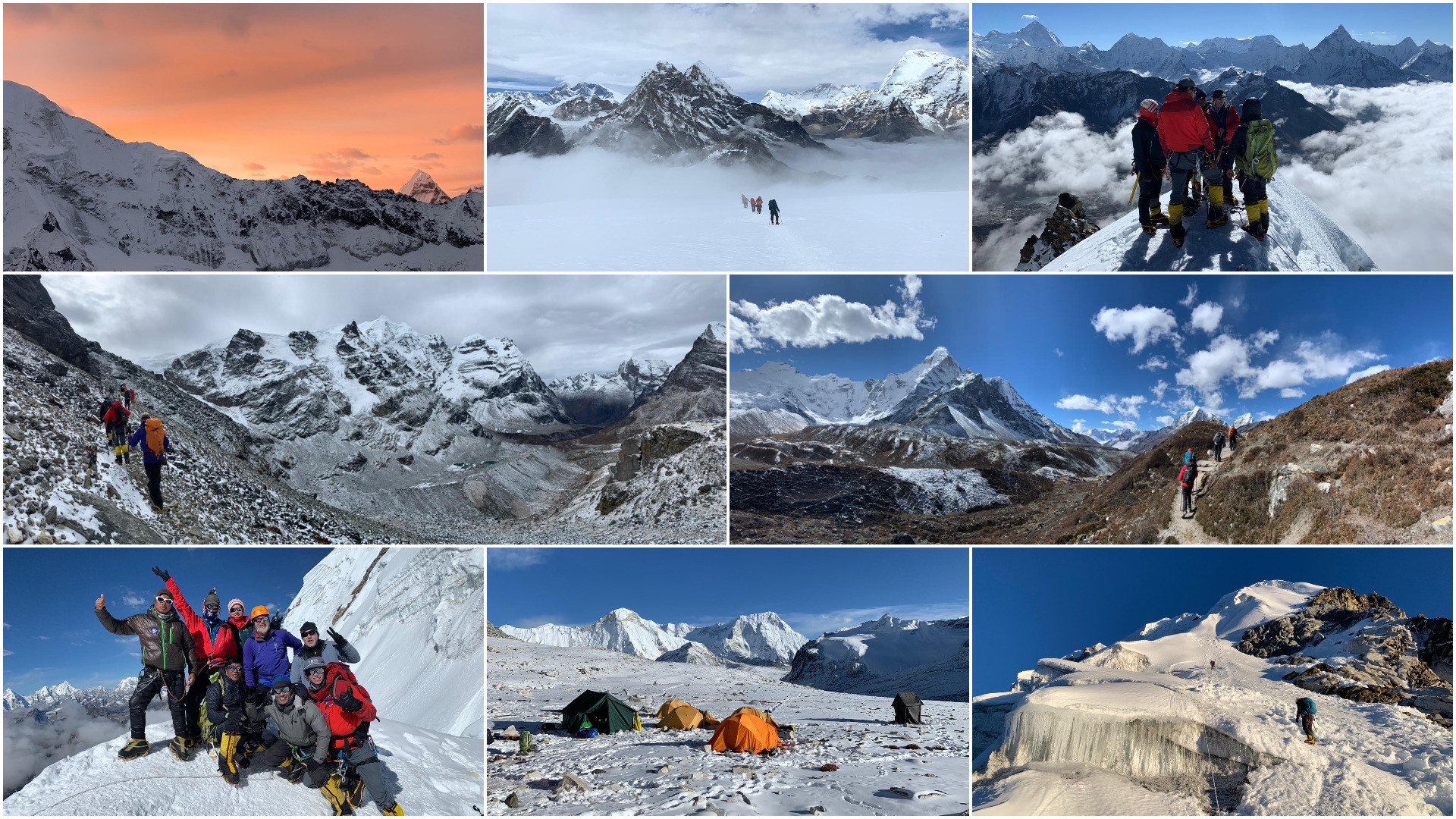 The first 8 days of trekking were amazing in the remoter areas of the region!

It started with reaching the summit of Mera Peak. With extremely high winds forecast, it would seem that our first objective would be scuppered and we would have to continue on our journey without the highest of the 3 Peaks.

However, reports from the mountain suggested that winds weren’t as strong as forecast so we proceeded cautiously with a “let’s just go and see for ourselves” approach.

On we continued to the beautiful Hunku Valley…

This is my favourite part of the trek. No connection with the outside world, just our team, the local shepherds and massive mountains surrounding us. This region is truly outstanding!

In perfect weather conditions, we made our way up the glacier to 5,900m and the top of the Ambulapcha pass with stunning views in all directions!

After a short rest, we descended the via ferrata to a 50m abseil, down to our third valley of the trip and the base of our second mountain – Island Peak.

The team had a relaxing day before setting off at 2am on Wednesday morning for our second summit of the expedition. The first objective: get through to sunrise – and oh my! What a sunrise it was… leaving the surrounding mountains glowing reds, oranges and pinks, it certainly was a site to behold!

Everyone made it to that point! Phew…

Now… keep going to crampon point and across the glacier to the mighty, lung-busting headwall… once again, the full summit team was together and moving (slowly) onwards…

The headwall: every time I return to Island Peak, the final ascent just gets harder! The glacier melting and lack of meaningful snow now means that the fixed ropes no longer end on the famous ridge of Island Peak. They head directly to the summit!! Believe me, this additional 50m of fixed rope makes it an extremely tough ascent! Everyone who left for the summit, made it to the top! Woo Hoo! (alas, no group photo this time – it was far too cold for each party to stay up there too long).

After leaving Dingboche and the Everest Base Camp Trail, we headed off the track and hiked the steep, rocky slopes to Lobuche East high camp.

The team then set off at 2am under clear skies. Starting on the sloping rocky plateau of high camp, we negotiated the icy steps and steep scrambles to the crampon point. The team dug deep and reached the summit of Lobuche East at 8am on Sunday morning! Our final objective of this incredible expedition reached.

It’s as tough an expedition as you are likely to find, but a hugely rewarding endeavor. Most of the team have ascended over 10,000m in less than 3 weeks, hiking every single day during that period. It’s fair to say that everyone is tired! They have had a ball and it has most certainly been about the journey full of awesome achievements by them all.

We have had a BLAST.. Remember expeditions are about the experience and the fun you have along the way!

If you’re considering this trip next year, I urge you to train hard! It will give you a strong chance of reaching all three peaks but, more importantly, it will allow you to enjoy your time in this wonderful area of the world.