Kilimanjaro expedition, what an incredible team and mountain!

What can I say about beautiful Tanzania and Kilimanjaro itself? From my first time out as a client in 2013 via the Machame route, I always dreamt to go back to the enchanting mountain to lead clients, and hopefully give them as much of a rewarding experience as I had myself. From the couple of meet ups with most of the team members, I knew it was going to be a blast. The motivation of the fundraising that they were doing, the banter and friendships between them, the challenge of the mountain itself, and a couple of “benchmark” birthdays to lure them to Tanzania.

Arrival and getting the team together:

Sal Salinero lodge in Moshi, is a relaxing, friendly place to gather your thoughts and share some beers and discuss the common goal of getting to the top of Africa’s highest mountain. The usual anxiety laden questions popped up over altitude, food, sleeping in a tent, and of course, the toilet situation! As the beer flowed, and the team gathered from their respective flights, it all turned to fun and laughter to calm any nerves.

The drive to Londorossi gate gave us the opportunity to see some of Arusha National Park animals, including zebras and the surprisingly well hidden giraffes! Kevin had a grin on his face all week after seeing these majestic beasts trot off after posing for some pictures. Graham had been on a paid safari a week before we met, so this was cause for a few giggles!

After checking in and meeting our support team for the trek, we headed off. Mussa, Sticky, Big Mussa, Benny, and Ayoub would be our main guides throughout. They would always be there for us, and nothing was ever too much trouble. It is always a really fun part of the trip when the team from the UK chat with our guides, and get to know them. It normally starts off with football teams, let the banter and rivalry commence!

A couple of nice gentle walks through the alpine moorland to get us going, and for us to soak in the sights of the clouds, the scenery, terrain, and of course, Kili herself. When getting in to camp, the team were greeted by our porters, chefs, and head guides singing, clapping and dancing. Sticky was here for a reason! His constant, genuine motivational singing and dancing, and his stature (long and stick like, hence the nickname!) It didn’t take long at all for everyone to be deeply involved as one team from there on in. One of the highlights of the whole trip, is to mingle with these guys, their work and work ethic in second to none, and would put 99% of us in the UK to shame!  They genuinely love what they do, and never fail to humble us.

Day 3 was our first long walk, and first test at altitude. The Lava Tower (a volcanic plug) at 4,600m always proves to be a challenge for some, but with an amazing lunch, and then a descent to 3,900m, it doesn’t take long for the team to feel strong once more. The food and liquid intake from everyone was really good, no appetites lost in the slightest. This is credit to the fantastic chefs, who work tirelessly to produce the amazing meals they do. Having chicken and chip omelettes after a carrot soup starter at 4,600m will always feel like a surreal experience to me! The descent from the Lava Tower to Barranco Camp throws up some amazing views of giant lava flows, the weird and wacky groves of giant groundsels. The following day’s main event is also clearly visible (providing the clouds aren’t in!) the Barranco Wall.

The Barranco Wall is an amazing day, which breaks up the trekking, to involve a little hands on rock experience, with a few steep drops here and there. The wall itself is about 250m high, and snakes up to Karanga Camp. Watching the porters from Barranco Camp carrying the weight that they do, negotiating routes around the hundreds of trekkers is always jaw dropping. We queue like the polite Brits (and one Chinese) we are, letting them through, and giving them space. Spirits are high, and our singing voices are strong! The Lion Sleeps Tonight (including the high bits!) was the song of choice for the wall, and we were certainly the happiest and joyous of folk on the mountain at that point. The banter between guides and clients was incredible at this point. Alan Partridge’s “Ahaaaaa” was introduced for the first time, and managed to stick for the rest of the trip when it came to the motivational chanting. Not to name names of course, but one of the clients (Kevin!) seems to come across very much like the beloved Beeb character, who gave us some of the most memorable “had to be there” moments.

So, trying to get to bed for some sleep after a short half day of walking, with the anticipation of summit night is always difficult one. Breakfast is at 11pm, in the freezing, wind battered mess tent, as one by one, the clients surface. All readily packed and wearing the warm gear for the 10hr summit day. Midnight we start to head up. Some of the guys have never walked up a mountain in the dark before, let alone been at this altitude of 5,000m before! The tiny, blurry lights of Moshi behind us. The head torches above us, stretching up to the stars. It is sometimes difficult to work out at that point, the difference! The constant song singing from our 11 strong support team keep us awake and cheery. It is particularly cold and windy, the toes would feel it this time! When the sun starts to rise from behind Mawenzi (one of the two extinct cones on Kili) the warm thoughts return, and Stella Point approaches. Stella Point is the crater rim landmark that most of the routes lead to. A quick check over of the team, and we start to head up to the summit. The snow fields and glaciers greet us to the left, the dusty ash pit and crater to the right. There are plenty of teams at the summit queuing for the group photos, and we all magically appeared in the same group photo somehow! 13 of our 14 strong group managing to successfully summit together. The usual dreamy recollections of the summit approach from the team members come out once we’re back at camp. Happy and tired faces drink and stuff food in, before a quick rest. Then it’s a packing of gear, before heading down the mountain to our last camp, Millennium.

What a windy night’s stay that was! The porters didn’t recognise me, as I’d managed to cover my whole face through the night. I do remember switching on my head torch in the early hours to be met by a dust fog inside my tent. It managed to cause a few giggles as it looked as though I’d been an extra up the chimney in Mary Poppins! Our support team all gathered for the final songs and tipping ceremony before we headed off for a barbecue at the bottom of the mountain. Such a memorable trek, for all the right reasons. Never have I seen an open group work so well together to achieve a common goal. Their banter, stories, games, songs, and general pleasantness to be around was incredible. Now that the dust has settled, and we’re back in the UK, the guys are genuinely missing the mountain and experience in general.

It was an absolute pleasure guys! Thank you so much Tanzania and 360 Expeditions! 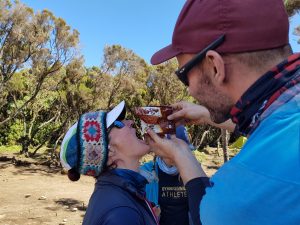 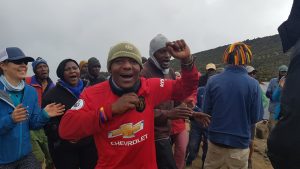 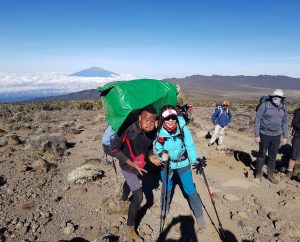 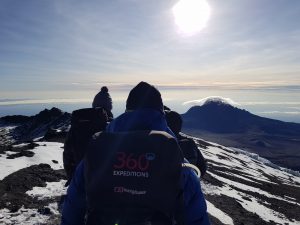 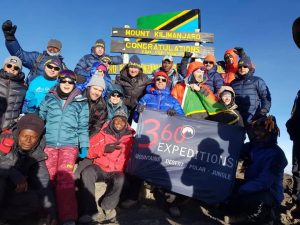 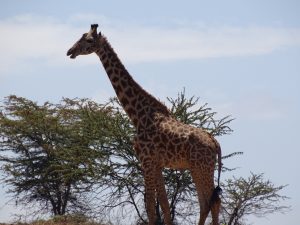