The toughest part of climbing Everest 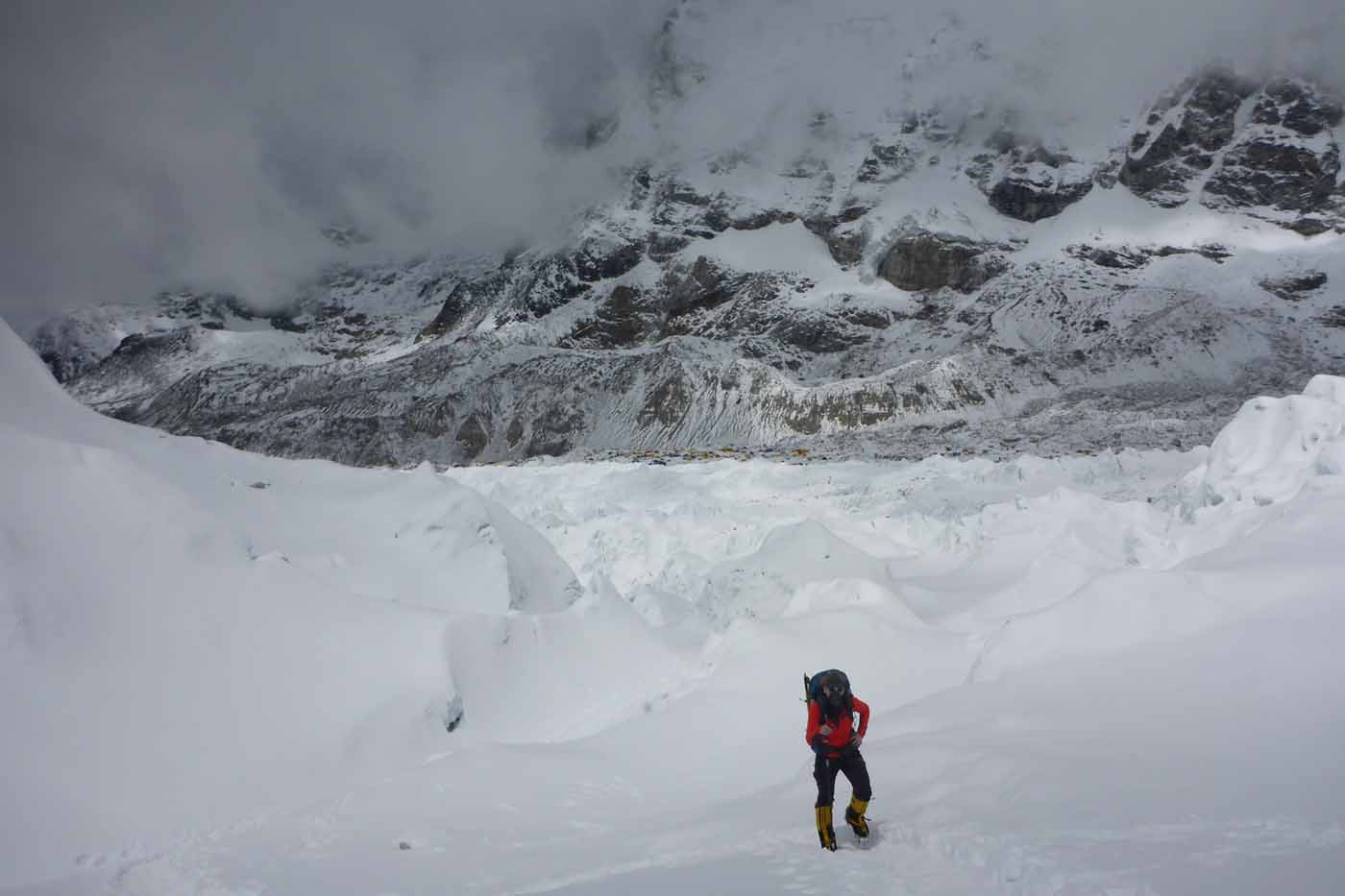 Psychologically the toughest part of climbing Everest was going to be the Khumbu ice fall.  Jo had a nervous time of it on a previous expedition to Manaslu where the ice fall had been very active and where we’d experienced a 4 story size block of ice tumble down next to our tent at camp one. So whilst we were getting acclimatised at Everest Base Camp we kept getting up early and spending a few hours each day progressively climbing higher into the ice fall. An experience we’d actually come to enjoy and looked forward to. When the big day came and we left camp to climb through the entire ice fall to camp one for the first acclimatisation rotation the ice fall with all its quirky ladder crossings and crazy rope sections had become an old friend.

We left early that day and had arranged with Kumar to make a pot of coffee and some toast. He was up before us and all smiles sat with us describing what he had to do this day.  He would not be alive a few hours later.Getting up early to get a good start on the ice-fall is a necessity as once the sun’s rays creep over the west shoulder of Everest the ice-fall warms up and comes alive; all popping and cracking. Looking at it for the first time it appears as if a naughty kid has spilled a box of enormous turquoise coloured Lego blocks down the Western Cwm. It has a menacing reputation but it is in fact very beautiful and in the early hours all feels calm and it is a pleasure to silently move like a tiny ant between the gigantic blocks of ice and the tortured  ice-sculptures bizarrely shaped like no surrealist could aspire to by mother nature’s harsh elemental forces. And to find a way by jumping or via the creaking ladders straight from “Home and Garden” over the enormous crevasses which gape like hungry mouths with routine frequency. 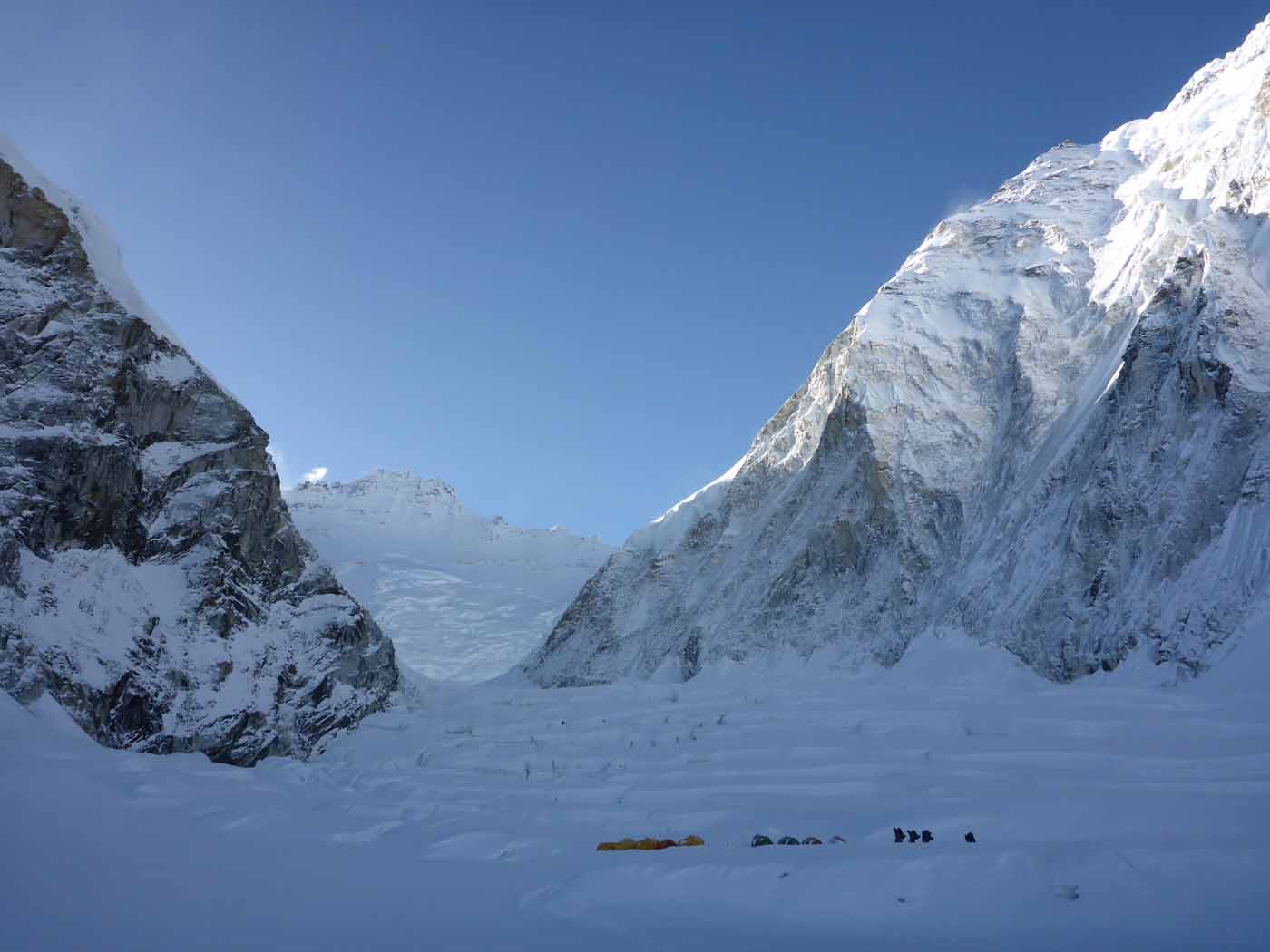 We arrived at camp one above the worst of the ice fall as a whiteout was brewing and started the familiar routine of getting settled into the  tent; Boots had to be un-strapped and crampons removed, ruck-sacks emptied and sleeping kit sorted, ice had to be found for melting into water and the stoves kicked into action. Getting busy I barely registered a huge roar beginning to build up. My initial thought was that an avalanche had peeled of a distant peak but at that moment the entire glacier began to move. Not just a little tremble but actually buckle and bounce! Now feeling concerned I thought that the entire glacier was in the process of sliding of the mountain. The fact that it was an earthquake did not register as my mind could only cling to familiar experiences and these extended no-further than avalanche and serac collapse. The next thoughts were to get out of the tent. Thankfully I still had my boots on so I could leap out immediately and see what was going on outside. I could see nothing as we by now were practically enveloped in a whiteout but I could hear and feel that some extremely big avalanches had been triggered around us. The vast wall of Nuptse (7861 m) and the west shoulder of Mount Everest were beginning to pour some huge avalanches into the Western Cwm at whose bottom end we were literally sitting like ducks on an open pond. Next thing I could feel was the pressure waves which travel before an avalanche. Something big was heading our way but I could only hear the tremendous roar and not see further than 10 meters.

“Now, I am going to die” crossed my mind and I held my breath waiting for the moment to come. To be honest this impression was not one of fear but slight curiosity. I guess the over-whelming roar produced by the continuous earthquake, avalanches and collapsing ice-fall was so over-whelming that fear never really got a look in. What struck me more was how long the shaking lasted and the looks and almost slow-mo reactions of my team members around me. Tom the BBC journalist  doing a story on life on the mountain seemed un-fazed as if this kind of thing happened to him regularly (later he was to report that he’d been terrified), Ingo was standing outside in his long Jons struggling to get into his trousers. When nothing but a huge amount of spin-drift and avalanche dust settled onto the camp I knew that we had survived the event.

A radio call down to Base Camp revealed that bizarrely we had been in the best position on the mountain; Base Camp was destroyed. It was too early to tell who had survived. We tried to settle back into the familiar camp routine but both Jo and I were shaken to the core.  Shortly after another earthquake hit and another serac collapsed below us onto the Khumbu ice fall. This became a regular pattern and made it impossible to really calm down enough to begin to think rationally. I met up with several other guides and a quick sortie to assess the state of the Khumbu ice fall was made. Descend via the way we had climbed up was impossible. The entire infrastructure fixed by the ice-fall doctors had been damaged or was destroyed. Now the waiting game began for the weather to clear and for the choppers who had managed to reach Base Camp to begin the important task of evacuating casualties and fatalities. We had survived the event and were lucky to have done so and as such were deservedly last on the priority list. 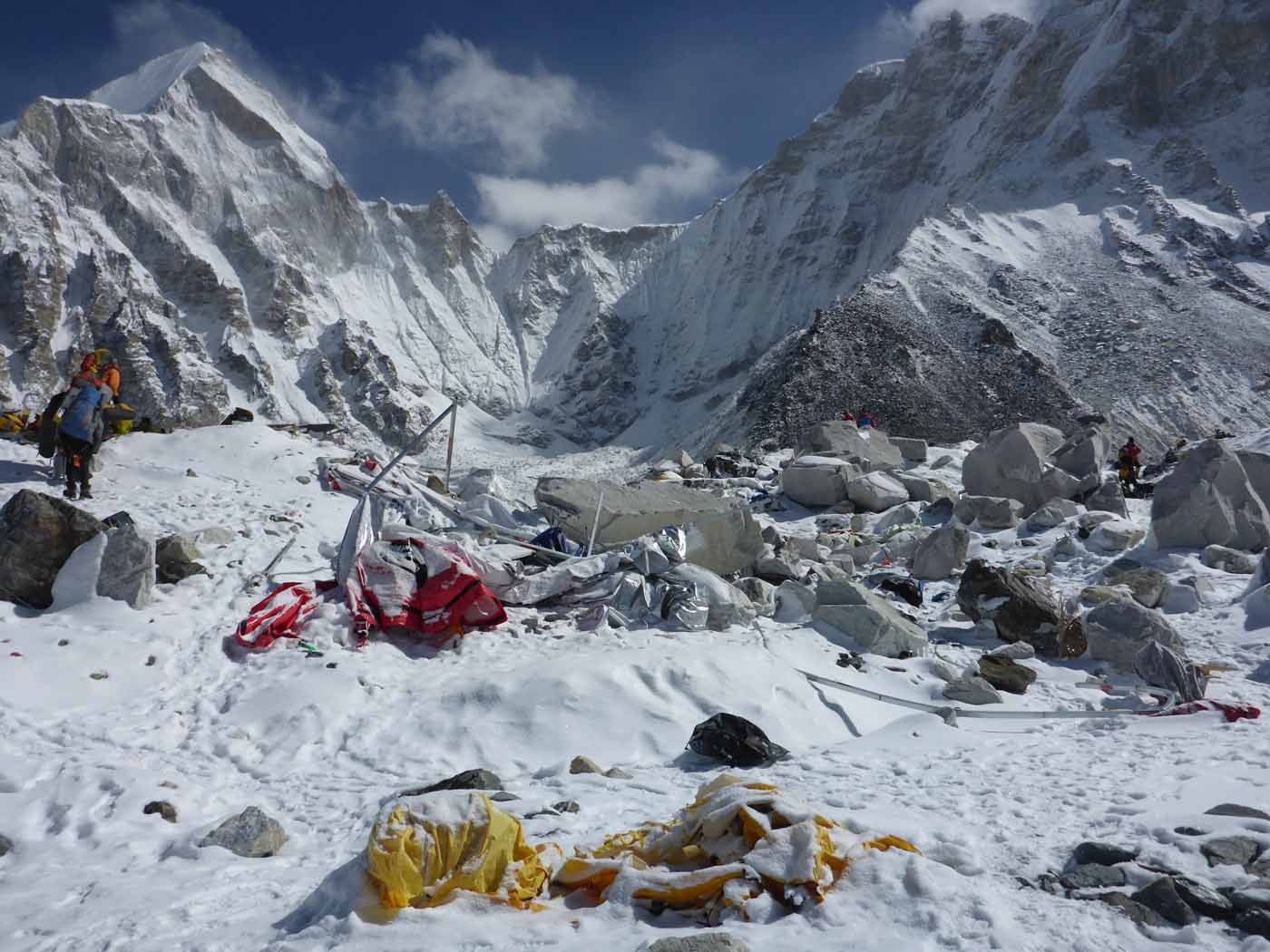 The Base Camp of Mount Everest had been hit hard by huge avalanches triggered by the earthquake from the surrounding summits. What lay below us was a scene of utter annihilation and Kumar as well as many of our good Sherpa friends had lost their lives. The crew I had got to know so well had run for shelter into the camp dining tent. When the dust settled not a trace was left of this flimsy shelter. It was frustrating not to be able to help as we waited to be evacuated for 48 hours enduring one after-shock after another. When eventually we did get a chopper ride back down I was not prepared for the emotions that flooded over me the place that had been our home was un-recognisable, bodies still lay near the heli-pad and people who I had not expected to have survived popped up to give me a hug. Rarely have I felt such a huge range of mixed emotions; I feel lucky to be alive, not to have been in the ice fall or at Base Camp when the earthquake and subsequent avalanches and ice collapse here happened but at the same time guilty at having been so lucky when friends with children back home died such an un-suspected death. As human beings we have evolved with certain toughness and a resilience that is honed by playing the climbing game. Play the game long enough and death becomes a frequent visitor but I was not prepared for the immensity of what happened at Base Camp that day. The un-expectedness of the event and the brutality of its consequences will remain with me to the grave. 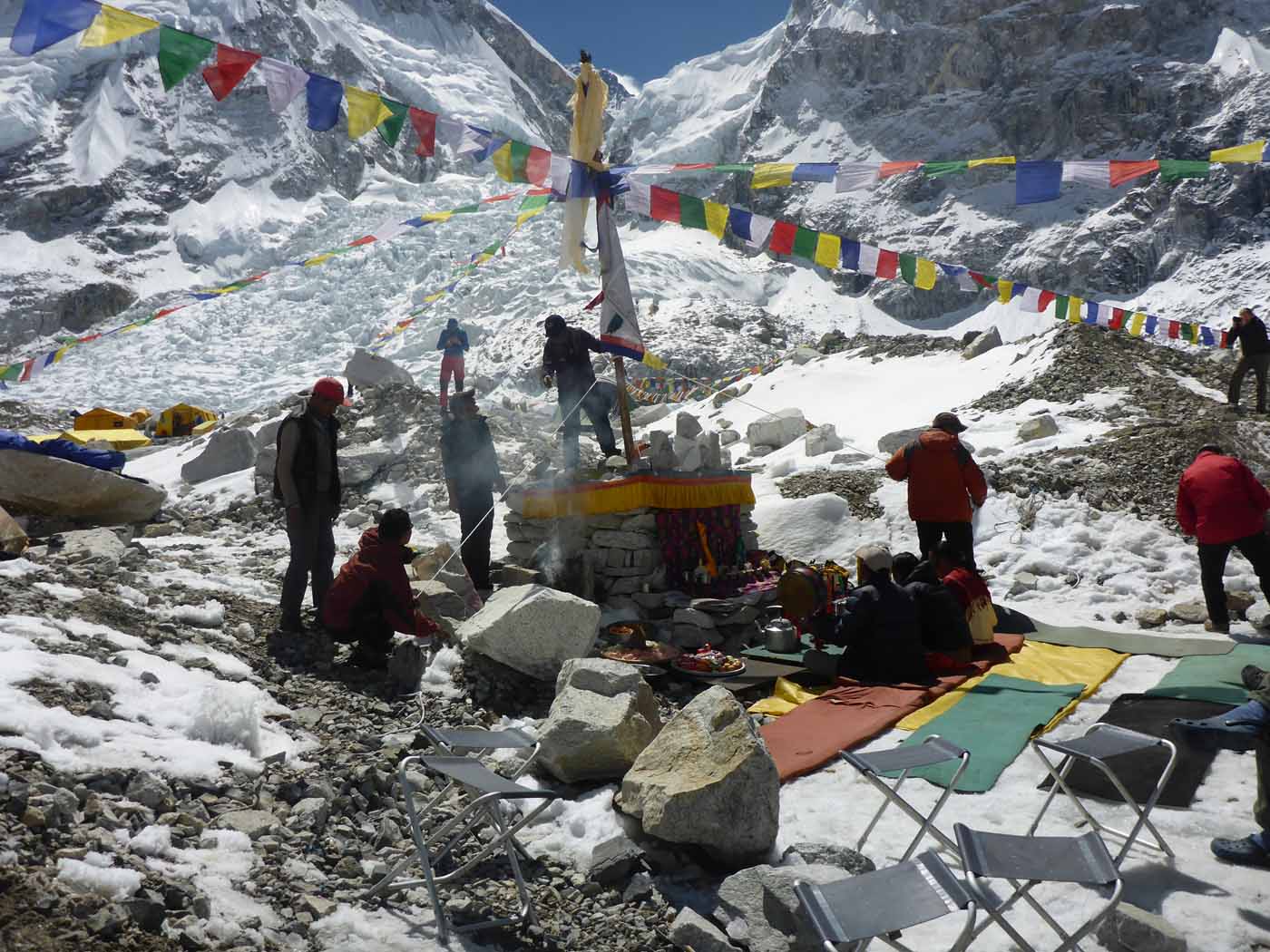