We have a habit as Brits of talking about the weather….alot….and we did, alot! However it would turn out to have more of an impact of our expedition than we would imagine and with a winter of high winds and very little snow, conditions on the mountain were set to be somewhat more challenging than usual.

Setting out from Heathrow on 15th December all bright eyed and bushy tailed we landed with a bump in Mendoza after 3 flights, not much sleep and a master class on Mountain Rules Shit Head later, a little fuzzy around the edges but looking forward to the adventures that lay ahead. Met by Nils, our main guide, we quickly (Argentinian style) sorted out Stuart’s missing bag which apparently was still in Madrid and on the next flight out, and were whisked off to the Hotel Nutibara, our base in the lovely city. A good meal to revitalise our strength, a team briefing and then a good night’s sleep got us into the mood for the next day of kit checks, permit sorting and weather checking before our final meal of steak (had to be!) and our last night in a proper bed for potentially 3 weeks. 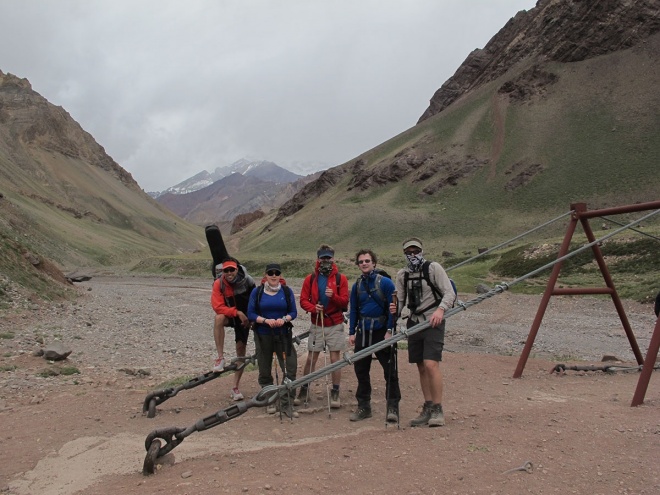 We said goodbye to creature comforts and headed up to Penitentes, 3 hours from Mendoza and a mere 20 minutes from the start of our trek. Time to sort bags and get them weighed before we crammed into the Grajales Landy, along with Nils’s guitar, and headed to the gate to finally start walking, nice and steadily, taking in the scenery with views of the great mountain in front of us. This time of year the weather at Confluencia, our first base for 3 nights, is usually (note the word usually) warm, balmy, pleasant, a time to stock up on a bit of heat, chill out in the sun and enjoy not having to wear woolly hats and gloves.

Alas not for us as we were blasted by strong winds and snow showers on the walk in to camp which then continued for the next 48hrs. 2 good days of acclimatisation followed with a nice walk up to some boulders where Nils and Stu donned their climbing shoes and scrambled over a large rock in snow showers and high winds before our windy walk up to the Mirador near Plaza Francia the following day. All vital days to get used to the altitude to visit the camp doctor and settle into expedition life. Thankfully the weather gods shone on us for our 7 1/2 hr walk from Confluencia to Plaza de Mulas with only a light wind and sunshine. An altitude gain of around 900m, a very long walk and a tough final climb up to camp at 4,300m we were happily greeted by the fabulous hospitality of the Grajales camp and amazing pizza and juice before setting up camp. A rest day followed, time to wander around, get used to our surroundings, make use of the new ‘chill out tent’, play alot of Shit Head and the obligatory trip to the camp Doctor. 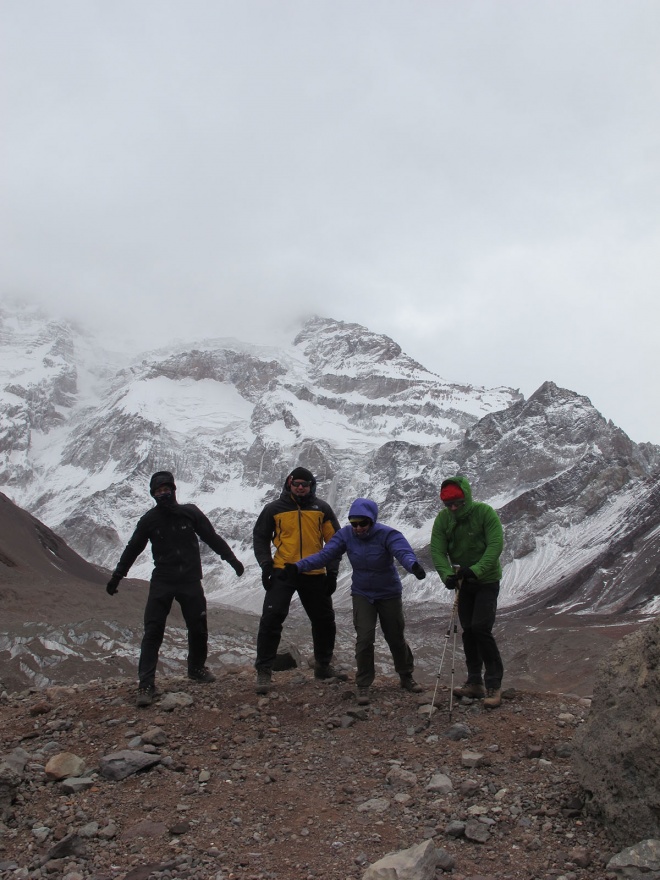 23rd December saw us taking a little hike up to 5,005m, the summit of Bonette Peak. Cesar joined our ‘Groupo Perfecto’ as Nils’s wingman and made the team complete. A great trek up to see Chile across the mountains, chill out at the summit and to take a look across the valley to see our camps and the summit to come on Aconcagua, a daunting but exciting sight! The weather had been kind again but with reports of things taking a turn for the worse, our thoughts turned to the job at hand and our hard work on the mountain to come. An all-important rest day followed on Christmas Eve and our first trip up to camp 1, Camp Canada beckoned on Christmas Day. Santa hats all round at breakfast were swapped with woolly hats and 18kgs of kit. Fortunately for us, a great couple of days of weather ensued and we had a 2 really good acclimatisation and load hauling days, staying at C1 at 5,000m then up to C2 at 5,500m to dump some provisions on Boxing Day before heading back to base and ‘normal’ toilets! Another rest day followed with our final trip to the camp Doctor and a very welcome ‘pass’ stamp on all permits, it was time we hauled anchor and set off skywards for the summit. 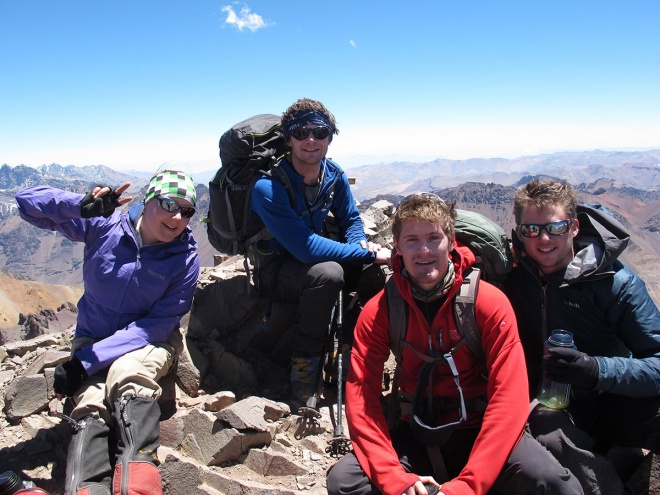 At times like these, flexibility on an expedition is key and our team motto ‘It’s all about the attitude and not the altitude’ came into play even more so. Weather reports stated that the best window was 28th-30th with the weather starting to deteriorate on 31st with stronger winds and then getting worse after that….great! Our summit window was originally 1st-3rd so we aimed to pull this forward by one day, alas the earlier days were out of our reach but with a strong and well-acclimatised team, the 31st was a possibility.

A good walk and another load haul up to Camp Canada for a night were followed by another strong walk up to Camp Nidos des Condores (C2) on 29th. We made the decision on the 30th to haul anchor again and forfeit our rest day to climb up to Camp Berlin (C3) at 5,950m in order to make use of the supposedly ok weather the next day. We were on for the push and the team was up for it! After setting up camp, always a challenge at 6000m, the team settled down for a well-earned rest before a sumptuous dinner of cuppa soup, Ramen noodles and chocolate cake! A final summit brief ensued before Nils and Cesar confirmed that we would be woken up by ‘breakfast in bed’ at 4 am and would head out of camp at 5.30 am….making sure we put more rocks in our tents before we left to make sure they didn’t blow away! 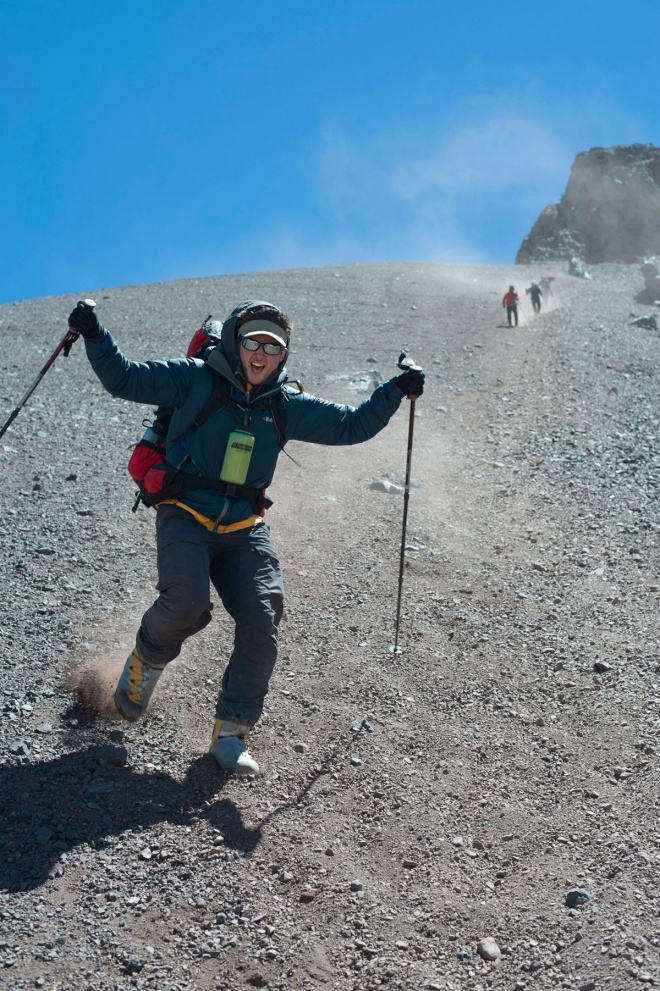 So this was it, summit time. This is what all of the hard work, the slow pace, the water drinking, banking the calories, the rest days, all of the training had all been for, just one day. And so the wind blew….all night. Not much sleep was had by the team and if you can imagine a high-speed train whizzing past your tent every 10 seconds topped up with a rugby team shaking the living daylights out of it, you’ll get an idea of just how hard the wind blew up there, thank god for big rocks! When Nils popping his head into my tent at the allotted 4 am with some energy busting porridge saying we are going for it, you could hear nerves rattling along with the wind in the 2 tents close by housing the team. Cesar then popped in with some sweet tea and biscuits before leaving us to get ready, which at just short of 6,000m takes some time. 5.30 am came by very quickly and with the team donned in just about every piece of clothing they had, head torches on and fumbling around in thick mitts, we slowly headed out of camp.

The wind blew, and blew and blew, bitterly cold, stinging faces, numbing toes, freezing breath as we exhaled. A slow silent walk up to our first stop, watching the group see how everyone is doing but alas Ed had succumbed to the cold and altitude and at 6,100m turned around and headed back down to camp with Cesar, a valiant effort but just not his day. The rest of the group continued up, stopping at Independencia Hut where Cesar rejoined us, before tackling the Windy Gap and heading onto the traverse, trying all the time to gulp down some water and topping up on the energy filled chocolate and sweets. Flat at first, we headed up slowly and steadily, battling the wind and cold all the way until we hit the ascent on the traverse. Usually (here is that word again!) it is snowbound and you can metaphorically skip up it to the caves in crampons….alas not this time. 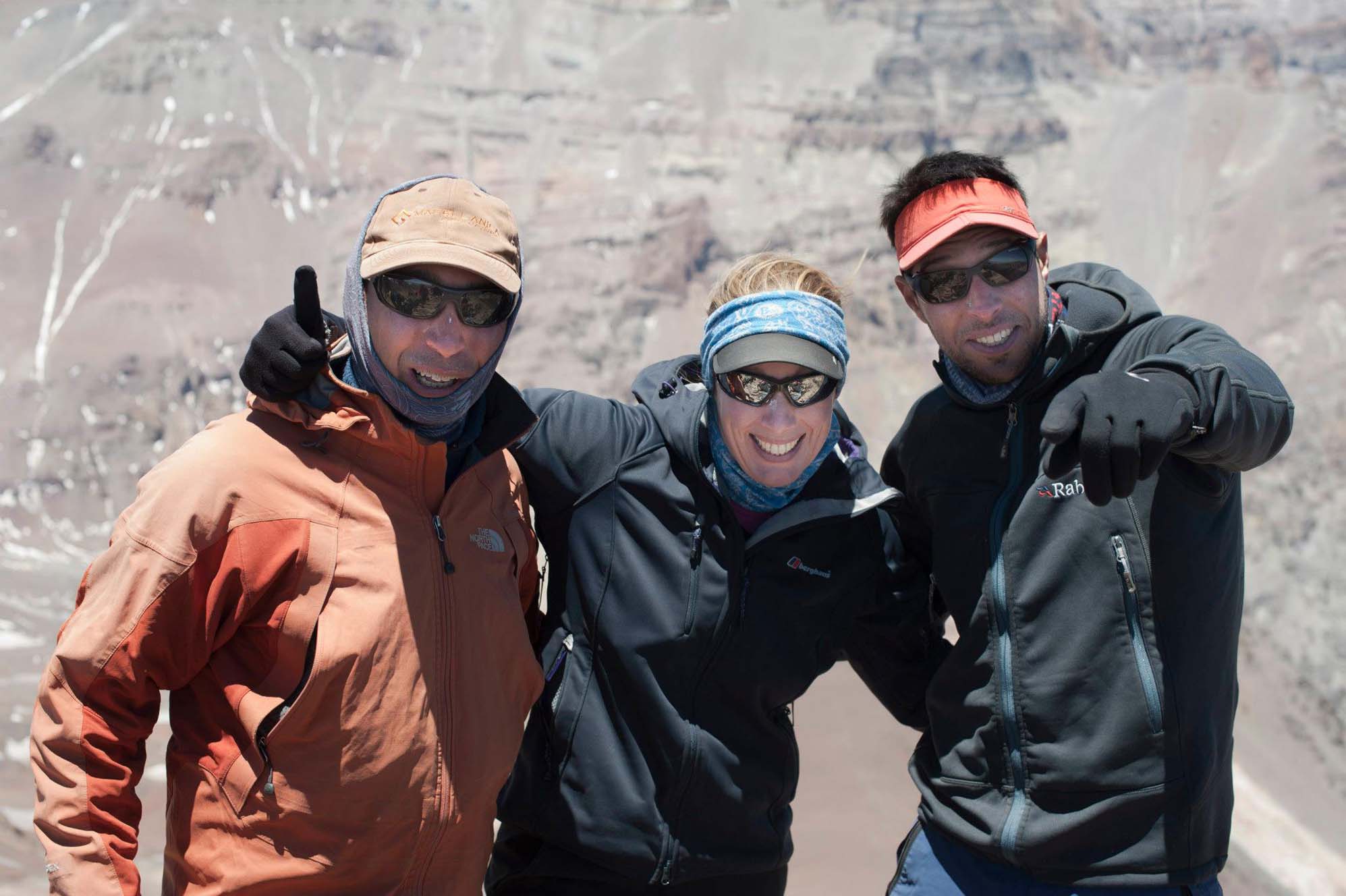 Trying to climb up scree where you do 2 steps up and 1 1/2 down at sea level is hard enough but at 6,500m it’s just blooming murder. With Nils leading the way and Cesar and I pushing on from the back, the team made a valiant effort to scramble up in these hideous conditions. We finally made it to the caves, our final stop before hitting the Canaleta and with much talk about whether we should continue given the conditions, we tentatively said we would give it a go. The team was pretty spent by this time and with thoughts of the long scramble down to camp at the back of their minds, we set out at a crawl. Dan bravely said enough was enough a short while up and headed back to Cesar at the Caves and after another 10 minutes Satu concurred that today was just not the day. A fantastic effort by them both. Stu continued up with Nils and after taking 10 meters at a time, gasping for breath with every step, they topped out at 2.15 pm (5.15 pm GMT) and spent a magical 30 minutes on the summit, a fantastic effort in such adverse conditions. Arriving back at camp at 5.30 pm it was great to have the team back together again, all fingers and toes wriggling and smiles all around.

We left camp in great, if not knackered spirits on New Year’s Day with the kit, equipment and frozen unmentionables strapped to our bulging rucksacks and took a mere 3 hours to let gravity do it’s thing and descend down to Plaza de Mulas to a very welcome beer and pizza, home!! A whole ‘happy box’ of vino tinto was swallowed in celebration of Stu’s birthday along with a fabulous cake whipped up by the camp chefs and the final games of Shit Head that night in preparation of our 37km walk out to civilisation the next day, a walk back to showers, swimming pools, steak and cocktails. 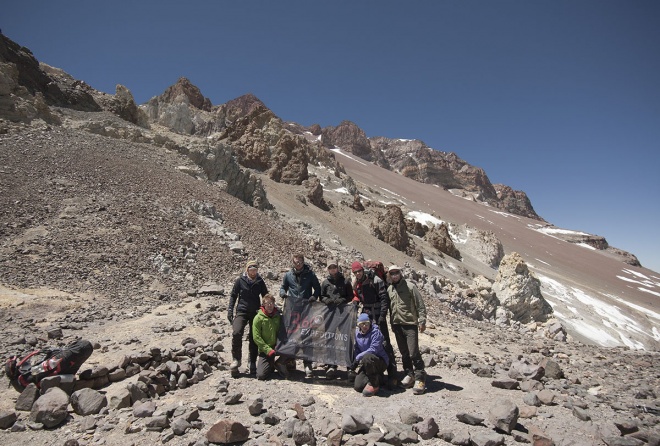 And now, another week on from our trials and tribulations, back in Blighty, it seem a world away from our amazing adventures on the mountain. Alot of ruminating has gone on since our summit day, many ‘what ifs’ and ‘onlys’ but at the end of the day with the crazy weather many teams did not even get a chance to go above Camp 3 and with this being one of the toughest summits the guides have seen in many years our team did their absolute best to reach their summits. Success can be measured in many ways and with an amazing team, so many laughs were had along the way, awesome guides in Nils and Cesar and one kick-ass mountain, I would say it was a success in many ways!

Check out our next Aconcagua expedition  Bookings already coming in so get in touch asap if you are keen.