Alpine starts, this job’s only evil

It’s cold… too cold to contemplate even sticking my nose out of the sleeping bag. Procrastination sets in. Another 5 minutes. Alpine starts, this job’s only evil. We are at 5,800m. Balanced precariously on a ledge called Mera Peak high camp. In the tents around me are a squadron of Scottish Policeman, a crazy Norwegian girl and two Irish guys who have a taste for drink and song. So far so good. We’re all here. It’s only 6 or so hours to the summit but it is -17C inside the tent and even colder outside.

Some Himalayan moments are harder to get used to then others. OK, can’t do this laying about any longer. Battle stations.  I wake the Sherpas. “Boys, let’s get the brew on…conditions are great.” The usual flapping about. People squeezing into layer after layer, fiddling with crampons and harnesses.   Roping up outside the tent. It’s 02:30, dark and bitterly cold. Slight wind.  Anticipation is beginning to fire up everyone’s heartbeat. The only light is the one provided from the head-torch. It becomes the centre of our world as we take the first step into its welcoming orange sphere. Now everyone’s  heart is thumping in their chests. We are on the way, concentrate, step, breathe, step, breathe. We’re climbing up the ever-steepening  glacier. No one speaking, all absorbed in the moment and the dawning realisation that now the hard work is going to pay off – summit here we come. 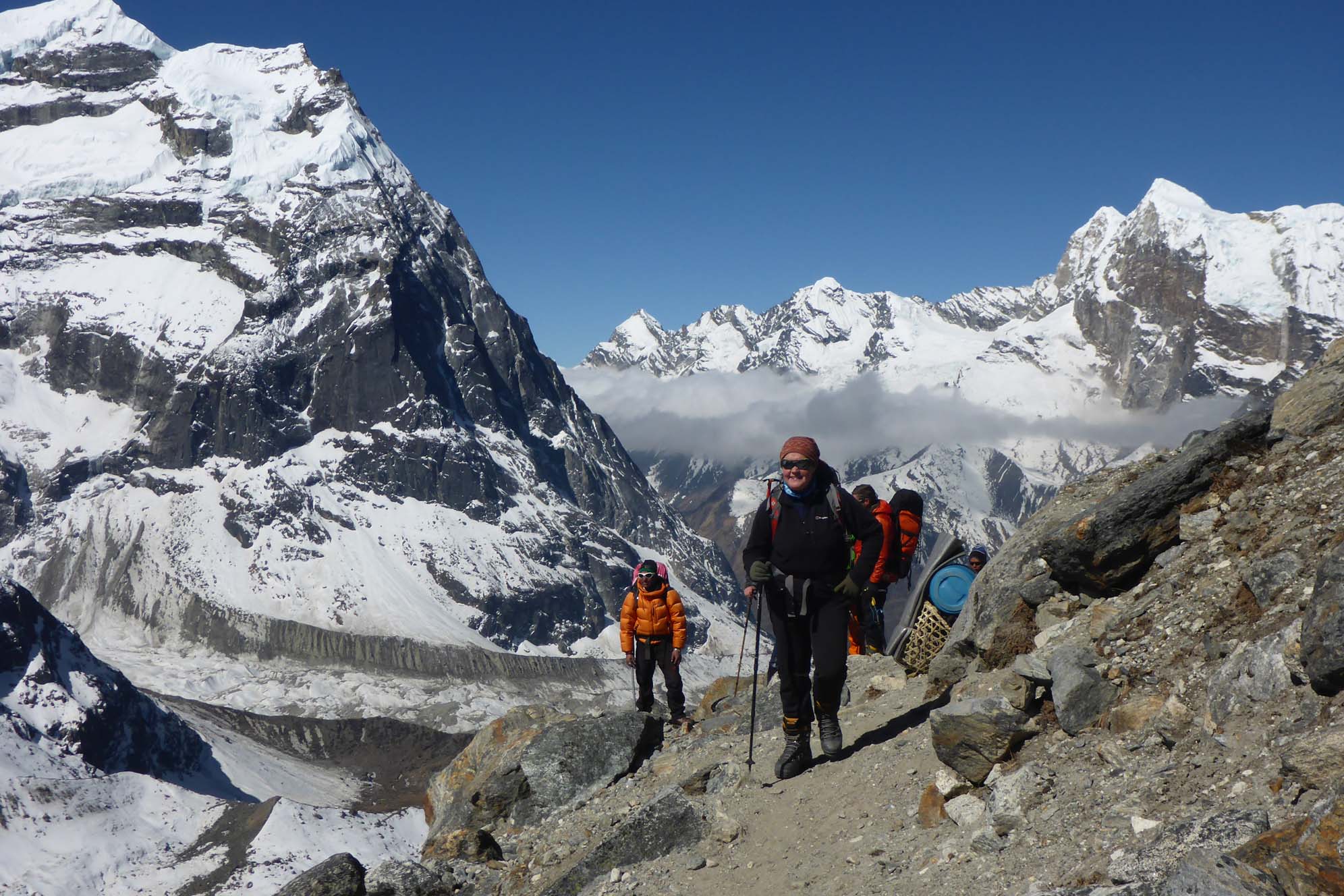 Three hours later the sky begins to light up. And with it the reason for this crazy venture appears: the mighty Himalayas stretch out around us. Every direction is bathed in surreal orange.  We stop for a breather. And stand in awe as we begin to identify our giant neighbours. Everest, already spouting that plume. Makalu, like a giant shark fin soaring into the sky, the gentle snow dome that is Cho Oyu, the distant 5 summits of Kanchenjunga and the massive walls of Nuptse and Lhotse.  God! What difference daylight makes. A quick scan of the sky and it looks like we are going to be in for a good summit day.  Totally perfect – couldn’t have planned it better.   Everyone digs deep and the comfort zone becomes a distant memory as the mountain opens up before us and the summit dome gets that much more obtainable with every step. It is this that is so good about this job; the beautiful futility of what we are doing – climbing a monster peak in the Himalayas to stand for a few moments on its icy back. To be able to look at yourself in the mirror and see a different person, to be able to say “ I did it!”.   Then after a short section of steep climbing we reach our objective one by one. The summit of a 6000m peak in the mighty Himalaya!!! 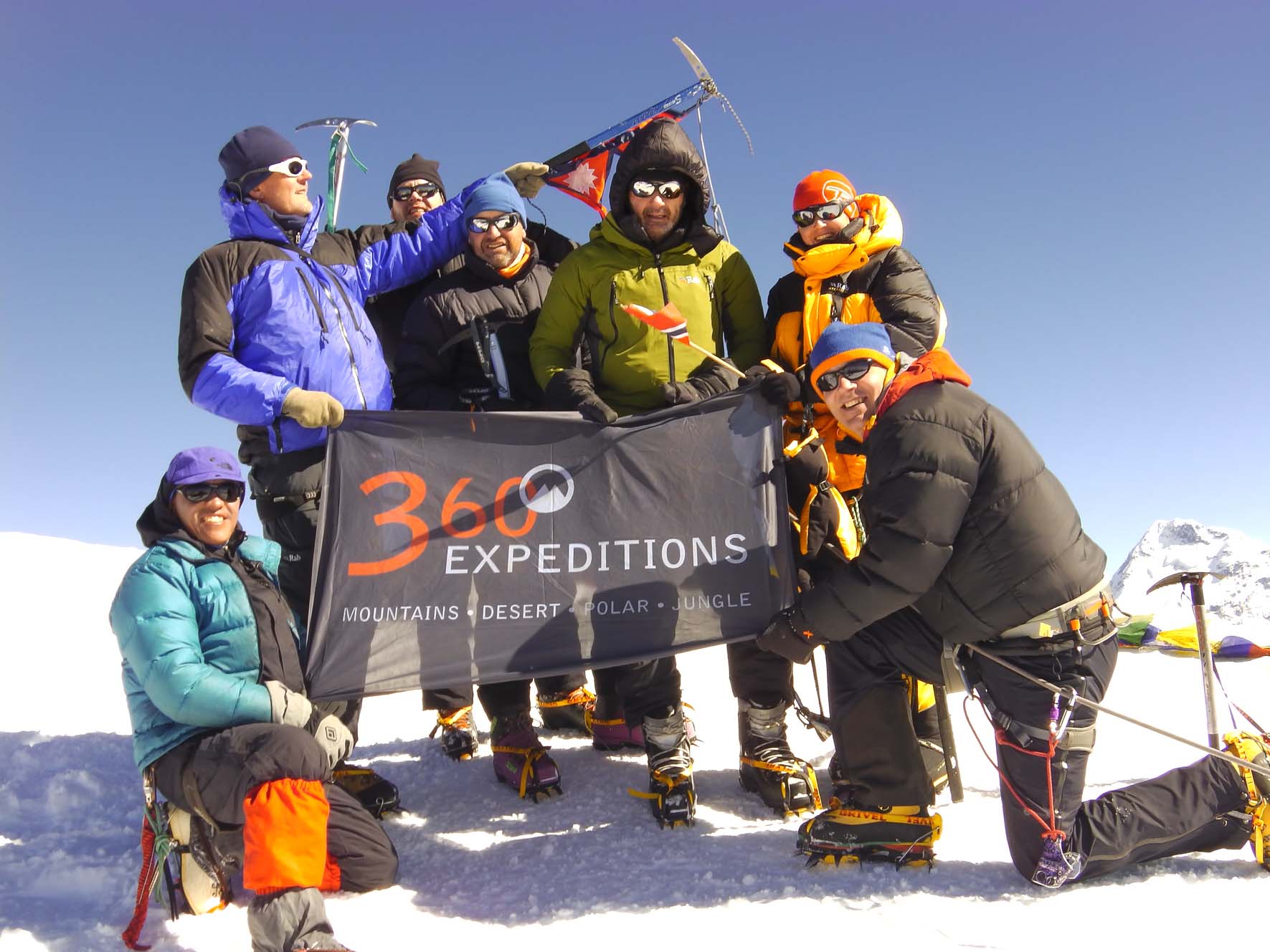 Each one of us lost for words, each looking around in amazement at not only the glorious vista but also inward,  knowing what we have achieved is something too significant to put into words.  Aussie climbing superstar Greg Child put it like this, “How can you duplicate the enormity of such a personal moment? How can you truthfully record the feelings or events when  the intricacies of a second of thought would fry the circuits of a computer? No – it’s like rendering colour memories into muddy monochrome negatives. It’s vernacular butchery. It’s slashing at reality.”