Some say you can’t teach an old dog new tricks. Or any dog for that matter. Well whoever the folk are which spout such lack of enthusiasm obviously never encountered Stefano (76 years old) and the Upstarts. This is not the latest Italian boy-band but the tribe of climbers who came and tested themselves against the highest trekking peak in Nepal; Mera (6,472m). 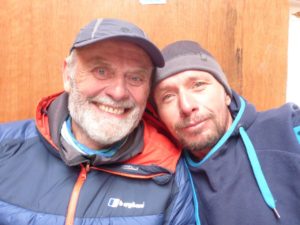 This mountain is a momentous step up for those who have climbed Kilimanjaro and dared to ask what’s next? It’s a proper Himalayan expedition; warts and all. To begin with you need to muster up the courage to fly to the reputed worst airport in the world. This airport pasted like a postage stamp into a rugged mountainside never inspires much confidence but on both the occasions the Upstarts landed here this autumn not a single one of the usual bumps and bounces were encountered. It would be fair to say that from this point of view some people were secretly disappointed! 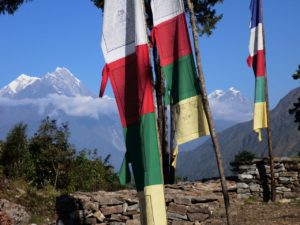 Mera Peak in the background

The trek begins in the town of Lukla and slowly gains momentum and altitude amidst the incredible landscape found in the mighty Arrun catchment area. Stefano and all the Upstarts could not but become entranced by the local Rai and Sherpa people we encountered on the way. We were often invited to participate in a life that has mostly remained unaffected by the hecticness that epitomises our own. A visit to a remote monastery to watch young monks go about the daily rituals of communicating with the cosmos, participating in a Puja, sitting in the Sherpa kitchens, watching the porters receive their well-deserved end of day Chang, flirting with the Sherpani’s and joking with the kids became as much of the experience as crossing enormous suspension bridges and bashing our way through thick Rhododendron forest. 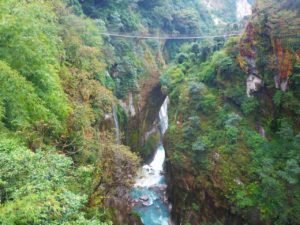 Things began to get the serious big expedition as we entered the Hinku valley for the first time. Here you encounter the mighty Mera and its stupendous neighbours up close and personal. Thoughts of “Can I do this?” creep into the mind. Still Stefano and the Upstarts tackled every day before stepping onto the glacier which leads like a gigantic icy staircase to the conical nipple known as Mera central peak with great cheer and enthusiasm. Can’t teach dogs new ticks? Boof! All climbers took to the new skills learned, the powerful mountain environment and the rough camping conditions like ducks to water! In fact the enthusiasm never waned.

We climbed the route via the icy Mera La, the insanely exposed high camp all the way to the top knowing that even if we didn’t quite make the last 100m or so we each could proudly proclaim to have enjoyed a successful expedition. Success on adventures such as these can never only be measured by reaching the summit. Having gained an insight into the life, hospitality and generosity of people who life a vastly different life to us, having watched enormous avalanches thunder down mountain slopes, seen golden sunsets over the highest mountains on the planet, giving everything you have to arrive at a point where you can give no more. That is what these expeditions are about. And these are the life-enhancing moments which Stefano and the Upstarts will treasure for the rest of their lives. 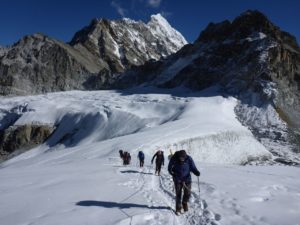 Group of trekkers walking in snow

By all accounts the band will be getting together again and this is the most important measure of success!